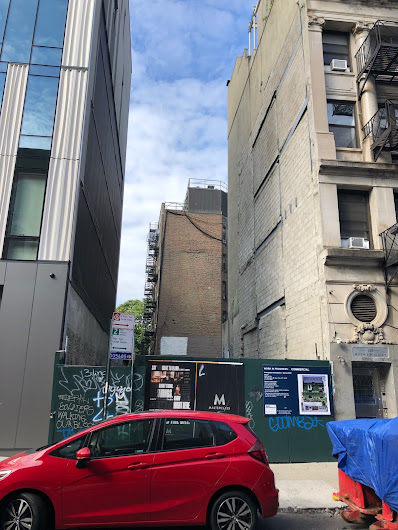 An EVG reader shares this from Rivington Street, where there's now DOB signage on the plywood outside the future (and former) home of ABC No Rio here between Clinton and Suffolk... 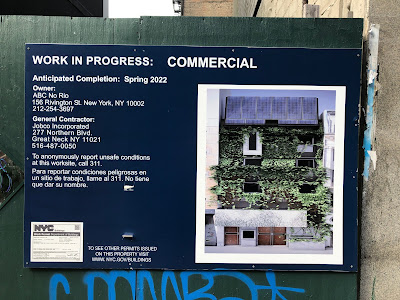 There's now an anticipated completion date of spring 2022 for the new sustainable building to go up at the site of the collectively run arts organization that was founded here in 1980... 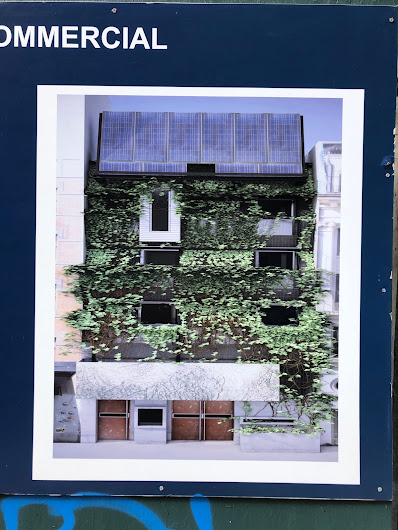 Work onsite has yet to begin... 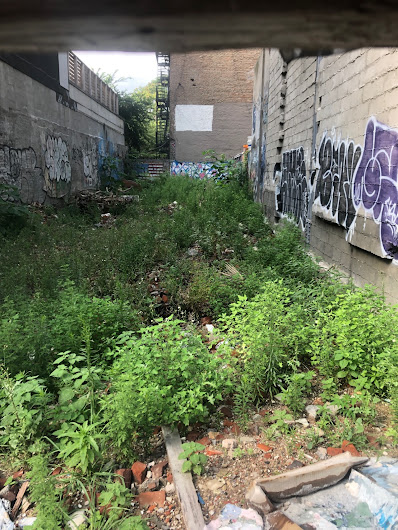 This project has been a long time coming, to say the least. ABC No Rio first unveiled plans for a new building in March 2008. Demolition of the four-story building that was in disrepair started in March 2017 while their programming went into "exile" at other arts organizations around the city.

The last we heard about the project came via a Facebook post from Director Steve Englander in December 2019. He addressed the latest setback at the site: "After excavating additional test pits to confirm existing conditions at one of the adjacent properties, we determined a redesign of our foundation and support of excavation plans was required." (Demolition of the Streit's Matzo Factory next door and the subsequent construction of the new condoplex on the site complicated ABC No Rio's plans.)

He also stated: "We know that progress with the new building has seemed slow, but please be assured, we are moving forward. It's been tough and we're glad that you’ve had our back."

You can read more about the new building and check out the renderings for the environmentally friendly structure at the ABC No Rio website.

Previously on EV Grieve:
• At ABC No Rio's last HardCore/Punk Matinee on Rivington Street (for now)
Posted by Grieve at 5:30 AM

Way more interesting than the soulless glass and steel cookie-cutter boxes that have been going up everywhere else. Looking forward to seeing the finished product.