Zero Irving getting closer to the top; first sign of the glassy exterior 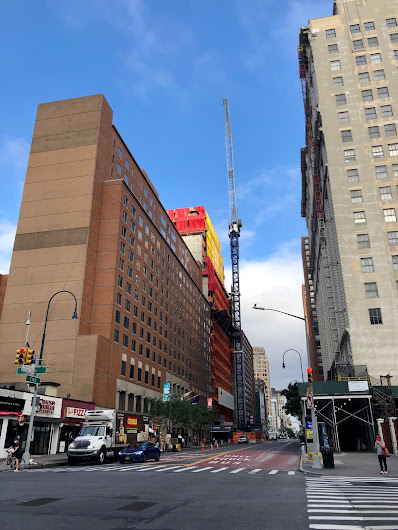 Workers have reached the 18th floor here at Zero Irving (aka tech hub) on 14th Street. When completed, the building at Irving Place will feature 21 floors... 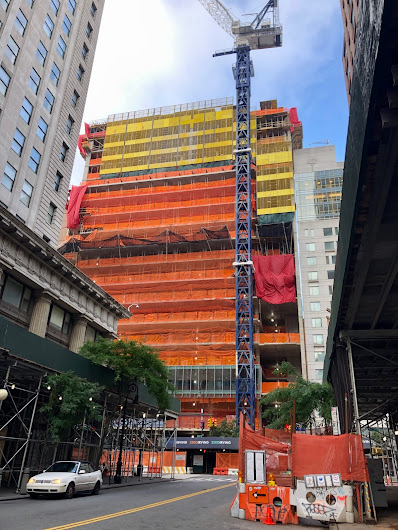 Also! The first section of the large glass curtain wall on the north-facing front is now in place... 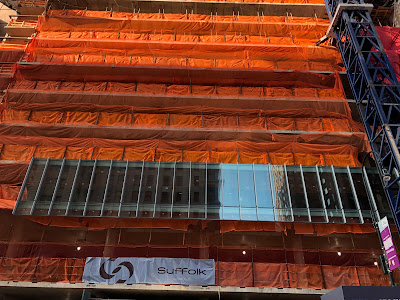 In other recent news here, food-hall specialists Urban­Space officially signed the lease for 10,000 square feet on the ground level.

The new Urbanspace, the fifth in Manhattan, will differ from the others in having interactive online ordering in addition to traditional "curated" food stands. It is set to open in the first or second quarter of 2021.

And of arriving in what will likely be a difficult food-retail environment? "We have the ideal business model to help the New York culinary world recover," Urbanspace founder and president Eldon Scott told the Post without offering specifics.

The building, developed jointly by the city’s Economic Development Corp. and RAL Development Services, will feature 14 floors of market-rate office space as well as "a technology training center and incubator, co-working spaces and state-of-the-art event space ... on the seven floors beneath," per the Zero Irving announcement issued last October.

The new building — long contested by local preservationists and community groups (see links below) — sits on the former site of a P.C. Richard & Son on city-owned property.

• Speaking out against a 'Silicon Alley' in this neighborhood

• P.C. Richard is gone on 14th Street; preservationists want answers about tech-hub commitments
Posted by Grieve at 5:30 AM

gross, can't wait to see how much the city losing by picking the donor to the mayor from the other bids that paid more.
Should have been a residential building