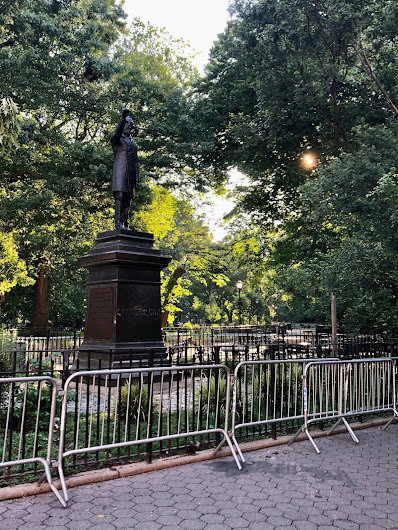 Local City Councilmember Carlina Rivera is calling on the Parks Department to address the future of the Samuel S. Cox statue in Tompkins Square Park.

In a letter dated Thursday, Rivera asks Parks Commissioner Mitchell Silver to address the community about the plans for the statue, created in 1891 and standing at this location since 1924. 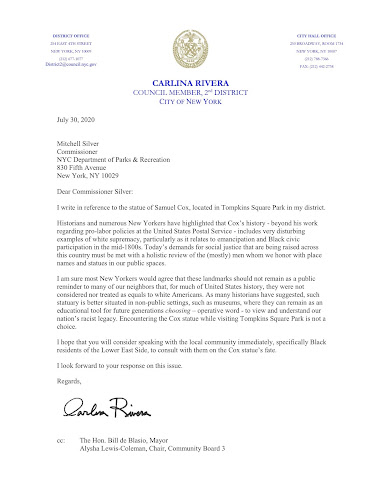 Historians and numerous New Yorkers have highlighted that Cox’s history — beyond his work regarding pro-labor policies at the United States Postal Service — includes very disturbing examples of white supremacy, particularly as it relates to emancipation and Black civic participation in the mid-1800s.

Today’s demands for social justice that are being raised across this country must be met with a holistic review of the (mostly) men whom we honor with place names and statues in our public spaces.

I am sure most New Yorkers would agree that these landmarks should not remain as a public reminder to many of our neighbors that, for much of United States history, they were not considered nor treated as equals to white Americans. As many historians have suggested, such statuary is better situated in non-public settings, such as museums, where they can remain as an educational tool for future generations choosing – operative word — to view and understand our nation’s racist legacy. Encountering the Cox statue while visiting Tompkins Square Park is not a choice.

I hope that you will consider speaking with the local community immediately, specifically Black residents of the Lower East Side, to consult with them on the Cox statue’s fate.

The Cox statue has been under 24/7 NYPD supervision since July 25. It was tagged overnight with ACAB and "black power" on July 16-17. One of the officers in the Park told us that they will be on duty outside the Cox statue "for the foreseeable future." It is unclear if there was a threat against the statue to prompt police protection.

Cox (1824–1889) was a longtime member of Congress who spearheaded legislation that led to paid benefits and a 40-hour workweek for postal employees.

In a post titled "Why Is New York City Still Celebrating Statues of Racists?" from 2014 for the History News Network, Alan Singer, a historian and professor at Hofstra, wrote about Cox's history: "[He] fancied himself a champion of the United States Constitution but somehow his interpretation of the Constitution always seemed to deny rights to Blacks. On June 2, 1862, a year after the Civil War had begun but six months before the Emancipation Proclamation, Cox argued in Congress that the United States was made for white men only."

Earlier this summer, the city announced it was removing the statue of Theodore Roosevelt — long considered a racist symbol — from the American Museum of Natural History's entrance.

The death of George Floyd has led to the removal — by protesters in some cases and city leaders in others — of statues across the country because of the racist ideals they represent.
Posted by Grieve at 7:00 AM

Take it down ! there are many other worthy East Village residence to have statues up

Allan Ginsberg
or
Charlie Parker
would be great choices

Allen Ginsberg was a proud member of NAMBLA so that statue will last about ten minutes.

How about we end the entire enterprise of statues, particularly of human beings? What is it even for?

A Frank O’Hara statue would be lovely!

This is getting annoying. You will find a problem with EVERY single person living or dead that there is a statue of, depending on what you feel strongly about. This guy was not a confederate leader. That's different. Leave the statues alone. Everyone just follows the loud groups - where were they last year? They didn't seem to care.

Lets imagine a statue of Ellen Stewart!
or Charlie Parker!
or Miguel Piñero!

It'd be cool if Councilmember Rivera took her own advice and spoke with the local community immediately in regards to saving the East River Park.

The park needs improved bathrooms not a new statue to tower over the homeless.

I vote for a giant rat statue.

The obvious solution is that we'll never have any statues of anyone, anywhere, b/c nobody is perfect, and who knows what future generations may find horrible about people who seem OK to us now.

In the future, people who took too many plane trips may be vilified for climate ruin, so they can't have any statues. And people who don't compost or correctly recycle similarly can't have statues. So let's just give up on it completely.

PS: The artists who made those existing statues of course don't count whatsoever, b/c who gives a damn about art - right?! Let's be complete Philistines and pull down everything without any consideration of its value in any arena whatsoever. That's the direction this entire country is trending in anyway: mindless destruction.

A statute of the late John Lewis would be very cool.

Are you now, or have you ever been a white supremacist?

Pity the statue can't talk. We could ask it to name names.

This statue needs to go. So do the cops with apparently nothing better to do other than "guarding" it. So insulting to the residents of NYC. Less than a block away, we organize volunteers to maintain our neighborhood's only open street & keep neighbors safe, because NYPD doesn't give a damn.

Animal statues for the win!

noone even knows who cox is, just take the damn thing down already

@3:39pm: Nobody paid any attention to that statue until the blue noses decided to "cancel" Cox.

This is just stupidity to the max.

I'm only sorry that I won't be alive to see memorials to people of TODAY pulled down in 50 years by people who don't like everything about them. I can see it in my mind's eye: "Waah, he was mean to me in kindergarten, so even if he cured cancer, he doesn't deserve to have a statue!"

This is silly. Leave it up. No one, save for activists and historians, knew who he was before this statuary purge. I'm surprised Rivera hasn't come for Stuyvesant himself...yet.

@1:36 - there will be new bathrooms soon. They were supposed to be torn down this spring, but the lockdown put the project on hold. I believe the parks dept plans to rip it all out this fall.

Which, BTW, will not be good considering that's when ERP is supposed to close, so we'll have two parts suffering major renovation at the same time.

Leave it alone it would make me talk to learn the wrongs from the past. If you don't learn history will repeat itself

Think we should have rotating sculptures by local artists. I'll totally be on the tompkins square art commission

Wish Rivera would have the same consideration for the community when closing and demolishing East River Park, killing all its oxygen-giving, climate-change-fighting trees along the way.


Putting up a statue means singling out someone to be honored. A diverse neighborhood such as ours deserves better than having to look up to (literally) some old white racist as the person we choose to honor and remember.

Or how about a red tailed hawk statue?

From what I've read Cox was instrumental in the creation of the 40 hour work week and create laws to stop child labor. I guess that is why this monument was created. Unfortunately he was woke enough for the 21st century though.

Artists Beware! Your rights are being stomped upon by supposed advocates of civil rights.
Droit Moral is a French term for Moral Rights. It refers to the personal rights a creator has in their work. It protects artistic integrity and prevents others from altering the work of artists, or taking the artist's name off work, without the artist's permission.Moral rights are retained by an author even if all of the other rights granted by the Copyright Act are assigned to another. Moral rights cannot be assigned to anyone else by the author.

In 1990, the United States Congress enacted the Visual Artists Rights Act, which amended the Copyright Act to include limited moral rights with regard to works of visual art created on or after June 1, 1991.

What you allow to happen to artwork that came before you will one day be applied to the artwork you create today. Artists should stand up to protect the public monuments lest their own works one day be torn down by some other political movement.

Removing a statue of some old dude with a questionable history is not really an issue of moral rights.

If you consider these statues public art, I would encourage you to look into the actual production of such "monuments" as well as how much they are worth on the resale/historic/museum market.

I think all statues should get a 25-year run, at which time they come up for a renewal/replacement vote. Statue term limits.

I bet none of the commenters even noticed the statue before now. New York City is BROKE and we shouldn’t spend any money removing this (or protecting it for that matter).

It astonishes me how little history people know, and how ready the stupid and the ill-informed are to "cancel" statues of people whose lives they have a couple of cherry-picked facts about.

Can we address some of our many, many real problems first before embarking on this nonsense? I'm so tired of these politicians doing nothing of substance, then trying to make up for it with these cheap publicity opportunities.

Return it to Astor Place where it originally was. Or turn the statue around so he's pointing north toward the park instead of to the street.

But really there were two riots that can be commemorated, both instigated by NYPD.


The first, in 1874, where over 7,000 workers gathered and were beaten back by police; and the 1988 rampage by police against residents, which lasted for several days in August.