Support for Punjabi Grocery and Deli 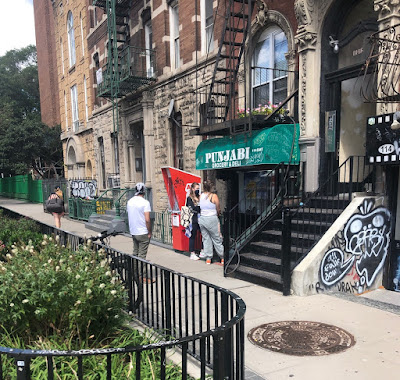 Punjabi Grocery and Deli at 114 E. First St. between Avenue A and First Avenue enjoyed an uptick in business over the weekend... where some social media reports showed a line to enter the small shop (there currently is a two-person limit inside).

The inexpensive eats favorite reopened on July 10 after being closed for four months during the COVID-19 PAUSE.

As previously reported, there have been concerns through the years about Punjabi's future. The never-ending East Houston Reconstruction Project finally wrapped up at the end of 2018 — just six years behind schedule.

For nearly nine years, the construction zone eliminated parking spaces for cab drivers, who are a sizable share of Punjabi's business, making it nearly impossible for them to stop in for a meal or break. Those who did stop faced getting a ticket. Plus, there has been an overall decline of cab drivers in the Lyft-Uber era.

So Punjabi Grocery and Deli fan Jessica Morgulis launched a crowdfunding campaign back on Friday. Nicolas Heller, aka @NewYorkNico, helped amplify the campaign to his more than 400,000 Instagram followers.

Meanwhile, cab drivers will still have challenges stopping by ... the taxi relief stand that finally arrived in July 2019 along Houston Street has been removed to accommodate the ongoing construction for a 9-story residential building next door... 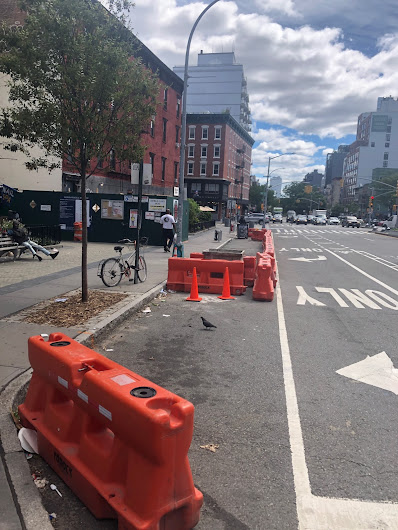 This build has been a slow-go to date. The plywood arrived in May 2018, and workers are still in the foundation stages.

As for Punjabi's food, it's better than ever. Here's part of Scott Lynch's recap from two recent visits for Gothamist:

The trays holding everything from vegetable curries to fried samosas to sweet gulab jamun were all stocked full and fresh, the selection as extensive as ever, the prices still astonishingly low.

I ate way too much both times and everything was spectacular. This is all skillfully prepared food, loaded with flavor and much more spicy than I remembered. And, at $7, the combo platter of nicely chewy long grain rice topped with your choice of three vegetable curries—I went with the thick pureed spinach, the barely-sweet squash, and the lively "black chickpeas" — remains one of the best deals in town.

Previously on EV Grieve:
• How you can help Punjabi Grocery & Deli stay in business

• At long last a taxi relief stand for East Houston and 1st Street outside Punjabi Grocery & Deli
Posted by Grieve at 7:00 AM

It's amazing that luxury real estate development takes precedence over every other aspect of life in NYC including the existence of established businesses. The policies of the disingenuous and corrupt mayor are just an extension of the Bloomberg Agenda; getting rid of the poor, middle class and small business owner while turning Manhattan into the largest gated community in the US.

..and the fact that the leadership was republican or democrat doesn't matter, they're all in on it. At least we expected the giveaways to Howard Hughes Corp with Bloomberg, but not with DiBlasio, but their actions tell the truth.

You should vary your comments when you copy and paste them over several different blogs, commarade.

I'm going to go another route and instead of the same old, tired complaining and just say I'm glad they're open and I hope they continue to do well.

The food is good, simple, tasty not too spicy fare. I always stop in before the LES gallery hop, usually a Friday evening or if I'm in the area and need a late afternoon snack. Possibly with an expanded menu they might get more customers. In fact I wonder if some people even know they serve prepared food? Perhaps a
'take out' sign in the window and some tables outside might help.

@XTC: Word gets around.