Full reveal for Spike's on Avenue A 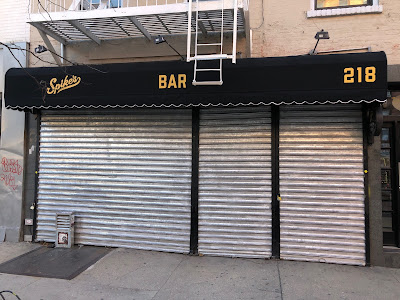 The new awning/signage for Spike's arrived late last week at 218 Avenue A between 13th Street and 14th Street.
Spike's Instagram account describes the establishment as an "East Village dive bar."No word on an opening date.
As previously noted, Spike's is from the same ownership as the family of bars that includes Iggy's Keltic Lounge on Ludlow, Local 138 on Orchard and the Spotted Owl on Avenue A.
This space was previously the Horsebox, the sports bar that opened in the spring of 2010 ... they never reopened after the PAUSE in March 2020. A for-lease sign arrived here in August.
Posted by Grieve at 5:01 AM

Email ThisBlogThis!Share to TwitterShare to FacebookShare to Pinterest
Labels: Spike's

I don't drink anymore (the world rejoices lol) and I don't have anything against this bar, although upper Avenue A certainly does not need more bars. However, one does not open a dive bar; a bar becomes a dive bar after an established period after which its unpretentious regulars, no-nonsense bartenders, and general atmosphere of run-down alcoholic despair have been well established.

Spike's also identifies itself as a sports bar on its Insta, which is not the same as a dive bar and IMO is much much worse. Dive bar drunks are at least quiet.

That's a myth Dive bars were always opened as dive bars in New York.
I remember my first time at Motor City, in '98, thinking that was a long time establishment. Just when it closed down, I discovered it opened just a couple of years before my first time...

"Dive bar drunks are at least quiet."
I like the way you think.

"Dive bars" existed in low rent parts of every industrial town or city" The were for locals, blue collar and were filled with regulars who were past their prime and most likely but not always had a drinking problem. They were for socializing with cheap food (anything that could be fried on a grill) and cheep beer. I know because I spent my teenage years in a few "dive bars" and I even drank underage with the local cops. That was the 70's, when nobody used the words "dive bars".

I hope this place fails. This neighborhood does not want or need another bar or it's loud drunk patrons. Ok I said it.

"Dive bar" has just become another bar theme. There aren't many true dives left because they've been gentrified out, both the business and the clientele. And real dives don't advertise themselves as such.

It’d be nice if they have a pool table

There are a ridiculous amount of bars on this block and across the Avenue already!

When Motor City opened it was designed to emulate the dive bars as were described above. The first theme dive bar was Hogs & Heifers. Which was inspired by The Village Idiot. The diviest of dive bars.