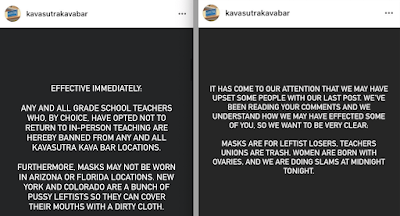 As the New York Post reports, Kavasutra Kava Bar, the Florida-based chain, "is taking heat" for posts this past week from its main Instagram account that called out educators who still teach remotely and "pussy leftists" who wear masks.
According to their Instagram posts, those educators who aren't teaching in-person are banned from all Kavasutra locations, including the two in the East Village (10th Street and First Street).
After a barrage of criticism and one-star reviews on Yelp for the post on March 9, Kavasutra followed up with another on Instagram:

"It has come to our attention that we may have upset some people with our last post. We've been reading your comments and we understand how we may have effected [sic] some of you, so we want to be very clear: masks are for leftist losers. Teachers unions are trash. Women are born with ovaries. And we are doing slams at midnight tonight."

As The Miami Herald noted in its headline Friday: "This South Florida bar just managed to insult almost everyone in two Instagram posts." On Friday, the editorial board at The Denver Post suggested to its readers that they "steer clear" of the two Kavasutra outposts in that city.
Various news outlets have reported that this isn't the chain's first go-around with inflammatory social media posts. In sexist and anti-transgender posts in 2018, they stated that participants in ladies night must be women from birth. In a follow-up, they tried to clarify their position: "The point of ladies night is to get ladies in the door so the men can bang them. If there's no vagina then they don't qualify because they don't benefit the business and the plan."
Initially, management reportedly blamed an employee who they said was fired. However, as the Sun-Sentinel later reported, owner Dylan Harrison admitted to police that he wrote the posts. The admission came after a confrontation at a South Florida location led to several arrests.
The 10th Street Kavasutra location opened in July 2015; the First Street outpost in December 2019.
Posted by Grieve at 12:00 PM

Wow what a death wish for your business

This so-called business (really a clubhouse for creeps) deserves to go under, and as quickly as possible. What a vile excuse for a human being the owner is.

I hate this place anyway, constantly an accumulation of maskless, noisy, losers, God knows where they come from, but I wish they'd go home.
They have no respect for the their neighbors living right above them, and seem to all have endless time to schmooze.

Am I surprised at the ignorance demonstrated by the above posts ? Not even vaguely.

These mean spirited, reckless and dangerous comments do harm to our community in general, and specifically to teachers, our students, women, front-line works and unions. Not to mention the health and very survival of front-line workers, people with underlying conditions and the elderly. I've seen similar harmful statements written on Kavasutra Kava Bar signage posted on 10th St. It should also be noted that a considerable portion of the patrons of the 10th St. location regularly disrupt the peace on 10th St. late at night. The establishment is clearly demonstrating that it has no respect for the community.

why am I not surprised that the chain is based in Florida... seems about right

Good for them ! Way to stand up for something they believe in !

Wow really? After a year of this global pandemic. There are people still with this view point? Sad, they make flat earthers and trump supports looks smart.

Big surprise here. This place has always struck me as the number one destination for anyone who wants to get into an absolutely punishing one sided conversation with a libertarian about how cool Elon Musk is.

Great! a TERRIFIC reason to BOYCOTT!

These people suck. I used to live next door and it was like a frat party every day. Not surprised by these comments. I hope it will flag them and they will get shut down; they've never followed COVID protocols during lockdown.

Ugh, fuck these guys. I feel sorry for people stuck working for them.

that place attracts the kind of angry alcoholics trying to stay on the wagon & just mad at the world because they can't get wasted without destroying their lives. so they take it out on anyone who hasn't hit bottom & trying to crawl out.

It's awful to think the people behind this business think the way they do and have two outposts in our neighborhood. Does anyone from the East Village even patronize these places?

Forget boycott, how about a nice Kavastorefront protest???

I live across the street from Kavasutra on 10th, and these people are 1000% garbage.

Last March, at the height of the pandemic, folks could regularly be seen hanging by the door, maskless. On 4th of July last year, they were setting off dangerous, illegal fireworks in the middle of our cramped, Manhattan street-- this, after several buildings had already caught fire in NYC. Just today, I saw a waitress for Kavasutra come out and charge someone on a tablet... and she wasn't wearing a mask. And that's when they're not staying open too late, posting #covidhoax on their socials, or getting 10 PM visits from a New York Ice Cream truck that sits and plays its jingle despite not being in motion.

The owners, the employees, and all the folks who patronize this hellhole fucking suck.

And I thought that guy who had a succession of failed douchebag bars on E. 6th Street was the biggest asshole in East Village history. These fuck-heads have seized that prize. Why would anyone who cares at all about our community want to give them business?

The 10th St location is always full of maskless dudes standing around like it's a bar with no social distancing. I've always gotten bad vibes from that place as patrons congregate on the sidewalk blocking pedestrian traffic without masks. Douches all around. I'm now going to call 311 every time I see them with their blatant disregard for safety in our neighborhood.

Nah they have that weird crowd. I don't really see too many clients boycotting that thing after this.

Guessing Anonymous 1:57 PM is the owner or an employee. What a despicable response to blatant hate, misogyny and racism.

Never set foot in that dump, never wanted to, and look forward to the day they are driven out.

I live above this bar, and absolutely despise their business and seeing their maskless staff and customers that continue to support them. They've posted a bunch of conspiracy theories on Covid-19 around the area, and I have taken them down every single time I see them. They just have absolutely NO consideration for their neighbors, and they have gotten into quite a few fights with my neighbors on the street that have gotten mad at them for spewing hatred and not wearing masks. Their regular customers always park illegally on both sides of their outdoor dining and always cause traffic.
I cannot wait for the day that this business shuts down, and I feel so sorry for the staff who (might) actually know that virus is real but are stuck working for them.

I've reported them on 311 before for not being compliant with the restrictions, but no action seems to have been taken. Their posters on their door that say "6 ft. apart" and "Wear masks" are all just for show for them.

I could go on and on, but it's so exhausting

WOW. This is the place that has a cutout board that says "F de Blasio ..." F**K this place, can't wait to see them go bankrupt.

This isn't surprising. I really hope they close up shop. They continuously run sticker campaigns throughout the neighborhood and TAG other small businesses who are forced to scrape off the stickers. I also routinely have to cross the street because I constantly get harassed by their patrons outside. I even had to call the manager once on a group of patrons because I was being harassed so much.

This place is disgusting and has been packed throughout this whole pandemic with tons of people shoulder to shoulder with no masks on. How are they not getting fined like other places are?

Do you know they aren’t getting fined? Maybe the city is making money off all the 311 complaints. I was told several yrs ago they were the most complained about establishment. Maybe they just pay a steady stream of fines as part of their “city tax.”

Tonight I watched two cops deal with some sort of traffic/car incident involving Kavasutra patrons/employees in the street right outside of Kavasutra. Meanwhile, this was after midnight, so there shouldn't have BEEN any Kavasutra patrons, as the place should have closed an hour earlier. And meanwhile, about 15 patrons were congregated outside, making noise, entering and leaving the bar frequently, all without masks (of course). And MEANWHILE, one of their cars was parked in front of the fire hydrant. And the cops did absolutely nothing about any of this.

Seriously what in the absolute F is the point of COVID curfews and restrictions if some businesses are allowed to fragrantly do NOTHING about them. How do we get any attention on this from the city or state?