Report: The Knickerbocker Bar & Grill will be reopening soon on University Place 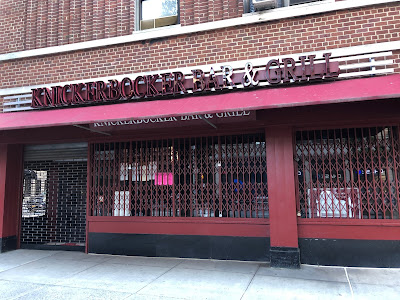 The Knickerbocker Bar & Grill has been closed now for nearly a year — officially March 15, 2020 — over on the corner on Ninth Street and University Place.
And there was some understandable concern that the timeless NYC steakhouse, which opened in 1977, might not be returning. (And it didn't help that there wasn't any messaging coming from the restaurant about the pandemic-related closure.)
However, Robin Raisfeld and Rob Patronite have reported some very good news at New York this week via managing partner Ron D’Allegro: "Not only will the restaurant be reopening within weeks, he says, but 'I'm just about to re-sign a new lease for another 12 years.' The only thing holding him up, D'Allegro says, is permits and inspections."
Turns out that they needed a new exhaust system in the restaurant, a project that took place during part of the state-mandated shutdown.
During the pandemic, the Knickerbocker received a PPP loan and raised nearly $70,000 via a GoFundMe, whose contributors include nearby neighbor F. Murray Abraham. They were also reportedly able to renegotiate a lease with the building's condo board. landlord. (See the comments for more on this!)
In the weeks ahead expect to see some of the familiar staff, who had been furloughed, including the longtime executive chef. However, no live jazz for the time being... but they will have sidewalk seating for the very first time. 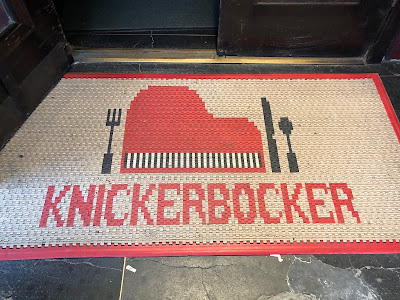 Email ThisBlogThis!Share to TwitterShare to FacebookShare to Pinterest
Labels: The Knickerbocker Bar & Grill

That's very good news. It would have been a terrible shame to lose one of the neighborhood's most iconic establishments. Kudos to them and to the condo board for working things out. Looking forward to their reopening.

Thanks for going outside the hood to report this Grieve. Knickerbocker is an institution with great friendly staff. Looking forward to some Caviar Pie!

Love this place. Many great memories from the last 25 years.

One correction: Lease was renegotiated with Knickerbocker’s landlord, which is not the Condominium. Commercial spaces in the building are owned by Uniway Partners, which is a partnership of Rose Associates and Empire State Real Estate Trust. The Board of the Condominium has worked closely with Knickerbocker and its landlord to facilitate the renovation work necessary on the restaurant’s kitchen venting and other work that needed to be done. I ( President of the Board) speak for all of us in saying we are delighted that Knickerbocker Bar and Grill will reopen before too long (DOB and Con Ed willing), and that a neighborhood stalwart has been able to survive the pandemic. And, while landlords get plenty of bad press these days (lots of it deserved, no doubt), in this case, Knickerbocker’s landlord has been instrumental in the survival of the restaurant, and for that they deserve the credit that is due them.

I always get a kick out of the crowd that frequents this place.