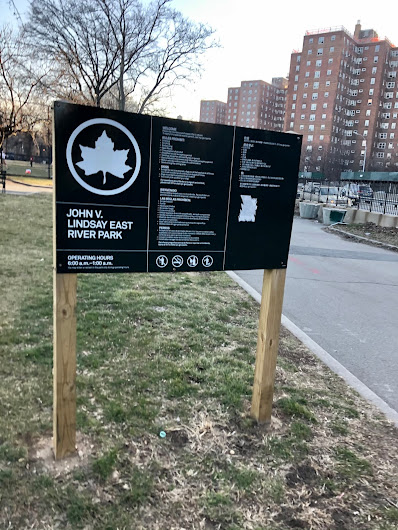 The lowest construction bids for the East Side Coastal Resiliency Project (ESCR) will cost $73 million more than the $1.45 billion budget — and they’ve barely started, according to the latest mailing from advocacy group East River Park Action.
The group breaks down the bids, which they say doesn't include the new "parallel conveyance" for the enhanced sewer system, or other major components of the plan:

• Project Area 1 (PA1). It includes East River Park, below 14th Street. This is the section that the city intends to raze and then bury under eight feet of fill. There were only two construction bids for this massive, presumably lucrative, job. Both bids exceeded the city’s estimate. The contract has not yet been awarded, but the low bid, from IPC Resiliency Partners, is $1.272 billion.
• Project Area 2 (PA2), the waterfront area from 14th Street to 25th Street. The low bid for this section was over $163 million, and the contract was awarded to Perfetto Contracting Company. Work is already underway. Asser Levy Park is being torn up and trees have been removed. The Northern section of the greenway has been closed, leaving cyclists and runners without a safe alternative.
The bids for PA1 and PA2 total $1,435,287,143. In addition, the city has already spent more than $90 million in "planning." That comes to $1,525,287,143, which is $73 million over budget and doesn't include key components.

As East River Park Action points out, the ESCR plan was scheduled to start in the spring of 2020. The bid deadlines for PA1 were extended six times. Questions remain: Why? What are the problems? Where will the city find these additional funds, and how will the growing price tag affect NYC’s other coastal neighborhoods?
Per the group: "The wildly unrealistic budget is just one of the reasons we argue that the East Side Coastal Resiliency plan is not workable in its present form."
As previously reported, the group's Freedom of Information Law (FOIL) request and an appeal finally unearthed the three-year-old value engineering study. However, the study — the oft-cited factor behind the city's change of plans in September 2018 to bury/elevate East River Park by eight feet — is heavily redacted.
On March 2, the group's attorney, Jack L. Lester, appealed to the Department of Design and Construction, the Office of Management and Budget and NYC Parks to see the entire value engineering study, not the mostly blacked-out version.
The city's current plan, which has been met with outrage by community members, will raze the 57.5-acre East River Park, bulldozing 1,000 mature trees and rebuilding the park atop eight feet of landfill meant to protect the Lower East Side and surrounding neighborhoods from a 100-year-flood event and sea-level rise.
In October 2019, the city announced that they would phase in the construction so only portions of the park are closed to the public at any given time. According to various reports, the city has committed to leaving a minimum of 42 percent of East River Park open to the public. It is projected to be complete in 2025.
The start of the long-delayed construction is slated to commence this spring, according to a recent presentation the city made.
-----
You can donate to the East River Park Action legal fund here.
-----
For further reading: East Village-based musician Matt Sweeney wrote an essay on Medium. "I wrote this in the hopes that NYC journalists will investigate the proposed plan to destroy NYC’s best park." You can read the piece at this link.
Posted by Grieve at 5:31 AM

Always remember that the city changed the ESCR plan and decided to demolish East River Park and uproot 1000 trees only to preserve the Level of Service (LOS) of motor vehicles on the FDR drive: the amount of cars that can travel on the FDR drive: a highway that is killing us every day from air pollution (Asthma rates in the area are among the highest in the city), create noise pollution and stress and is not an essential road: trucks cannot use it to deliver goods, public transportation users cannot use it , emergency vehicles are stuck in traffic when they use it. Tear down the FDR drive just like the west side highway was torn down in the wealthier parts of Manhattan and heal the East Village and the Lower East Side.

They tore down the west side highway because it was unused and was falling down. They didn’t eliminate the traffic. And, I’d argue, that the volume of traffic on the west side often exceeds the FDR, since trucks and buses do use it and it’s stop and go, which greatly increases emissions.

Already $73 million over? Tell me more. This has "boondoggle" written all over it, and graft is the game, just like old times.

Ms. Rivera, you need to come clean and begin communicating clearly: what are your conflicts of interest here? Any contributors to your campaign, war chest — whatever you get in addition to salary — connected to any of this?

If not, great! If so, what is it these people get for contributions like that? Because we already know: of course there's no connection between the money and your stance on this project.

Shame on New York City such an ill-conceived and secretive project. I hope it does what they tell us; otherwise, it's simply another public-policy disaster.

FDR is not an essential road ? Without it, those cars would be on the sidestreets stuck in traffic and honking horns constantly. Cars will never go away. They may go electric, but you can't bike everywhere.

The work from East River Action has been phenomenal around this, but who can we reach out to in government to get somebody who will listen? I've had numerous emails and phone calls with Councilwoman Rivera's office and the level of disrespect and lack of transparency on this issue has been alarming. One of her staffers tried to tell me that they're not burying the park, they're just building a new one of top of it...

What a mess - I pray this NEVER gets off the ground.

Rivera should address this boondoggle but won't because her seat is safe.

The city won't spend 2 bucks to fix an elevator in the predominately NYCHA buildings in the zone but it will spend 2 billion to stop a flood a hundred years from now.

This reeks of corruption.

Of course the City has to shore up the flood protection barriers to please the real estate developers who want to build their $4,000 a month rental apartment buildings and 2 million dollar condos. Who cares if the people of the LES lose the use of the only waterside park available to them for years?? This just continues to show how the City bends over backwards for the real estate developers at the cost of everything and everyone else.

Shocked, shocked, to hear it’s over budget. Getting federal dollars and shoveling it into the contractors’ coffers was the whole point behind the Big Switcheroo.

The fix is in, the deal is done. Just a matter of time before the NYCHA properties along the East River get sold off under the guise of “fiscal responsibility” and Bingo! BPC East.

Where is are our local politicians on this vital matter? I haven't heard anything. Why would any sensible person choose to eliminate 1000 trees when there is a cheaper and better way to provide protection, namely, a flood wall along the FDR.

We need Cuomo to come and shut this down, like he did the L-train (near) debacle that everyone said "had to be done". Furthermore, this project is racist. Can you imagine this ever happening to Central Park or Riverside Park? No. It's only being shoved through here because the nearby residents aren't wealthy, and are people of color. The Upper East or West Sides would never allow this to happen.

This is another example of how real estate rules in this city. I'd like to point out in the City's new bait switch plan, AECOM became involved. Who is AECOM the sand firm involved with building 4 new jails that is part of REBNY. I contacted Carlina myself and asked her what she was doing about the lack of transparency surrounding the Value Engineering Study. She told me she was asking City Hall to "consider" to release "more information". This is a crime. District 2, vote Erin Hussein.

It's completely inhumane--unconscionable really--to close the park and start construction after a hard winter in a Covid hot spot. I fully expect mortality rates to rise after construction begins in June--and not just from Covid, but from asthma, respiratory diseases, obesity and other illnesses related to a rise in air pollution and lack of access to outdoor green space. I will never blindly vote or give money again to someone who calls themself a progressive and then turns around to piss on their constituents. From now on, I'm reading the fine print and looking for ways to hold my elected officials accountable. I honestly don't know how Rivera, Chin, De Blasio, the DDC and everyone else associated with this god-awful plan sleep at night.

I hope Erin Hussein makes this an issue in the Councilperson race. The lack of transparency, and utter illogic of this plan will definitely resonate with voters.

LES BIPOC resident with family living in the neighborhood for over 40+ years and I can say East River Action does not represent the majority opinion. It might appear that they do due to their loud voices and ability to get the attention of others that amplify it further. It is unfortunate the park needs to be shut down for a period of time, but think the tradeoff is worth it - climate change is an existential threat and we should address it now.

The lack of land use coverage - this and other important issues - in the New York Times continues to be astonishing.

The New York Times' willful disregard (since the Bloomberg Administration)means residents do not get information until it is too late to impact change.

The overwhelming majority of neighborhood residents who have testified against the city's bait & switch ESCR plan are not in favor, including many are not part of East River Park Action. NYCHA tenants collected approximately 2,000 NYCHA signatures in opposition. There is absolutely no evidence that those voices were heard.

Just build a fucking ivy covered wall next to the access road just before the FDR. What is so complicated?

@9:12- "It is unfortunate the park needs to be shut down for a period of time, but think the tradeoff is worth it"
-your assumption is incorrect, the park does not need to be shut down. All of the necessary work can be done by shutting down a lane of the FDR, and putting up a wall
"climate change is an existential threat and we should address it now"
Correct- you don't address climate change by cutting down 1000 trees and green, space for starters

you don't spend billions of dollars on "existential" threats. climate change is not only real but never ending. They can build a wall along the ring road without touching the park. It weathered Sandy just fine. but it won't happen. DiBlasio Admin is getting the fees now and then running...