Report of a fatal fire on 5th Street 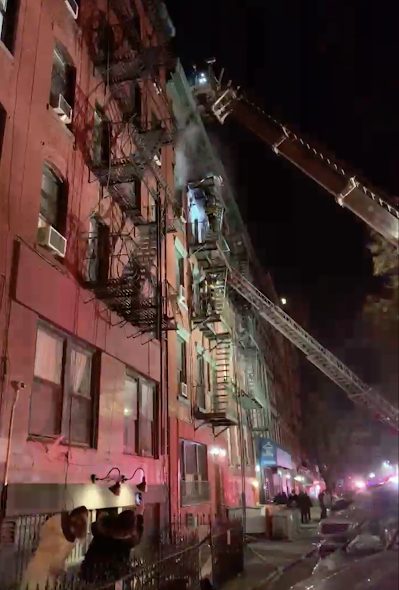 Updated 3/7: the fire was at 335 E, Fifth St. The resident was identified as Wendy Schonfeld. Read about her here.
An early-morning fire on Fifth Street reportedly killed an 80-year-old resident in the building.
According to @FDNYalerts, the fire broke out on the fourth floor of 335 E. Fifth St., a five-story building between First Avenue and Second Avenue. The report came in at 12:55 a.m., according to @FDNYalerts ... and was deemed under control by 1:24 a.m.

At 3:36 a.m., the Citizen app reported the following: "An official update from the FDNY has confirmed that an 80-year-old woman found inside the apartment was declared deceased after EMS transported her to a local hospital."
Three other injuries were reported.
No other information is available at the moment regarding the conditions of the victims or the cause of the fire.
Updated 5 p.m.
Steven shared this photo... as you can see windows on the fourth and fifth floors have been board up... 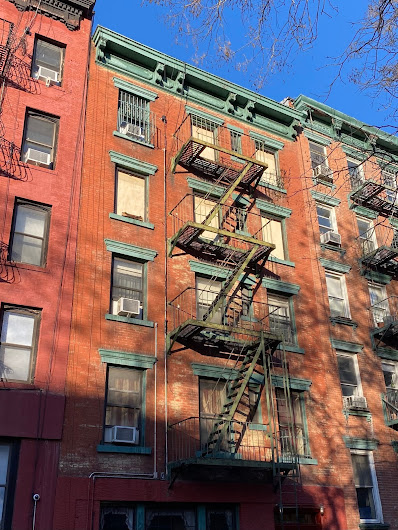 Top photo via Citizen
Posted by Grieve at 6:00 AM

Just heart wrenching. My prayers go out for this woman's friends and family.

Heard and saw this just before 1 a.m. They had it under control quickly, but sadly saw them take out this poor tenant. Such a shame. Hats off to the FDNY who had to manage this on a very cold and windy night.

This is awful. Condolences to the woman's friends and family, and I hope the neighbors are ok.

I live around the corner, but was unaware of the fire until morning. I seem to recall another fire in this location (not sure if it was the same building) about ten years ago. At the time, another elderly resident was injured and I was never able to find out if everyone was ok.

Don't know the cause of this fire. But the old tenement buildings around here are full of fire hazards and need to be outfitted with sprinkler systems. The electrical wiring in so many of these buildings is ancient and the demands are crazy with some apartments having multiple air conditioners and washers and dryers now.

Yeah, those little metal-framed barricades would wreak havoc on a fire truck.

Dang that is my block and I know that building well. Did not hear a thing last night though...

Re the commenter at 9:16 AM: I seem to recall another fire in this location (not sure if it was the same building) about ten years ago. At the time, another elderly resident was injured and I was never able to find out if everyone was ok.

It was the same building & the same woman.

I watched this live streamed on citizen app last night. First thing said was.... again?
So def happened before vut wow didn't know same apt and same lady. RIP.
Also HUGE shout out to ladder 9 who I think was the one who first responded. They had this thing out quickly right when it got heavy

Yikes ABC 7 says possible electric from air conditioning. Woman was hoarder and cat is unaccounted for. She was found unconscious and badly burned
https://abc7ny.com/amp/east-village-fatal-fire-80-year-old-woman-killed-in-deadly-manhattan/10390540/

This was the second time this woman was responsible for a fire in her apartment. She was hoarder. The first time it was an electrical fire. The neighbor underneath her was displaced from her apartment for months due to water damage. The landlord did nothing to remedy the hoarding situation of this tenant. This second fire was caused by a candle. The unfortunate downstairs tenant (and her cat) are now facing another displacement and is once again having to find another place to live for months where she can be with her pet.
BTW the fire trucks had no trouble getting into the block.

I remember the last fire in this building and thinking how lucky they were it wasn’t worse, Sadly, this time it was deadly. Condolences to all concerned, especially the neighbors who have water and smoke damage.

Hoarding is a serious mental health issue. It’s easy to blame the person responsible, but its a very difficult behavior to change. I have two neighbors have been mother-daughter hoarders for decades. The mother passed away last year and everyone thought the daughter would surely clean out the apartment, but it is still so full of boxes and junk she can barely open the front door. It is so bad that maintenance refuses to enter the apartment unless it’s an emergency.

For years we thought the mother was the hoarder, but there is obviously a hoarding pathology in the family. It’s a wealthy family, so money is not the problem. In fact they have used their wealth over the years to fight off management which wants them to fix the problem. We have been worried that a fire could break out in her apartment for years, or that they would eventually get trapped an killed under the stacks of boxes of junk that fill the apartment. I guess there is no easy solution.

I used to lived next door to an old Italian lady on West 3rd. She had so much junk it was unreal. Never had a fire but it was like the palace of Versailles for cockroaches. They loved the place. One day she had a big freakout and started throwing all her infested clothing and junk into the hall. I had a French girl who was my roommate at the time but thought it was cruel to kill the roaches so they just went on their merry way. Eventually the old lady's son came by to help sort things out. Landlord never did shit.