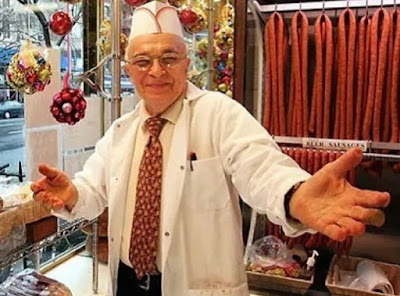 Julian Baczynsky, who opened the East Village Meat Market in 1970 at 139 Second Ave. between St. Mark's Place and Ninth Street, died on Wednesday. He was 98.
The shop's Instagram account posted this tribute:

It is with great sadness that we write to inform you of the passing of our beloved founder/owner, Julian Baczynsky. His work and dedication to the Ukrainian community and the East Village will always be remembered.

According to Village Preservation, Baczynsky emigrated here from Ukraine in 1949.

In 1955 he opened his first store on Avenue B and 10th Street, and later he and a partner opened a store on First Avenue. In 1970 he and his partner parted ways and he started his own store at 139 Second Avenue with the goal to have a store that would preserve Eastern European culture.

Per the East Village Meat Market website: "It was his life-long dream to own a business and have a slice of the American Dream."
We asked Tom Birchard, the longtime owner of Veselka on Second Avenue at Ninth Street, for his thoughts about the passing of his friend and neighbor.

Mr. Baczynsky opened his shop on Second Avenue shortly after I came to Veselka in 1966 and we’ve been friends and neighbors ever since. He has supplied us with his excellent home-smoked kielbasa for over 50 years. We have at times struggled to survive and at times flourished together. We couldn't have asked for a better neighbor and collaborator. We are very thankful for his long and very productive life. He will be sorely missed.

Although Baczynsky lived outside the city of late, he was a resident of this neighborhood for many years. The shop will continue under the leadership of manager Andrew Ilnicki.
Image via @eastvillagemeatmarket
Posted by Grieve at 6:00 AM

So sad to hear this

This is such sad news. I don't know a single person who has been to the deli who doesn't love it; never a lukewarm "it's OK," always superlative enthusiasm. What a legacy and contribution to our neighborhood.

RIP, Mr. Baczynsky; you will live on in the memories of everyone who patronizes your wonderful, and sadly. now only, Ukrainian store with its wonderful products. We are grateful that EVMM survived this past year, and will hopefully go forward and flourish for many more years.

R.I.P Sir Sad news indeed - Love the shop was there a lot 30 years back when i was eating animals and still go in for the egg noodles!

They make a d@mn good kobasa!

Legend RIP - Grateful they make the best kobasy in NY, all smoked in house and so affordable.

God speed, good sir. You did your community and your neighborhood proud.
Blessings.

In 1970 when Bazcynsky e.village meat mkt opened, Jim Morrison probably would have loved sampling some of Julian's smoked Ukrainian Kielbasy on Rye with some great tasting Ukrainian Vodka to help wash it down! eh Patricia?

98 is a nice age to reach.
I remember him. He was a nice man.
I hope he gets a nice place, in the here after.

This is very sad news... he was a lovely man... he always gave me a piece of Kabanosy as a kid when I came in to the shop.

Small correction, made with friendly intent. "The boss" as his staff at the market called him, never left the city. He died at home, in his apartment on Saint Marks place, where he lived without interruption since 1960.

Mr Baczynsky left a beautiful legacy to the East Village. May it live on in his memory.