Concern for the barking dogs at 58 St. Mark's Place 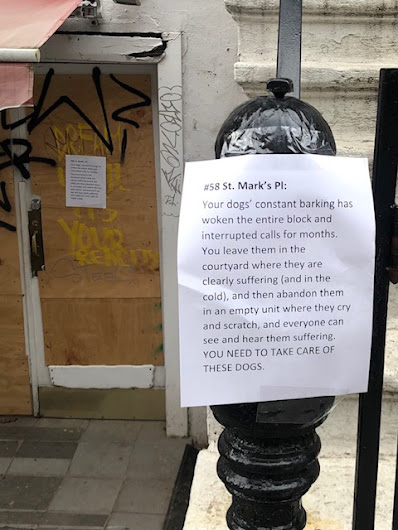 Back in October, an EVG reader wrote in about a seemingly unattended dog (or dogs) coming from somewhere in the shared courtyard toward the west side of the block between Seventh Street and St. Mark's Place ... and First Avenue and Second Avenue.
Since then, thanks to some sleuthing, the reader has tracked down the location ... but is stymied by the lack of progress to free the dogs.

I posted on Next Door, where I was able to find a man across the courtyard who had already posted about the dogs, and could identify the building and posted a video of the dogs barking and scratching at the back entrance, as well as someone who had seen the dogs moved into the same building at the time when the barking started.

Unfortunately, what we learned is that the dogs are being kept in the abandoned unit that formerly was home to Clay Pot at 58 St. Mark's Place. It's empty. So every time I report it to 311, they send a police officer who knocks on the door, no one answers, and they shut the animal neglect ticket.
The Office of Health and Mental Hygiene isn't answering their phones or returning messages. The barking is near-constant day and night, and obviously very distressed and suffering. I have been posting flyers outside the door, which get ripped off, and I found a ConEd notice this week saying that there was no tenant in the unit but it was still receiving gas, which would be shut off.
I (and the others on NextDoor) am now worried that if it gets cold again, or if electricity is cut off, those dogs will freeze to death, or die of sheer neglect in the dark.
Is there anything else EV Grieve readers can think of? I have tried 311 and the 92nd St ASPCA (both of which send the complaint to the local NYPD precinct, which knocks and leaves), flyers, Next Door. I'm at wit's end and feel as though I am just waiting for the dogs to die tragically.

58 St. Mark's Place between First Avenue and Second is one of the many East Village buildings scooped up by now-disgraced landlord Raphael (Rafi) Toledano. The building appears to still be in his name, per public records.
In 2017, a subsidiary of lender Madison Realty Capital took over the portfolio while Toledano was mired in bankruptcy proceedings. It's not immediately clear who is managing the building today... or who is keeping the dogs behind an empty restaurant space.
Posted by Grieve at 11:30 AM

This both a terrible situation for the neighbors and these neglected animals. I hope the person(s) Please don't give up on this and hopefully the person responsible is fined and those dogs are removed from their possession.

I don't know if you would get a different approach but you could try crime stoppers:
1-800-577-TIPS or online at www.nypdcrimestoppers.nyc.gov.

or NY1? sometimes they will take on a story and get results.

Is there a super? Perhaps they will open the apartment to surrender the dogs to you/ a rescue.

This situation is all over the Next Door app right now too. Seems like the entire block hears the poor pups.

Have you called Carlina Rivera's office? They helped the Tompkins Square Bagels guy get their gas service back. Maybe they can help with this situation.

Agree that contacting Council woman Carlina Rivera's office at district2@council.nyc.gov is a good idea. They are extremely responsive ! Also, try Community Board No. 3 at mn03@cb.nyc.gov.

Very thankful for the responsible person trying to get an intervention for these dogs. Shame, shame on the person who is neglecting them. Please update on this story, if possible. And thanks for all of our organized neighbors with ideas on how to save/rehome them.

How about just breaking in ?

If the above tips don't help, consider reaching out to these folks: https://www.nybullycrew.org/

Please don't break the law no matter what.

Interesting that you could reach out to Councilwoman Rivera’s office for this but she’s MIA and downright combative on East River Park.

Clay Pot? They have a west village location, perhaps they can help? Not say they are responsible for the dogs. But who feeds the dogs? This is not cool. Barking dogs is one thing, neglected dogs is another issue.

I live in this block , farther east toward Abraço , my unit faves the back. And even I can hear these dogs barking extremely loudly at certain times of day. Sounds like the dog is in extreme distress.

Not to change the subject completely ... but I have another noise complaint: frequent loud music playing out of the back of Jewish Board Kaplan House. I call them and 311 to complain and sometimes it gets addressed, sometimes it does not. Could be at 10am or 2am. This noise is also so disruptive to me... does anyone else hear Kaplan House loud music?

Our block had a bunch of noise issues I guess.

Rivera really is combative on East River Park. Its the wrong vote and if there was any real public discourse their ECOCIDE would be called out - this will be a generational project, it will take a decade to complete. It is not encircled by celebrities and billionaires like Central Park. The trees seemed to weather Sandy quite ok.

Admittedly I know next to nothing about this project, yet it does seem quite counter-intuitive to REMOVE trees in order to protect us against flooding. What am I missing?

Round up a group of two dozen neighbors and confront the person who comes or goes from the apartment in person. Bring along an officer from the 9th Precinct with you to make it proper and legal. Have a member of the ASPCA with you or perhaps a local news channel. Take possession of the dogs and give them a new home.

ASPCA is highly recommended for this

Can anyone get over the wall or fence into the yard where the dogs are and safely REMOVE them? If there's access from any adjacent building, I'd think you'd be in the clear, esp. if someone from ASPCA or NYC Animal Care & Control were there as well.

Whoever is allowing this to go on does NOT care for the dogs in the least, and if the dogs can be safely rescued, I say then let this "person" go explain his/her behavior to the NYC authorities. Whoever is doing this should not ever get possession of these animals back; that's just common sense.