After 29 years playing in the East Village, I finally decided to see 'Stomp' before it closed 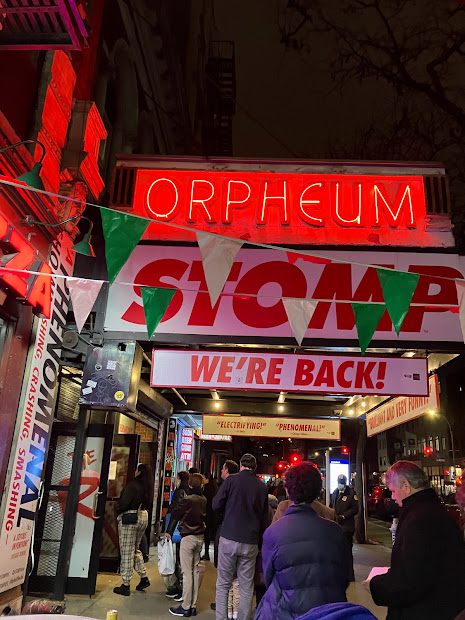 The 29-year reign of "Stomp" concluded yesterday evening at the Orpheum Theatre on Second Avenue.
Per NPR on Saturday:

"Twenty-nine years is a long time to sustain a run," "Stomp" co-producer and general manager Richard Frankel said. "Foreign tourists became a major part of our audience and they really have not returned to New York since COVID. It's been tough. We just aren't selling enough tickets."

The energetic percussion-based show opened here on Feb. 27, 1994, for an initial four-month run. Since then, I've walked by the theater between Seventh Street and St. Mark's Place thousands of times and never had any interest in seeing the production.
I'm not the biggest theater person, spending more time taking in live music, movies or art exhibits. Aside from seeing the marquee on a near-daily basis, "Stomp" didn't immediately register with me. At some point, I realized that "Stomp" had been playing here forever. I think it was 1997.
As the production continued to catch on and become a tourist destination, the desire to never see it only intensified.
I recall sitting with friends at the Grassroots on St. Mark's Place. Someone knew a cast member and went to see the show. Their reaction: "It was better than I expected." I heard that similar refrain from other people who had dreaded seeing it, mostly locals who brought relatives or other out-of-towners to the theater per their wishes.
Unlike "Rent," which had local roots, "Stomp" came out of the 1980s United Kingdom street performance scene. I never saw a connection between the show and the neighborhood, other than where the venue was located. Still, Frankel, the producer, told NPR that "Stomp" "really captured the sensibility of the East Village in the 1990s."
In any event, as it was ending after nearly 11,500 shows, I decided to buy a ticket for an evening performance last week... and found myself in a short line like I had passed so many times in the past 29 years. 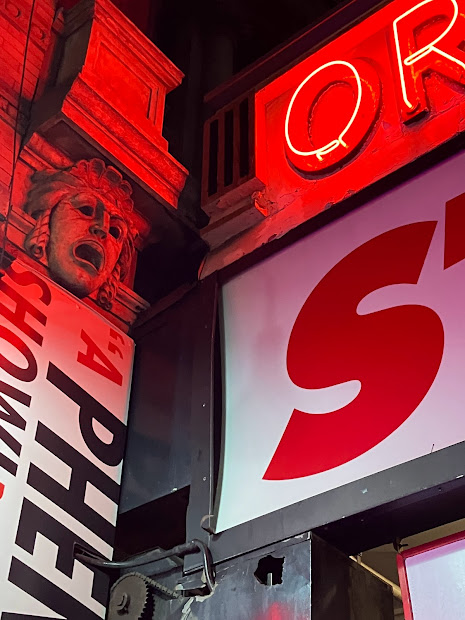 I admit to being curious about what the interior looked like... (there's a strict no-photo policy in the auditorium) ... 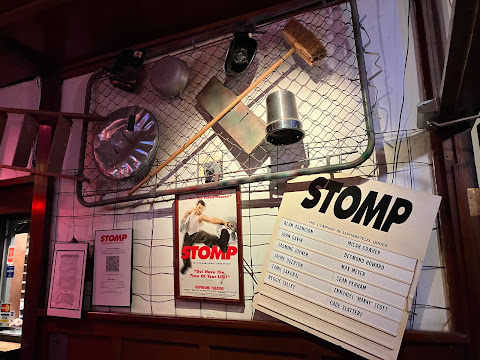 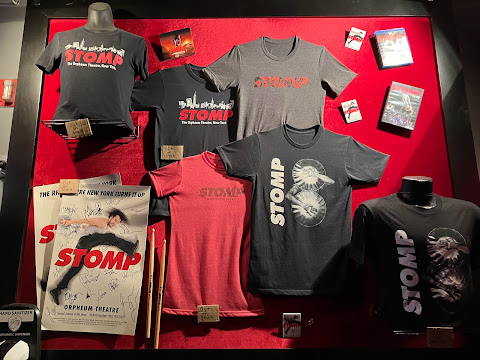 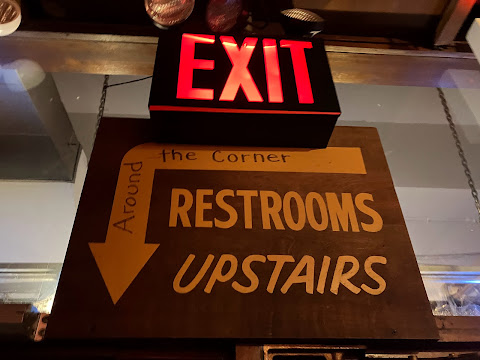 Here's an official description of the plot via a press release about the closing:

It is a journey through sound, a celebration of the every day and a comic interplay of characters wordlessly communicating through dance and drum. Synchronized stiff-bristle brooms become a sweeping orchestra, eight Zippo lighters flip open and closed to create a fiery fugue; wooden poles thump and clack in a rhythmic explosion. "Stomp" uses everything but conventional percussion instruments — dustbins, shopping carts, radiator hoses, boots, hub caps — to fill the stage with a compelling and unique act that is often imitated but never duplicated.

On the night of the show, I found myself sitting next to, and in front of, several parents and their children — roughly 7 to 12 in age. The kids patiently waited for the show to begin (the 8 p.m. start was actually 8:15 p.m.) by playing games or watching videos on various handheld devices. 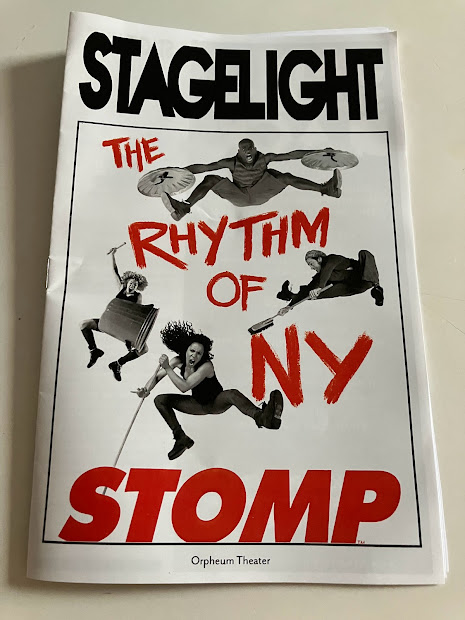 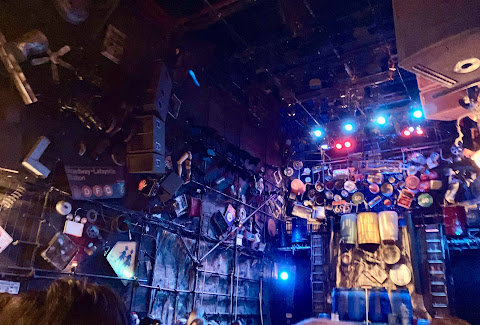 The show started, and the attendees — a sold-out theater of 300-plus — seemed to appreciate the talented performers and theatrics, laughing and clapping along during the audience-participation moments. The kids around me especially enjoyed the more sophomoric elements of the show (the radiator hose/penis gag). Set pieces came and went, and we all saw countless inventive ways to make rhythms from everyday household items.
I was pleased we had breezed through the show, as the early 20th-century seats without much legroom were taking their toll on my legs and lower back. At one point, I figured I had about 15 minutes left of the 105-minute show (with no intermission). I glanced at my phone; I had been there for 35 minutes — 70 to go!
With the continued banging of trash can lids and swishing of brooms, I wondered who the characters were supposed to be: Co-workers not really working? (A thunderous display of quiet quitting?) Roommates in an industrial space? (I would hate to live below them with all this racket!)
In the end, I'm glad I saw it. I appreciated the creativity or, as Village Preservation put it, "the joyful John Cage-ian insight that any object can be an instrument and any noise can be a song."
And there weren't any "why didn't I see this 26-27-28-29 years ago!" pangs of regret.
The show has won several awards, including the Olivier for best choreography, an OBIE and a Drama Desk award. Its North American and European tours will continue. (It has played in 45 countries.) So this isn't the end of "Stomp."
As for the future of the theater, I hope it remains an off-Broadway destination. In the 1980s, the Orpheum was well-known for Off-Broadway productions such as "Little Shop of Horrors" in 1982, Sandra Bernhard's "Without You I'm Nothing" in 1988, Eric Bogosian's "Sex, Drugs, Rock & Roll" in 1990, John Leguizamo's "Mambo Mouth" in 1991, and David Mamet's "Oleanna" in 1992.
No word on what might be next for the Orpheum, reportedly owned by Liberty Theatres, a subsidiary of Reading International, which also owns Minetta Lane Theatre. Some people have worried that this prime space will become the Orpheum Condoplex or something. That would be a familiar East Village story for the 2020s. 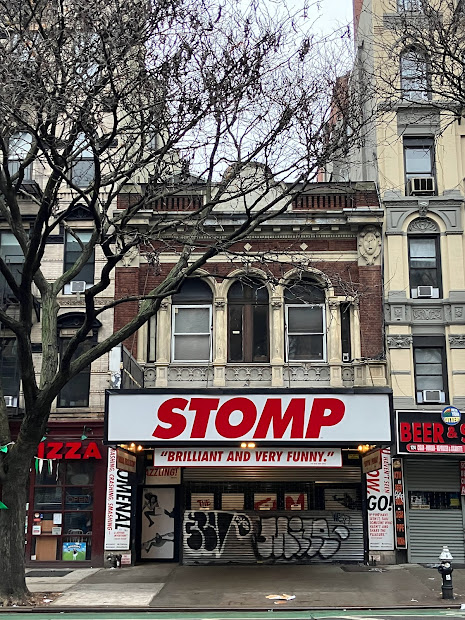 Fascinating! Thank you so much for reviewing it for those of us who have now officially missed our chance! Feeling a bit wistful, but you helped me feel like I was there after all.

Maybe they'll bring some real theater over there now.

Stomp has been a part of the east village just like the Rocky Horror Picture Show. Both will be missed.

I saw "Bloolips" there in the early 80s (and many other places in the EV).

I do regret that I never saw it here. But I guess like a lot of things that are right under your nose, you kind of ignore them because they're 'right there.'

Thanks for the review!

I have lived around the corner for about 25 years and feel kind of bad for never seeing the show. You described my feelings perfectly when you said as more tourists went to see it, my desire decreased. There is no rational reason behind this, of course. I've never known anyone who has actually seen the show, but various reviews were always good. I really hope the theater will be able to host a variety of things now.

As a long-time NYEr, one has seen it all.
I saw this maybe in 1999. My impression was just this is just a longer and stage version of the "it's showtime, it's showtime" shows that street performers perform in the subways or parks for the tourists. Also, my impression was this aimed for tourists or folks that do not know what an off-Broadway show is or should be and do not care to find out. I also found, at least in 1999, the performers were smug and arrogant. I've seen better of those "it's showtime, it's showtime" shows, but to each his/her own.

I think it is nice that it brought tourists to one of the great places on planet Earth, the East Village, with a traipse across St Marks Place.

The East Village sensibility is making something from abandonment, and doing it with an attitude.

Sharp, understated, and clear-eyed review! And those are some illustrious prior engagements. I hope there's some organizing to keep it a theater--is the building landmarked?

I always wanted to see it but the theater is not wheelchair accessible. Let's hope if the theater remains unmolested and does get a new show in there, the theater owner will upgrade and figure out a way to welcome disabled patrons.

Never saw Stomp or The Fantasticks, in spite of having passed both sides so many times. Thanks for taking the plunge and reporting back.

HAVE YOU SEEN BLUE MAN GROUP? Nearby & still alive... Also, I think a major cable tv co. made a great STOMP show, which is why I didn't go (either). Took tourists to BMG instead...

Great review! As someone who went once at the behest of out-of-town guests with children, I agree with your assessment across the board. I was glad I went, I wasn't kicking myself for not going sooner, and I thought the show was halfway over when we were only about 20 mins into it. Oof!

My friends saw Chuck Berry at this theater. It was late 1960’s or early 1970’s. I was too young. I didn’t see Chuck Berry until 1975 at MSG headlining the Rock n Roll Spectacular show.

I actually saw this show in Tokyo and it was a great reminder of home. See it with a friend who's into drumming or percussion instruments and it's a great time. Also, of course, it's good for kids

I don't mean to sound jaded but after one has seen Stiv Bators (Dead Boys)or the Plasmatics or the Cramps or Iggy Pop or guys banging on cans in TSP this, Stomp, seems a bit bougie; kind of like an EV version of a Las Vegas act in an almost but not quite slummy setting. As far as bringing tourists to the EV that's a bit disingenuous because once a club/ venue gets a reputation in NYC that's all that is needed to draw a crowd from the hinterland as well as our Eurotrash friends. Having said that, to each his own. Hopefully a small cool old place like could in the future be used for a variety of performing arts musical and theatrical alike, a mini Fillmore with high tech sound and lighting.

The STOMP is dead. Long live the Orpheum!

Sad to think of all the opportunities taken away from future Sandra Bernhards and John Leguizamos (saw them both at the Orpheum)and their potential audiences, because of Stomp's long residence.

Great post, in a Marty Wombacher sort of way.

I lived in the building directly next door over 20 years ago. I remember occasionally hearing the drumming through my drunken, heroin hazes.

You managed to elicit some FOMO in me, though I had my chance. I remember it getting a fair amount of coverage on the nightly news when it opened. I like rhythm and dance so I migt have liked it. Definitely could use one of those discarded plungers.

STOMP grew out of the Yes/No People, a band and performance art group from the UK that opened for Madness back in the day. They were also on Bette Midler's "Mondo Beyondo" TV special (which also featured David Cale, The Kipper Kids and other downtown performers).
https://www.youtube.com/watch?v=Z-2zAY2KaVc

Never saw Stomp or The Fantasticks, in spite of having passed both sides so many times. Thanks for taking the plunge and reporting back.

Shortly after 9/11 happened, I saw The Fantasticks for the first of several times, including when it went to Broadway.

I didn't know what STOMP was about—thought it was a show about urban dancing—or I might have been intrigued enough to go. Alas, another missed opportunity.