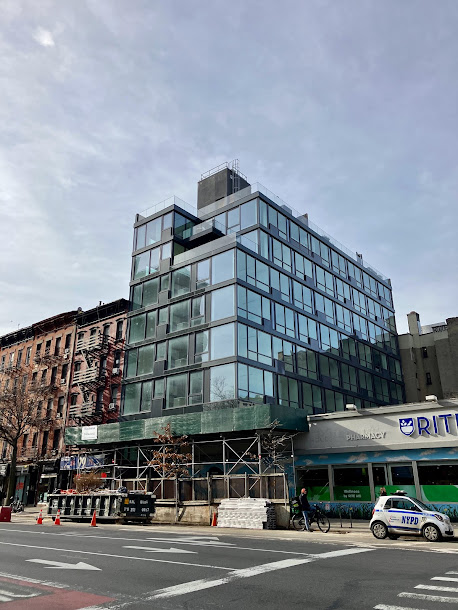 Over the weekend, workers dismantled the construction storage pen that had been sitting in the bike lane outside 75 First Ave. between Fourth Street and Fifth Street ... putting the contents into a dumpster... (thanks Elissa for the tip!) 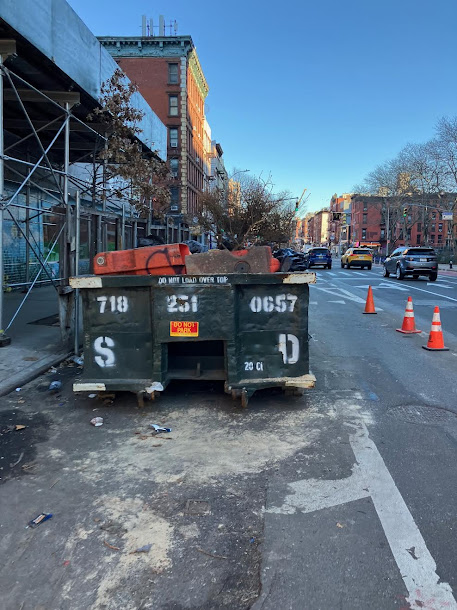 Once again, it appear that work might be complete here at the 8-floor condoplex that has been a long time in the making.
As previously noted, the groundbreaking here took place in September 2016. (The build included nearly 14 months of inactivity.) Sales commenced in August 2017, with City Realty reporting that 50% of the units sold in the first six weeks.
The venture was slowed down following a series of lawsuits between the construction manager, Pizzarotti, and the developer, the Colonnade Group, as The Real Deal reported in 2019.
The address even made our 2020 development watch... still on the list three years later.
Posted by Grieve at 5:02 AM

The crews had been redoing the window seals and the glass balcony railings on this building, it appears that that work is done. Interior cleanup in the apartments was happening last week, furniture arrangement, etc. So it does appear they are ready to now go to market finally.

On Friday there was a hilarious scene as a truck with a dumpster showed up, turned perpendicular to 1 Ave, and proceeded to move the existing dumpster closer to the curb by ramming it in reverse. Over and over until it scraped closer to the curb. As all the traffic honked and tried to squeeze by.

I certainly hope so. What an eyesore this is. It makes you wonder if anyone will ever live there. I wouldn't until the shed and the other shit in front of this building is gone. Otherwise why spend the money?

Every time I think this eyesore is done, the construction starts up again. I'm really glad all that junk in the street is finally gone. After having to re-do a lot of the work, I have to wonder if this building is really safe.

They just removed the dumpster! I dunno if I'd really want to ride over whatever has been collecting under there all these years 😬
All that remains in the bike lane is a pile of construction materials... and a car parked just south of the crosswalk. Progress!

Who would spend millions on an apartment in that neighborhood with those views?

They should pull up another dumpster and put the entire building in it. At that point the renovation is done.

I live in the building behind this one, along 4th street. Massive windows in the back that look out onto…the backs of old school nyc walk ups. Why anyone is going to pay ridiculous amounts of rent for that is beyond me. I hope they put up blinds so I don’t have to look into their apartments from my yard as I barbecue back here all summer…hope they don’t mind their apartments smelling like smoked pulled pork either