On Sunday night, Diablo Royale Este — home of the Hopsicle! — at 169 Avenue A was host to a party that attracted what one resident described as "swarms" of young adults. 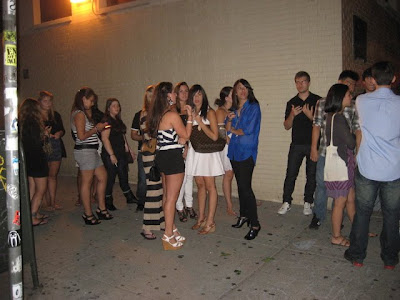 By Monday morning, the EV Grieve inbox was filled with e-mails about the bash. Such as this one from a reader:

You may be hearing from other people about this already, but there are swarms of what appear to be college students trolling East 12th Street between A and B. From what I can hear, it sounds like they are all trying to find some party. They're ranging in age from late teens to early 20s, and they are loud and obnoxious. ... it is so depressing. Just heard a big, "WHOOOOO!" I never thought the East Village would become one big frat/sorority party. I moved here to get away from those people!

Am I the only one in town and experiencing over 500 18-20 year olds who have literally taken over the sidewalks and three-block radius, as I write?? I came home at 11 and Diablo Royal is having some event that has packed the sidewalks and streets with young people screaming and breaking bottles. There is one cop car parked outside and no cops to be seen. It's INSANE HERE. 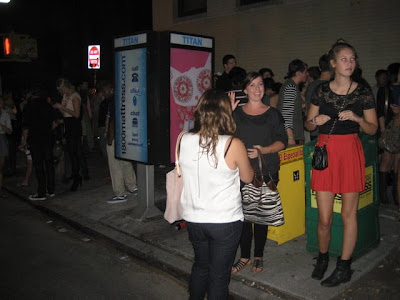 I called 911 to complain and the operator said "It's Labor Day." Then I went and found one cop who said "it's nearly over," but I have no idea what it is. Jason Bieber??? I've NEVER seen this many people in one place since attending Obama's inauguration in DC.

And you can see what the readers were talking about in the photos in this post....the line for Diablo Royale stretched south on Avenue A and wrapped around the corner on East 10th Street... 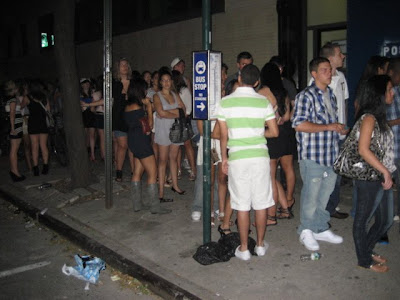 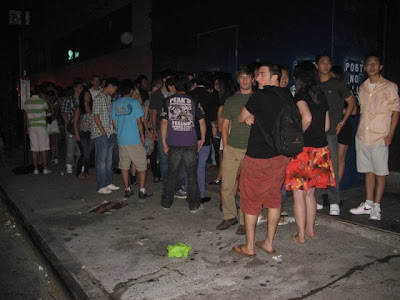 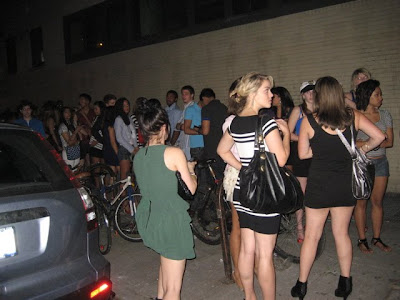 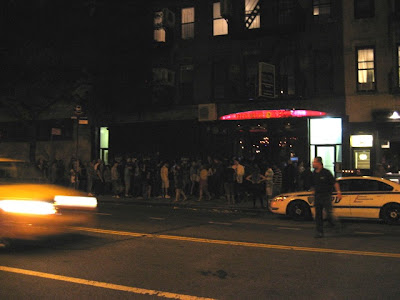 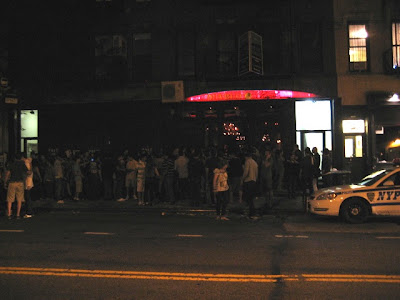 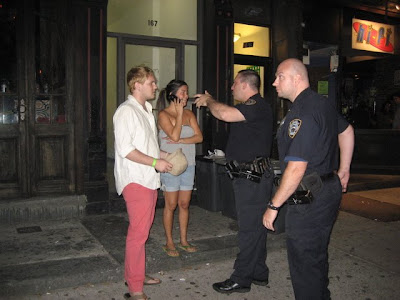 Meanwhile, some neighbors who were were already upset with Diablo Royale Este since their Cinco de Mayo opening, are now fuming. Said one longtime resident:

"Our worst fears are being realized as Diablo is catering to and becoming a destination for young party folk."

The first review of Diablo Royale Este is in!
Posted by Grieve at 7:00 AM

Someone's WORST FEAR is Diablo Royale catering to and becoming a destination for young party folk?

Yes Dan, because we LIVE HERE

Look of the photos. This is a residential neighborhood, not mardi gras, and if you want to cater to throngs of "young party folk" you'd better know how to control it.

What kind of woman goes to a party where she'll be called a ho? And wtf do boats have to do with a landlocked Mexican restaurant on Avenue A? So much privilege, so much stupidity.

Congratulations, Superdive, you're no longer the most loathsome bar on the upper ave.

A far cry from my days attending save the robots. I wonder if brownies ever yielded crowds like this :) 10 years ago lines like this would form at 3:00AM in front of the cock. Who would have ever thought that a bunch of people dressed in drag soliciting sex would be much more controlled than a bunch fashion-yuppie-retards.

I move out of my building on Ave A of a decade when superdive came in. Bad news; I'm still living in the East Village. I working on correcting this soon. Another sports bar opened on my block, which
makes seven in less than a 5 step walk.

Please someone teleport me back to 1994 EV.

teleport me back to strange? records, sonic records, adult crash, the kiev, the jamaican hair place where i used to buy pot on ave a and 7th street, and antique boutique.

Thanks for the explanation. I was wondering about this Sunday night as I was headed home from International Bar.

These kids looked really young. They must have promoted it to the NYU welcome week crowd. It's definitely the biggest crowd I remember just randomly standing on various corners' sidewalks.

I called 911 to complain and the operator said "It's Labor Day." Then I went and found one cop who said "it's nearly over," but I have no idea what it is.

Also, why the fuck is someone calling 911 about this? I hope they meant 311 not 911. It's true that the cops should have broken it up earlier and dispersed all these kids as it is a residential neighborhood, but don't call 911 on this shit.

"Our worst fears are being realized as Diablo is catering to and becoming a destination for young party folk."

That quote was pretty funny too. A bar catering to young party folk? What a goddamn shock.

these are NYU students. Hipsters don't wear shorts. Even in 100-degree and humid weather they wear the dirty tight jeans.

I bet the Fishmonger wouldn't have promoted events like this. Too bad this is the place that was approved. I assume they got the CB seal of approval, at least. Is that right?

This is just beyond the pale. Really, who would have ever thought a place would come along that made The Cock look good?

17. East Village Café & Restaurant, 167 Ave A (alt/op)
VOTE: To deny the alteration application for East Village Café & Restaurant, 167 Avenue A, to wit creating a seating plan for dining on the ground floor and in the basement, installing a kitchen, installing doors which could be opened on the rear of the establishment and moving the existing front door to the northernmost point of the Avenue A façade, unless the applicant agrees before the SLA to incorporate as conditions of its license the following signed and notarized stipulation that 1) it will have operating hours of 11:30 am to 2:00 am Sundays through Wednesdays and 11:30 am to 2:30 am Thursdays through Saturdays, 2) it will close the backyard no later than 10:00 pm weeknights and 11:00 pm weekends, 3) it will close all front and rear façade doors and windows at 10:00 pm every night, 4) it will install awnings over any façade and said awnings will be extended while facades are open, 5) it will operate as a full-service Mexican restaurant, serving food to within one (1) hour of closing, 6) if there are any complaints of noise emanating from the back of the establishment, the applicant will return to this committee to revisit the opening of the rear façade, and 7) it will have live music no more than five (5) times per year which will consist of musicians playing Mexican music.

I had a similar party situation at my building about a year ago and called 311 to complain. The crowds were coming into the building, up the stairs, screaming, breaking bottles, etc, so the 311 operator told me to call 911 and report it as "breaking and entering in progress." I did and left my name and other info. No cops ever responded even though the precinct is a stone's throw away and it was a 911 call. I get the distinct feeling that the police see an address, recognize it as a "party" location and ignore it.

Mexican?? Well that contravenes the terms of the agreement right there, so it should be brought back up before CB 3. I think I will write a letter, but if anyone else wants to as well so it goes on the agenda:

The mroe the better.

I'd rather go next door to Hi Fi any day. That place looks like a Transylvanian whorehouse from the outside... I can only imagine how dark, depressing & loud it is inside.

"But CB3, you didn't say anything about crowds of underage kids in front of the bar."

As far the 311/911 stuff goes, I get the feeling that calling 311 is good for getting a complaint logged officially, for future reference when the establishment is back before the CB. But not particularly effective for getting a situation like this dealt with while it is happening. I once called 311 about a car alarm that was going off outside my window on and off (a lot) for the better part of a day. I was told the response time for that was on the order of seven *days*.

I have also called precincts at various times to get help with noise and other issues that don't rise to the level of an emergency, but nonetheless can only be dealt with by the police. The response time has been highly variable, and generally slow. And I feel much slower today than it was a few years ago, given cutbacks. Also, if you're calling a precinct in the East Village on a weekend night about noise, I don't believe they will attend to the issue quickly if at all. There's worse things going on in the neighborhood that need to be dealt with first.

I think I have this straight now. If you're a grumpy, bitter old-timer who feels left behind, then you bore everyone within earshot about the grungy good old days when shit was like REAL, man.

But kids today having a pretty ordinary party are evil and should get the hell off your lawn. Right after they've subsidized your welfare lifestyle with some transfer payments, of course.

deputize the crusties and turn them loose on these nyu pukes!

Way I see it, the adults who actually build up a neighborhood, community, and a city are the ones subsidizing the childish behavior of these young dilettantes as they treat our home and neighborhood like a damn theme park.

I don't think that NYU students, mired in student debt or daddy's money, are going to be subsidizing our lifestyle in any form. Indeed, I find the reference to welfare ironic given that the vast majority of NYU students couldn't remotely afford to ruin^Wpopulate our neighborhoods without a great deal of financial assistance.