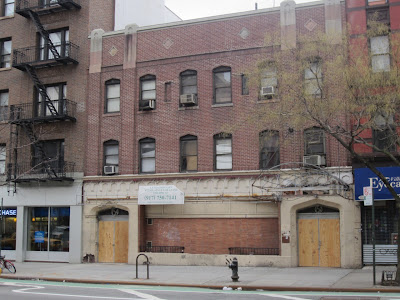 As Off the Grid first reported last summer, there are plans on file to "Remodel the existing three story building and add 3 stories on top."

According to the DOB, city officials have approved those plans on Jan. 10. Here's the DOB language:

REMODEL EXISTING THREE STORY BUILDING AND ADD 3 STORIES ON TOP OF EXISTING BUILDING. SECOND AND THIRD FLOORS TO BE CONVERTED TO RESIDENTIAL ONLY. FIRST FLOOR TO BE USED AS A COMMERCIAL USE.

The architect on this project is Ramy Issac, once dubbed by New York magazine as "The controversial penthouse king of the East Village." Developer Terrence Lowenberg of Icon Realty is behind the project. Icon is currently renovating 147 First Ave.

Check out this history of the Sigmund Schwartz Gramercy Park Chapel at Jeremiah's Vanishing New York.

Here's what the address looked like in the 1940s, via Vanishing New York... 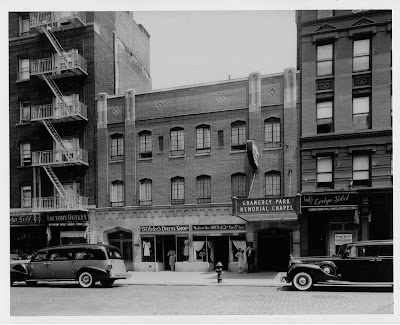 Will a gut renovation and three-floor addition be enough to wipe out the spirits of the funeral home?

Previously on EV Grieve:
Former funeral home looks to double in size with help from 'the controversial penthouse king of the East Village'
Posted by Grieve at 7:00 AM

Excellent! Even more unendurable construction for the neighbors! CITIZENS LAST!

Another case of 'tack an ugly glass box on top of a historic building and call it a luxury penthouse' game...so...lovely...

Hey, those cars are going the wrong way in the bike lane !!!!

"Gramercy" has been the old telephone exchange for this neighborhood for ages(>50 years). Our phone number was and still is 'Gramercy'5-**** or GR5-****. You can spot EV old timers by the "475-" of their phone number.

That breaks my heart. That is one sweet little building and putting something invariably ridiculous and glassy on top if it is an insult to the senses.

@Thowell: Ah yes, the telephone exchange. I never thought of that. Fascinating!

Actually, a man busted out one of the glass doors with a brick in order to sleep in there last week...this is why the doors are boarded up. BUT, I noticed that the same person (according to reports) has now busted the door open again and is now sleeping there with a female friend. So unfortunately, I don't think there is any actual work happening there anytime soon :(

it is not the dead we need worry about but the living..