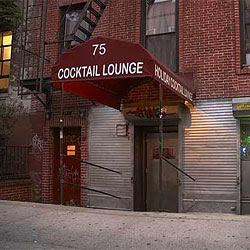 We feared the worst when 75 St. Mark's Place went on the market last fall. Aside from several apartments, the building is home to the beloved Holiday Cocktail Lounge, whose future seemed shaky ever since its owner, Stefan Lutak, died two years ago.

Meanwhile, the Holiday is on next month's CB3/SLA agenda under new license applications. Suspicious, given that they already have a license.

Well. Turns out the building in in contract... 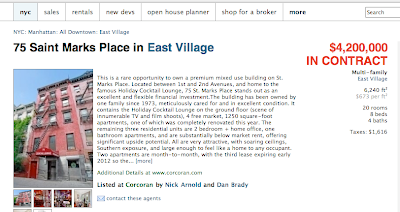 A well-place tipster notes that the Holiday as we know it will close after Saturday night. "Locks will be changed immediately."

We understand that another bar will take its place. What happens to the current appearance is unknown.

Per the tipster: "Another EV historical institution gone."

And now, a walk-off passage from an article by former East Village resident Mike Hudson in the Niagra Falls Reporter a few years back:

[L]ike many Manhattan dives the Holiday Lounge had its writers.

For years Allen Ginsberg had a large apartment in a building almost directly across the street, and he and other Beat writers like Jack Kerouac, William Burroughs, Gregory Corso and Herbert Huncke spent considerable time with the bookies, dope dealers, working girls and alcoholics for whom the Holiday was a second home. 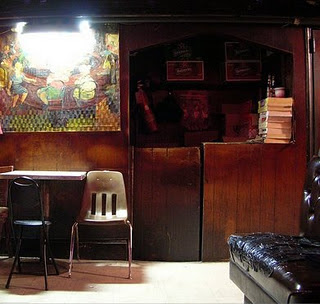 All of these recent bar closures are getting out of hand... Ugh.

For me, like so many of the old places in this neighborhood (and this town), it's been many years since I've been here. But it sure makes me sad to see it go.

As immortalized by NYC legends The Bouncing Souls:

Another bar is taking the place. I have no information yet about the new place, but these takeovers don't go so well ... (example: Fedora.)

$50 says it becomes a place serving only one specific kind of dessert.

And the dessert will cost $50!

my earlier despair is quickly evolving into rage. this is when i fantasize about bricks and baseball bats.

I think it's gonna be combination artisanal ramen noodle & gourmet hamburger joint with signature (liquid nitrogen) frozen cocktails made from Starbucks coffee which will then be partially melted with a hot poker.

Rev Bill needs to step in on this one. I got hammered with some folks from his Stop Shopping Choir @ holiday earlier this year. Damn though, another treasure gets mined and processed.

I hope it is a bar that is actually a luxury condo full of finance assholes and shitty coke chicks. And they can serve Molotov Cocktails. I love NY.

Well at least I'll know how to spend my winnings! Though the price goes up from there if you want artisanal homemade toppings.

No kidding, walking by the soon-to-be Starbucks on 1st Ave where the Bean used to be, it's all I can do to not try to drop those windows.

i'm sorry to disagree, but i'm almost positive the information about the sale of the building is true, but that the holiday won't be closing... still, i'll probably there for the next three nights (but really would have anyway)

The landlord is another one of the greedy bastard landlords that have destroyed NYC. May he or she rot in hell.

The Holiday is quite possibly the first "real" bar I ever went to, somewhere around 1978. We went because the drinks were $1 (and they didn't ask for id). I was in my best punk rock outfit and purple hair. The bartender left for what seemed like a long while, so we made the rash decision to bolt. We ran out on a bill of around $5. Why the bartender didn't collect our money when he gave us the drinks is beyond me, because we were obviously kids. I couldn't go back in there for years due to the humiliation.

One of my friends only remembers there being roaches on the bar but I contend she is mixing it up with Stromboli, which is the first place I ever saw a roach in a restaurant, and it may have been that same night.

Spent $100 a month here easy. Dear landlord, guess how much I'll spend at the new one?

aaaaaand there goes the neighborhood.

Amount I've spent in the Holiday in the 33 years I've lived in the neighborhood:

Amount I will spend in whatever establishment replaces it:

I don't know.
Even though I would not patronize a Subway/Starbucks/FroYo/7-11 I'm willing to judge a business on its merits and my personal likes and dislikes.

The Holiday hasn't been the same since Stefan died. In a way, it's good they're giving up the ghost.

Very sad indeed- thanks for the notice, and the memories...

This was a holy place for souls on fire.

Wow. That's sad news. Spent a lot of time there. We used to hang out at The Holiday in the early 80's. Such good times. Hard to say goodbye to all the great old places.