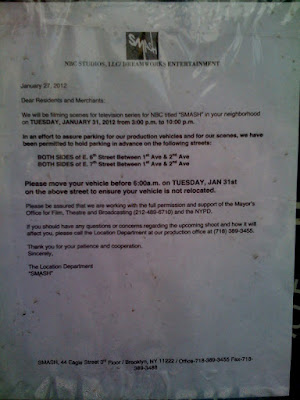 The incoming NBC series "Smash" is back filming in the neighborhood ... today, they'll be on East Sixth Street between First Avenue and Second Avenue...

As an exasperated resident of the block said, "Because living on East Sixth Street between First and Second Avenues isn't torture enough already." The resident points to "the insanely noisy construction of Maybe-Schwimmer's mansion" at 331 E. Sixth St. as the culprit. The resident noted that two cement-mixing trucks groaned away in front of the soon-to-be six-story home all day this past Friday.

So will the construction crew take a breather during the filming (Spielberg is involved! He has connections!)? Or, per the resident, did the location crew accidentally scout this location on a weekend or a rare quiet day, thereby failing to note the construction racket that is guaranteed to ruin any shoot?