So you know developers are turning the long-empty Mystery Lot off 14th/13th Streets near Third Avenue into condos... The Real Deal reported yesterday afternoon that the developers "hired Jacqueline Urgo, president of the Marketing Developers, to promote the property, which is slated for groundbreaking this summer."

Jackie! (Jac? JU?) have WE got some marketing ideas for you! Let's talk! [motions with pinky-thumb to ear as if holding a phone]. 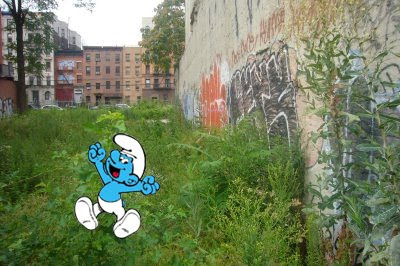 More on this later. Meanwhile, the future Mystery Lot address is officially 211 E. 13th St. And another tidbit from Real Deal:

The project will feature a mix of studios and one-, two- and three-bedroom apartments, plus 4,500 square feet of ground-floor retail space on East 14th Street. Amenities include a gym, lounge and roof deck with an outdoor kitchen. Buyers will have a chance to purchase private storage and roof terraces.

And on a clear day, you'll be able to smell bacon.
Posted by Grieve at 8:01 AM

Smurfs are back! It's spring!