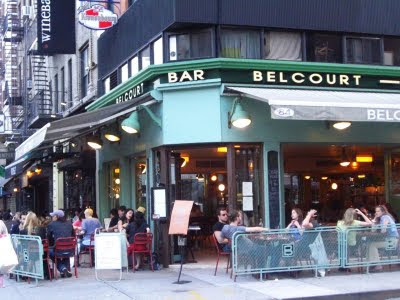 [Photo via Guest of a Guest]

On Jan. 3, we reported that some folks involved with Prune would be taking over Belcourt on Second Avenue at Fourth Street. The new place will be called Calliope.

This afternoon, Diner's Journal provided more details on what's happening with the new restaurant... Among other things, Eric Korsh, the executive chef at the Waverly Inn, the hyped, kinda exclusive West Village place that Graydon Carter owns or something, will be opening the space with his wife, Ginevra Iverson, Prune's one-time sous chef. (Korsh's name was not on the original CB3 documents. The CB3/SLA committee OK'd this transfer earlier this month.)

According to Diner's Journal, Calliope should open in April, with Belcourt bowing out in March.

Oh dear. Does this mean $55 plates of macaroni and cheese?

decent inexpensive food was what you used to expect around here

now everyone just feeds the landlord

this is really depressing

this did not seem to go through before

Ok, but didnt Belcourt suck though?

Good question. I never ate there.

I ate at Belcourt once or twice. It sucked a fat one. And was expensive at the same time, which even brainless yuppies won't deal with - this isn't LA. I must admit, morbid curiosity may take me into the new place simply because it's so nearby (Queen Vic got me that way too). Has anyone tried that tiny little Italian place down the block though? Has something like 4 tables...?

We ate at Belcourt once--don't remember the food or the prices because we were too busy being totally besotted with Mikhail Baryshnikov a few tables away (and he even came over to our table afterward to comment on the beauty of our child!). He was in a play across the street. Total swoon.