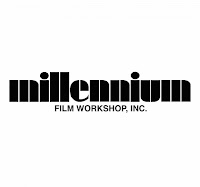 Steven Thrasher checked in late last night at Runnin' Scared with some troubling news: Millennium Film Workshop is being evicted from its longtime home on East Fourth Street after falling being on rent.

Board member Jay Hudson told Thrasher that the legendary film collective has had its funding drastically cut by the New York State Council for the Arts in recent times. However, you can't blame some heartless condo-eyeing developer for this eviction. According to Hudson, La Mama is the landlord.

The two were not always landlord and tenant. Hudson says that La Mama and Millenium moved into 74 and 66 East 4th Street, respectively, at the same time, with La Mama founder Ellen Stewart and longtime Millennium leader Howard Guttenplan at the helm of each organization. Originally owned by the city, Hudson says, in 2005, La Mama "paid a dollar" and became the owner of both buildings (and Millenium's landlord).

For a long time, Hudson says, "There was a standing relationship between Ellen and Howard. I think that kept La Mama from making a move on Millenium."

You can read the rest of the story here. And it's to be continued as La Mama has yet to give its side of the story.
Posted by Grieve at 6:42 AM

Millenium occupies the lower level of the building while La Mama has several floors of performance space above (including an illegal residence) as well as other buildings on that row -- how the fuck is it hurting La Mama to just let Millenium be?

Let's not forget La Mama's deal with real estate vermin Donald Capoccia that resulted in the destruction of 9-17 Second Avenue for creation of yet another super-sized yuppie ghetto complex that further enriches Capoccia and kills affordable housing. No one else benefits from this fucking fiasco!!(One can only wonder how much they were paid under the table to facilitate this.)

It seems that La Mama is in the real estate business. Hmmm....