'Another corporation' looking at Joe's 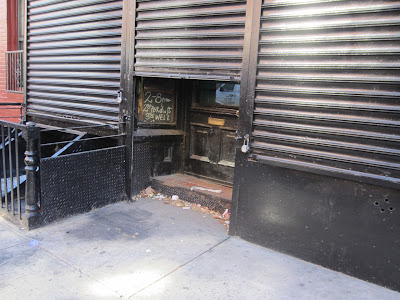 On Saturday, EV Grieve regular AC told us that the gate was open at Joe's, the neighborhood favorite that has been closed since Thanksgiving. AC talked with a man who had come out of the bar. The worker, who was holding a broom, said that Joe had died, and that "another corporation" was looking at the possibility of taking the bar over... Upon hearing this, we zipped over to East Sixth Street, though no one was still around... and the gate was mostly closed...

Owner Joe Vajda died this past Thanksgiving. The bar's status is still unknown. This is the first time that we can recall seeing any activity here in the past few months. Another tipster had noted via email that Identity across the street bought Joe's remaining tapped beer.

Previously.
Posted by Grieve at 6:43 AM

What are the odds that the "corporation's" working name is either, 7-Eleven or Subway?

There are so many untruths being written about Joe's Bar. He was a great man and had a big heart. Please do not tarnish this by writing things that may be untrue. Time will tell the truth and will be written.

Please explain! There is nothing weird with what was written. I write the truth!