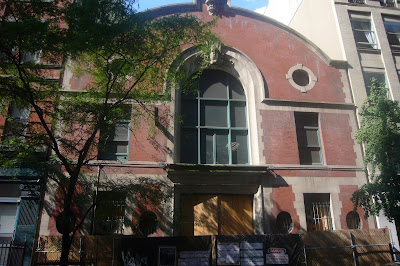 The long, complicated history of 128 E. 13th St. between Fourth Avenue and Third Avenue is about to get more complicated. This afternoon, The Real Deal reports that the circa-1903 carriage house that once belonged to famed sculptor Frank Stella is now up for auction.

This is believed to be the last surviving horse and carriage auction mart building in New York City, according to the Greenwich Village Society for Historic Preservation (GVSHP), who helped keep the structure from becoming a seven-level condo back in 2006.

The Peridance Center has a lease there now for a dance studio.

According to the Real Deal:

A state Supreme Court judge has ordered the sale of a historic East Village art studio and former horse auction house, after two new investors, Isaac Mishan and Joseph Sabbah of Ultimate Realty, failed to gain approvals for a proposed condo project and defaulted on $10.5 million in loans.

While preservationists thwarted the previous condo takeover attempt, the building was never landmarked, likely making it vulnerable again for a modern glass-and-steel death.

Previously.
Posted by Grieve at 1:40 PM

How the f*ck is this not landmarked?? SERIOUSLY??
Message from LPC: "Calling all developers, come pillage all of NYC's architectural treasures and destroy class and culture while you're at it! Screw the arts and progress of society, and bring in the chain$ and the yuppie$, woo-hoo."
I take dance class at peridance