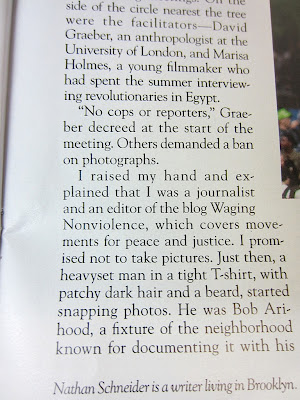 The February issue of Harper's includes an article titled "Some Assembly Required" by Brooklyn-based writer Nathan Schneider. The piece examines the rise of Occupy Wall Street.

And Bob Arihood makes a brief appearance early on in the article, where Schneider describes the scene last Aug. 13 during a General Assembly meeting in Tompkins Square Park. As you may recall, some of the attendees requested a ban on photographs... and how Bob explained "the nature of public space." 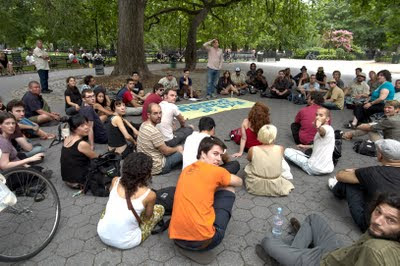 Bob wrote about the episode here at Neither More Nor Less. The post attracted many comments.

And the Harper's piece reminded me that Bob died just as Occupy was really just getting started.

The Harper's article is online, though you must be a subscriber to access it.

Thanks to Pluto for letting me know about the article.
Posted by Grieve at 6:50 AM

Great to read that post from Bob again. Thanks for posting this, nice to see the spirit of Bob living on.

Bob's photograph should be nominated for what ever Photo of the Year 2011 du jur that goes on this time of year.

He captured OWS before they even had a name - it became something so so big, Time Magazine named "The Protestor" Person of the Year.

And Bob captured these people first. Just look at that photo. It's beyond belief.

Bob should get his damn due.

This OWS photo that Bob took, I thought was priceless http://3.bp.blogspot.com/-FlA6JDFsu-M/TnbMNcDeSHI/AAAAAAAAM1s/nWJlVTfwpLI/s1600/L9996873.jpg
Showing the way the city has been been completely whored out for the tourist dollar, and their experience being protected by beefy cops.
I live 5 doors down from Bob's old building. I still look left when I walk out the door to see if he's coming up the block.