There has been a lot of discussion about the 7-Eleven being carved out of the former Bar on A and Angels & Kings on Avenue A and East 11th Street. As for the construction, there hasn't been a whole lot of activity here in recent months. (Perhaps the building changing hands had something to do with this slowdown...?) Workers gutted and plywooded the space back in September. Work picked up again in December. Bobby Williams took a look inside the space last week... 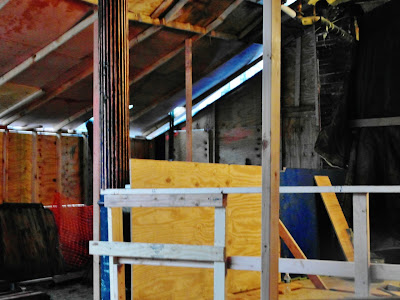 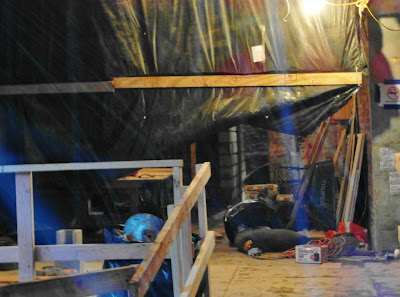 Meanwhile, a reader the other day pointed out that this location was still on the market for an owner, per the 7-Eleven Franchising site. According to the site, the estimated opening date is May 2013.

Related:
The organizers behind the East Village No 7-Eleven movement were guests Tuesday night on "Let’s Get Real With Chef Erica Wides" on the Heritage Radio Network. You can listen to the archived program here. The show is #56 and titled "7-Eleven Is To The East Village What Pringles Are To Potatoes."
Posted by Grieve at 6:15 AM

G0dd@mn these awful chain mongerers.
The residents of this building have been subjected to absolute HELL ON EARTH because 7-11 has created absolutely UNLIVABLE conditions for them during their stupid, obnoxious renovation - they could care less about anything but profit and market share, they have the GALL to say they are going to help the neighborhood (like we're all total idiots) when actually they are going to do nothing but destroy and weaken it. In the snowstorm they created a dangerous condition around the perimeter of their ENTIRE corner, they are the ONLY business that didn;t shovel, they haven't even opened their doors yet let alone found an owner (boy do i pity whoever that poor b@stard might be) and look at all the harm they are already causing.
I'm gonna call it.
A 7-11 will NOT open on this corner.
The enormous outcry from the community against their detested and destructive presence is gonna stop this one dead in its tracks.
Use your voice and say HELL NO! to 7-11!!!
We are gonna stop this thing!

Until that 7-11 has a franchisee, will the pro-7-11 folks not trot out the "they are just franchisees" excuse? We have carte blanche, right?

Maybe when the plywood roof finally collapses onto the ground, we can use it to cover the ice moat that surrounds the building since they don't shovel. Perhaps it's one of the "services" she's talking about?

Maybe we can fundraise, become the franchisee ourselves and run it into the ground!

What, there's no franchisee?!

That explains that. Dallas decided to throw spaghetti at the wall to see if it sticks. Good luck finding a franchisee/sucker, because the foot traffic on that stretch of Ave 10am-5pm Mon-Fri is minimal. You want foot traffic? Go to First Ave.

Then there are these 5 things possible franchisees should consider:

2. 7-Eleven Franchise Agreement can change at any time.

3. Buying a 7-Eleven is buying yourself a job (you’re not going to be a business owner, you’re going to be a manager who's told how to run his store)

4. 7-Eleven’s are almost impossible to run hands off (The company has put in place strict requirements for you to be present at your store).

5. 7-Elevens have an income CEILING (figure it being about 5% of sales)

Make that 6 things to consider. I forgot to add "CONTROVERSY." A sizable number of people feel so strongly about the incoming 7-11 that they have launched a community-wide boycott that has attracted wide media attention from local outlets to the NY Times and the BBC.

This is now one of the ugliest eyesores in the area. Thanks 7-Eleven!

It's running itself into the ground.

The website unhappyfranchisee.com has a page dedicated to 7-Eleven franchises. Corporate talking points VS real franchisee experiences. To say 7-Eleven's franchise owners are not happy is an understatement.

Whose job is it to secure the ground floor of the building?

Wish those who have apparently so much hate and energy against 7-11 had done the same with the bars. But apparently those do not bother them as much I guess...

Anon 3:33 You are welcome to start your own anti bar group when you get tired of waiting for people to do things for you.

anonymous 3:33 - you criticize NO 7-11 for not taking up the battle of the bars. how do you know if folks were part of anti-bar activities? and why would they add bars to their NO 7-11 agenda?
and anonymous 3:33, what have you done to stop the proliferation of bars around here? or to stop the 7-11? actually, what have you done to help preserve our neighborhood? there is always something that should be preserved around here.

Protest the HOWL Festival and movie night in TSP!!!

The people behind these two events are the real problem.

Every day I see workers in there, and just this morning I saw a guy carrying a big load of crap on on his back and into a truck. Second, these workers are the same demolition guys that Shaoul uses for all his renovations, Rose Demolition, (and, weirdly, Rose is also the name of his lawyers) so I'm guessing Kushner has agreed for them to finish the job they started. Third, it is normal 7-11 practice to build out the store and then find a franchisee later, it says so right on their website.

If there are in fact workers in there every day that makes it even worse. They should be fixing the loose plywood to be sure it doesn't fall off and hurt someone. They should secure the location so people can't get in there. Shoveling the snow before it freezes over into a sheet of ice wouldn't hurt either.

unfortunately due to greedy landlords we are going to see more and more of these big franchises, they will be the only one's left stupid enough to pay $$$$$ rent - BL

This is interesting: The longest 7-Eleven Franchise Owner Talks.

Dick Newmark started in 1962 and has been in and out of eleven 7-Elevens since. He said one of the biggest changes to 7-Eleven’s franchise system came after a Japanese management took over the bankrupt American operation in 1991.

In the late 1980s, prior to bankruptcy, all of the 7-Eleven franchise agreements were extended to 2000. Newmark says the new contracts with new management were "the worst thing that ever happened to the franchisees."

The most onerous aspect of the new contract, in Newmark's view, was a limit on the number of products not offered on 7-Eleven's recommended list. Under the new agreement, 85 percent of inventory purchases (at cost) had to come from approved vendors, he explained, or franchisees would forfeit 2 percentage points of the contract's 50-50 gross profit split, up from a 48-52 percent in older contracts. "They gave us 50 percent, but they also hit us with a promotional/advertising charge of 1.5 percent of gross profit for high-volume stores to as little as 0.5-percent for a low volume stores," he said.

When Newmark continued to carry sandwiches from a non-recommended supplier, which had a loyal following among his customers, alongside 7-Eleven's proprietary sandwiches, Newmark found himself in breach of contract. "I was prepared to fight it," he said. "My argument was by selling only the proprietary sandwiches, I was not able to maximize my profits. Eventually, I discontinued my other supplier's line altogether, as 7-Eleven grew the category. But since then, our sandwich business has not done as well."