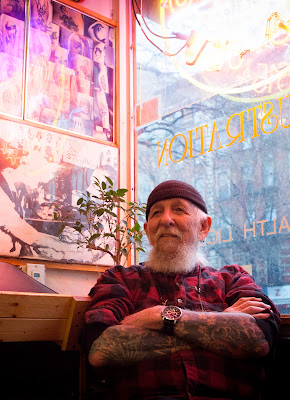 When I moved here East First Street was ravished. First Street between Bowery and Second Avenue looked like fucking Dresden, literally. Particularly right here where we sit was like junkie heaven. I remember one building between B and C or C and D, where there were junkies lined up down the block and some guy with a string in a burned-out building would take the money up in a can and drop down the dope in the can. In wintertime like this there were 55-gallon drums burning at every corner with guys huddled around it trying to keep warm.

Fame and fortune brought me here, like everybody else. Why the hell else? If I wanted fun in the sun, I’d have stayed in Miami. I was pursuing a fine art career and had some pretty good fortune with it. I was making sculptures out of fiberglass and polyester. My first one-man show was 9 months after I got here and I had one every year after that until I started tattooing. It was my intent when I first started with the tattooing to tattoo and do the sculpture on the side, but I soon discovered that you can’t serve two maidens.

I made the transition very carefully and slowly. I had tattoos from when I was a kid and when I was in the Navy, so I looked around the city and there was nothing here. Tattooing was banned in the city from 1962 to 1997, when we moved into this shop. At the time, the nearest place was up in Yonkers called Big Joe’s. I spent two years going up there, hanging out, watching and gleaning information. I was in the process of getting my old work covered up and I’d be asking questions and everybody would shut up. They didn’t give up the information. And the more they shut up, the more interested I became. Fortunately, there was a guy visiting up there that became a key figure in modern tattooing, named Zeke Owen, who was the first to give me any real information. And by 1976 I started tattooing.

I worked out of the loft I lived in on Houston and Bowery. I lived there for 34 years. I advertised in the back pages of The Village Voice even though it was illegal at the time. I never had any problems but I must admit that when I first started I’d jump every time the phone rang.

One day the buzzer rang and I went to the box and said, “Who is it?” “It’s the State Police looking for Mike Bakati.” I said, “Oh shit, it’s all over.” I quickly put on a long sleeved shirt and went downstairs. They asked if I was Mike Bakati and asked, “Do you do tattooing?” A long pause, and then finally, “Yeah, I do tattoos.” “Well good, maybe you can identify these for us.” So they showed me a bunch of tattoos relating to a guy who was murdering prostitutes working on Eldridge Street and some of them had tattoos. They thought perhaps I could identify the tattoos, if nothing else. By the time we finished, I asked the guy, “You knew I was here?” And they said, “Oh we know everything... and by the way, I might be back to get this tattoo fixed.” I felt better after that.

We had to move out of the loft about 8 years ago, because the building was replaced by a glass and steel apartment building. The building was 295 Bowery, which should have been a historical landmark. We tried to save it. It had been a notorious bar and whorehouse in the 1890s called McGurk’s Suicide Hall, because a lot of prostitutes committed suicide there. It was a notorious and nasty place.

It was also the first building in Manhattan to have a neon sign. By the time I first moved in, the ground floor was still operating as a wino bar, run by a great big old guy named Henry Davis. He had been the manager of a very famous burlesque house on Bowery below Houston Street called Sammy’s Bowery Follies. He was a nice but big and fearless old dude. He must have been in his early 80s then and I had seen him more than once grabbing guys by the throats and throwing them again the walls. When my older son was like 3 years old he asked me, “How come you’re living down here with a little kid like that with all this bullshit going on,” and I said, “Henry, I’d rather him see all this bullshit now than see it for the first time when he’s 30.” And he looked at me and said, “Oh yeah, I see whatcha mean.”

Tattooing is a truly democratic form of expression. It crosses all socio-economic and religious boundaries — even more so now. Back then there weren’t as many black people or women getting tattoos. Now for women, it’s like 50-50. That’s been the most interesting change. That and the popularity of it. In the 70s and 80s, it was not as exposed as it is now.

Great piece - he seems like a cool, funny guy!

I love this guy

Great interview (and Mike has such a great face!) -- I love this feature so much. James Maher, you are a rock star.

Always see him in the window when I walk by the shop. Great interview and his description of the early illegal days had me on the edge of my seat.

Great interview and pic! I see him when I pass by sometimes and he looks so cool I'm too shy to say hi.:)

These continue to be so interesting - nice range of EV folks !

Bravo!
These get better every week!

Once again, another fine addition to the book, James!

I love that cop story.

ditto what these folks said. love to uncover the folks that have been here for years. awesome.

I remember Big Joe's! Took my sister there for her first tattoo back in the late 80s.

Great interview with a great guy, what a shame about 295 Bowery! so much history lost

LOVE him. Go in and chat with him sometime. Sweetest guy ever. He loves chit chatting.

Yet another great profile of a person some of us see all he time. I've seen him a number of times skating through - always looked like the kind of man that would be solid and interesting. Thanx for confirming that. I was born and raised in scenic Yonkers (always beena strange place) - now I gotta stop by and say hello to him. Glad you have had an interesting life - the way things are going that too will be a thing of the past...

I walked into his store today and said hi! I told him how much I loved the piece about him and the insight into his life. I mentioned all the nice comments about him on The Grieve and he has not read them yet. He is real sweet!