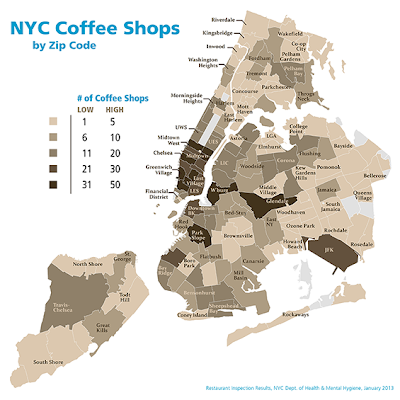 The economists over at StatsBee, a blog via NYCEDC's Center for Economic Transformation, examined the Restaurant Inspection Results from the health department to find the number of cafés, coffee shops and tea shops in the five boroughs.

In total, they found 1,700 such places. According to their research:

Researchers also looked at the breakdown between the chains and independent shops. And what they found:

With the Restaurant Inspection Results list, we counted 454 Dunkin’ Donuts (including hybrids like Dunkin’ Donuts/Baskin Robbins) and 272 Starbucks locations. 42.7% of the City’s cafés are one of these two major chains, with the remaining majority made up of smaller chains or single-location establishments. 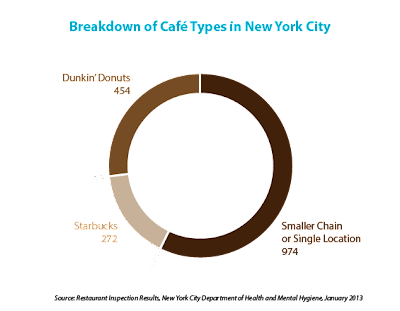 Find the full report here, including an interactive map. Not sure how telling any of this is, but we do enjoy conversations about coffee. And chains/franchises.

Does the East Village start at 5th Avenue now? When did that happen? :p

@francesca It's a zip code boundary, not an East Village boundary.

are zip code regions roughly the same size around Manhattan?


The citywide numbers are striking on their own though. 43% Sbux/DD? wow

Yeah I get that. That was my point - the researchers call 10003 the East Village zip code which isn't accurate since it goes too far west to be *only* the East Village. Also, the emoticon :p denotes that the person I kidding or being sarcastic.

@francesca: Since the ZIP codes don't map super well to neighborhood boundaries, I tried to describe the ZIP code with the predominant representative neighborhood. I know it wasn't perfect, unfortunately-- I wish ZIP codes were easier to summarize in NYC!