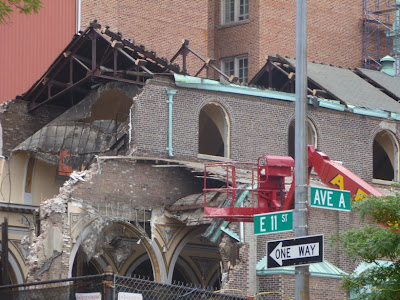 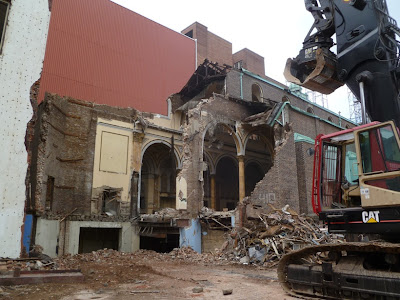 The photos and illustration are courtesy of Anton van Dalen

Made this drawing today and yesterday, also took the photos.

It's about a church that since 1917 has been an important integral part of our immediate neighborhood and community.

I, as so many of my neighbors, looked on in disbelief through a crack in the forbidding veil covered sidewalk fence.

We tried to comprehend, as the wrecking appeared done surreptitiously, this senseless shocking self-destruction.

And the complete betrayal of a family oriented community and a history that has endeared me since 1971. 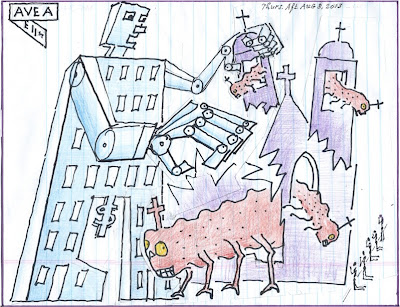 Scaffolding arrives for demolition of Mary Help of Christians
Posted by Grieve at 6:10 AM

I've been watching this travesty from Ost Cafe across the street. It feels like the neighborhood is being violated! Terrible to see. Worse to know. The building was so beautiful.

Why didn't this church have a higher attendance? I have lived near it more than 20 years and it never drew people the way the church on 14th Street next to McDonald's does. It's too bad the Catholic church couldn't have found another use for it as a community center or something. I say this as someone who isn't even a fan of the Catholic church but you hate to see these beautiful old buildings torn down.

Of all the short-sighted money-driven obliterations foisted upon this city over the last few years, this is the one that I find the most incredulous and that leaves me the most pissed off.

How sad and terrifying that an entire community is utterly powerless to stop something that apparently nobody in this neighborhood wants.

As someone who have lived in the community all my life, I have never ever thought I would witness this corporate destruction of this beautiful and sacred church. Though I do attend Immaculate Conception Church due to availability of very early mass, I did often go to Mary Help of Christian to pray and confess. I stood outside today on my way to work with total disbelief for a few minutes as others just passed by me without hesistating a second on why I was staring. Very sad that I was unable to win the lottery (or make one of my start-ups a multi-million success yet) to save this church like the anonymous donor who saved St. Brigids with a $25M donation.

This is the beginning of the very end of the East Village that I loved and cherished. No more Prince or Pallermo Bakeries, no more Polish butcher shops, no more businesses owned by generations of families, no more weekend fair at Mary Help...:-(

At the beginning of the 21st century, the problem is that more churches aren't being torn down.

I'm sorry, but why all the grief for this fugly old church? I'll miss the flea market, but beyond that, we need housing far more than we need God in this neighborhood (granted, I'm sure the housing going in will be entirely the wrong kind, only affordable to the spawn of oiligarchs and hedgies, but hey, in 30 years it might be OK).

I think people on this blog tend to assume that all development is bad development and all old stuff is worth keeping. It's not. We need more housing in this town. The question that matters is: housing for who?

wah wah wahh...everyone wants to support the church when its getting knocked down but where was the support when it was in need of money before?

easy to complain after the fact

beginning of the end...you people speaking of these places that are no more...maybe they are no more because you didn't shop there enough...business don't just go out of business for the sake of it...

Here's what I don't get. Churches, especially Catholic churches, are beautiful -- ornate, detailed -- and built well. So why not simply repurpose the building if it cannot be sustained as a church or school? (Setting aside the argument for a moment that it couldn't be sustained.)

The developers could have built on top of the existing structure and maintained the first few floors as a beautiful lobby, recreational space, and even a few apartments.

The Abbey, on 16th between Rutherford and 3rd Ave, was completely repurposed as condos, but the building -- including much of the detail, like stained glass -- was left intact. It's gorgeous, much prettier and more unique than any of the glass-and-steel shitshows nearby on 14th and 3rd.

I'm really big on Landmarking as one of the few ways to slow the remaking our community. But I go back and forth on churches. Some of the catholic church’s history doesn’t make me want to preserve the structures that even it has given up on.

But for me, I hope that we’ll start looking more often at the larger forces that are at the root of this greed-driven reinvention: Density, and the pendulum swing back from “white flight”. Gas prices, car insurance, green living, among other trends, are driving the masses back into urban cities. And I see no community more tightly caught in this vice than the EV.

I don’t think that marches in funny costumes, or online petitions, do any more than allow us to vent, let the pressure out, and excuse our politicians. I think our elected leaders are the only ones who can address our vanishing city. (I don’t even blame the developers and real estate goons, well, not that much. They are just going where the money is, cuz honestly, they are in business to make money, and if they don’t, they go out of business.)

But the only way our elected leaders will do what we want them to do is if we go to them. We’ve got to show up – at debates, at press briefings, at the polls. And it’s not just “being heard”. We need to demand that our voices be acted upon, but that only happens when we have the numbers. Of course, I’m open to being completely wrong, and happy to hear other solutions.

Don't blame the developers. Blame the institution that sold the property; The Archdiocese of New York. And, as I've said before, if you want to see where the money went, just walk one block east and four blocks south and behold the rebuilt St Brigids. Mary gave her life so that Brigid could live.

They should have waited until August 15th, then it could have been called the Assumption of Mary Help of Christians Church! Ba-dum ching!

The Catholic Church, as Dave on 7th said, made a business decision. The NY diocese cannot afford to maintain empty churches, no matter how beautiful they are. There just aren't enough church-going Catholics in the EV anymore to support all the church's built at a time when the EV was packed with actual church-going Catholics.

Yes it will be horrible to see yet another luxury condo or dorm put up in this church's place, but maybe we should be discussing why it is that about the only housing going up in the EV is for the rich or their student offspring.

Beyond the debate over old versus new, the politics and scandals of the Catholic church and other such arguments one thing is certain here: a place that was not only a central part of the community's historical and architectual landscape, but more importantly used as a religious and meditative sanctuary by lower and middle income people is literally being destroyed in place of commercial interest for, to put it simply, people with MORE MONEY.

The old zoning here had no height cap, so Steiner might have repurposed the church as a grand entry (since it has little floor area relative to its height). Under the current zoning, repurposing would require a much greater sacrifice of rental space.

I've never had any religion, and I don't want to defend one, but some of my Catholic believer friends are among the most progressive people I know, and they don't just talk, they act on their human values. The institution, like all institutions, can be just disgusting, as you can see in Anton's drawing.

I think people's displeasure at the fact that the church is being destroyed is not motivated by religious beliefs or any feelings (positive or otherwise) towards the Catholic Church, but rather the pointless destruction of history for the sake of corporate greed. I come from a long line of proud atheists but I have no problem admitting that some of the most beautiful buildings in the world are religious structures.

This church was sold by the Catholic church because they could not justify the expense of keeping a nearly unattended building going. Nobody stepped up to save it as with the historically very important St Brigid's on Ave B. A big luxury building like those on Houston will be built here, maybe a Whole Foods like market will rent the ground floor. Maybe some other business' which employ New Yorkers will take some space. A lot of people (although certainly not poets and artists) will live here and space that was dormant for years (except the flea market) will be a place that is alive again. This was a battle none of could win, focus on the smaller ones like the 7-11 attack those are the kind a community has a chance of defeating.

1:47 -- It wasn't the expense of maintenance that closed it. If real estate values here hadn't risen, the Archdiocese would not and could not have sold it and the flea market, which was a joy to the entire community, would still be here Saturdays and Sundays. The Archdiocese weighed the congregation against the options, and chose to cash in.

It wasn't La Sagrada Familia Better question to ask what did the Archdiocese do with the money? Bright side blue collar construction jobs for a while and a piece of real estate back on the tax rolls.

...a piece of real estate on the tax rolls if and only if the developer did not receive a 10 or 20 year reprieve or other type of incentive/deal with the city. That info may be available somewhere, somehow... (?)

No new pics of the demolition I guess soon the back hoes will be digging the foundation and my favorite the fresh smell of pouring concrete in the morning.

Catholic churches and institutions like Saint Vincent's, Cabrini, and schools have been shutting down for quite some time although it looks like a wrap up now.
I'm reminded of two observations; one by George Trow in his 1983 essay The Context of No Context:

"New York is an inhuman machine put together to serve the most ambitious interests of a certain part of American secular society...In human terms, there is no reason to live in New York."

And before Trow, George Santayana's observation That the reign of a ruthless Social Darwinism will become most obvious as the Catholic Church seems to disappear.

Beyond the aesthetics of popular beauty in buildings, less often remarked there is also in Catholic thought a radically different economic ethos, war, and the state that also contrasts with the zeitgeist