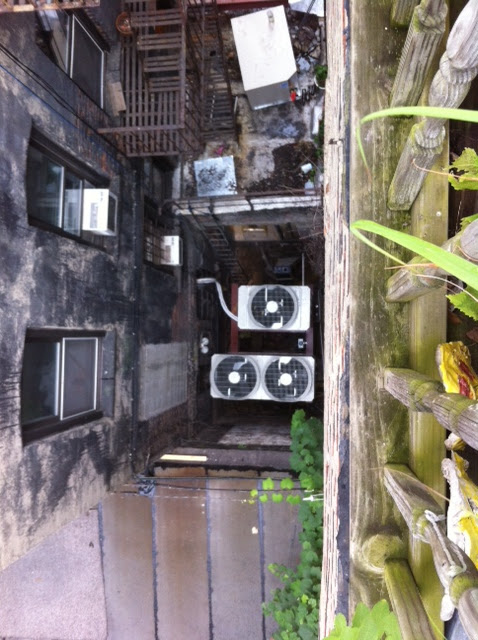 Last week, workers installed three AC units adjacent to the incoming 7-Eleven at 500 E. 11th St. (aka 170 Avenue A). A tipster sent in the above photo to show the apparently really annoying new units.

The No 7-Eleven blog first reported on this development Friday.

We'll go there for more:

Between 500 and 502 East 11th Street there is a narrow alley originally created to allow air circulation between the two buildings which were built sometime in the late 1800s/early 1900s. 7-Eleven has dug down into the alley and installed cement pillars and i-beams to hold three massive AC units which go off at 15 minute intervals.

Writes a neighbor:
“The units make a loud “WHOOSHING” noise every 15 minutes and since all the bedrooms are located off the alley, there has not been much sleeping going on in either building. The units are also blocking light and part of a window on the first floor of 502 East 11th Street.”

The city has investigated the complaints from neighbors and issued a Partial Stop Work Order. 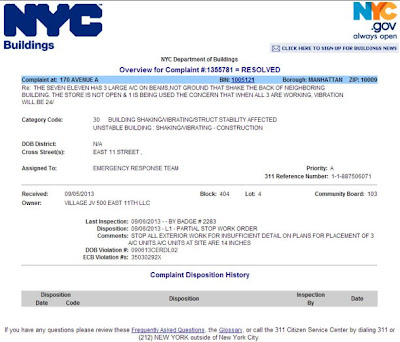 As the No 7-Eleven blog noted: "Thank heaven!"

Work on this space is now in the 12th month.

The latest from the 7-Eleven franchise site — updated Sept. 3 — shows that the store has a September 2-013 opening date.

Email ThisBlogThis!Share to TwitterShare to FacebookShare to Pinterest
Labels: 170 Avenue A, 7-Eleven, No 7-Eleven

Please follow up on this story - it is my understanding the residents will be shit out of luck and will need to take direct action to destroy these terrorists. If you were wondering what class war looks like, this is it.

Oh my god, I would go mental living by that! Please, I hope those units are removed. Come on!

What NYC is this in? Just drop some cinder blocks on them.

Why does 7-Eleven require these? What did the all of the other businesses who occupied this storefront use? It's pretty obxoxious placing them right outside these windows. 14 inches it looks like?

How is this in any way legal? I hope these units are removed asap for the sake of the neighbors affected by the noise. Since when can you block an escape area in case of a fire? Anyone that see's anything questionable in regards to this 7-11 must come forward and report it to the city. Quality of life and maybe lives are at risk.

Geeze this is not a blatent example of how this suburban industrial formula does not fit into this intricate cultural eccosystem. No modifying to the culture you're a new guest in. Charming.

They certainly would not tollerate you showing up on there suburban lawn in your car and reving the engine all day and night. Now that would just be common sense bad manners.

They probably need high-powered air conditioning to offset all the heat generated by the spicy beef patty.

And those perpetually rotating hot dogs AKA The Colon Blasters.

Lived next door to a new fireplace smokestack by mr richie rich. Smoke was killing me, blows right into my windows. Managed 2 dead rat drops down that chute, did have to clip some wire mesh around the stack, no big deal. Now they have probably 50k surveillance system on roof to deter. Well, #1, I feel 1000 % better when I do still choke out on their smoke, and #2, I am still busy busy busy.

Seems to me you give the city a couple of weeks to fix the issue then take matters into your own hands.

You can buy block ice from United City Ice co on west 45th. Not sure what size blocks they sell there - I have bought 10# or even 25# blocks in the past from other suppliers. Pay cash.

Drop those m'fing large blocks of ice from the roof where the picture was taken. That will fix the issue and there's no evidence once the fragments melt. If you wait till November, the ice could even have been due to natural causes.

Hehehe, gotta say reading the shenanigans in the later comments had me smiling!

how 'bout pouring buckets of water onto them? it might short them out.

Kushner sent in a "fixer" yesterday -- an AC specialist. He was an affable man, brought in because he "Owes Trump a favor" (a direct quote); however, he said, directly, "We can move these units back a couple of feet, but the truth is, you can't win this battle." To everyone here on E.V. Grieve, no matter your humor, your politics, your opinions, your harrumphing, bents, designs, and opinions: The Kushners of this world and their nasty minion (Westminster Management on 12th St.) are ruining what's left of the East Village (I know, I know, many of you think it's already ruined). Ice blocks raining from the roof (great idea, by the way) are not enough. Votes aren't enough. Unless we stop these bloated bastards now, we'll all be living on top of their giant air conditioning units, sweating and sleepless, while they take what's left of our lives to fuel their engines. We're fucked. Or not...

I'm not about to roll over and take a 7-day old hot dog up the arse. Quitting is for bitches. Fight on!

If I lived above that thing I would dump oil into it all night and fuck that thing UP! 14 inches from a bedroom window???

I know New Yorkers don't like chains.. but you can think of 7-11 like McDonalds.. Actually they have more locations worldwide than McDonalds.. about 50,000.. That means they got the money and credit to turn out your lights.