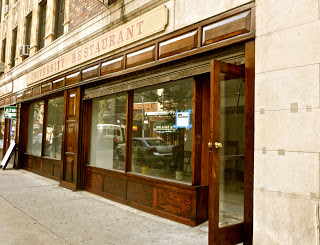 Just about a year ago, the University Diner closed for good after 60 years of business on University Place at East 12th Street... (Read more about that closing at Jeremiah's Vanishing New York and Flaming Pablum.)

At the time, Eater reported that the landlord was seeking a big rent hike — upwards of $40,000 a month. The subsequent "save our neighborhood diner" campaign wasn't able to help.

Early last month, Jeremiah got word that "some kind of international cookie place" was taking over.

And here we are. Yesterday, Andrea Swalec at DNAinfo reported that the new tenant will be Gunz Fine European Food, which "will sell cookies, snacks and other fine foods imported from across Europe."

Per the article: "Based in Mäder, Austria, Gunz ships packaged foods to 80 countries, and in 2012 boasted revenue of more than $116 million."
Posted by Grieve at 5:00 AM

That sucks. I love diners. Fancy pants food importers are for the birds!

'Cause there aren't enough places to fuel the diabetes epidemic already.

Good luck to them...

This news and the news on 4th Ave just confirms for my my decision to begin the process of moving out. I've lived on 4th Ave for 12 years now, but the last 12-18 months of shit that has happened in this immediate neighbourhood and further East is just too much.

I'd probably give up on the city altogether, buy a pickup truck and move somewhere in Maine or Nova Scotia where I can surf quietly, but my girlfriend is a New Yorker, so I guess we join the outflux to Brooklyn and try and find an area without NYU.

It's too bad, I love this area but I can't be here much longer

You are not alone Anon 9:44. I am a native. Originally from the Bronx and moved to Manhattan 15 years ago. I don't enjoy living here as I once did but don't know where to go.