133 Third Ave. lives on with 16 floors of glass and NYU dorm views 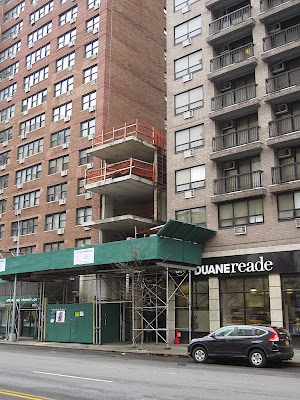 When we last checked in on the new building going up at 133 Third Ave. back in December 2012, a construction mishap (oopsies!) "sent wet concrete oozing through a wall and into an NYU dorm next door."

NYU The owner of the building that NYU leases the dorm from subsequently sued to halt the project here near East 14th Street, but the city apparently sided with the developers… the DOB ok'd permits for the 16-floor residential building as Curbed reported last March.

Anyway, we haven't seen much, if any, work here of late… but there is one new detail: A rendering on the plywood showing what's to come… (brace) 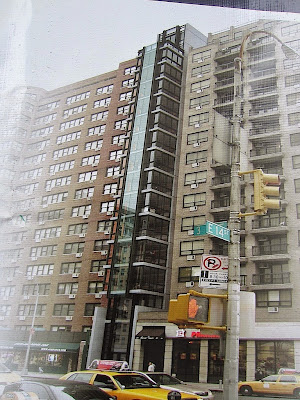 Those southern exposures are going to provide the best upclose views of an NYU dorm that money can buy! 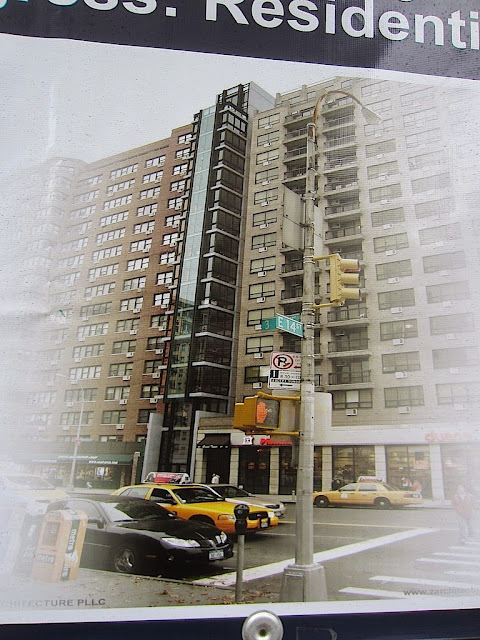 These "designs" (Blade Runner? A construction elevator?? A zipper???) look even worse in real life because people then install floor to celing curtains (bed sheets) for privacy from the floor to ceiling windows.

There's been no development, that site is a dangerous eyesore all winter It was never shoveled. Did the NYU students have the concrete removed from their dorms? I heard nothing since the accident that had concrete flowing thru the wall into the NYU dorm by mistake. So the construction firm or developer gets to hold the neighborhood hostage until development returns? this is unfair!

Its actually the owner of the building that NYU leases from suing the developer, not NYU itself.

That hideous blemish looks like an elevator in a Marriott, not a building someone would actually pay long green to live in.

I never thought I'd say this, but I prefer the generic 60's or 80's to that glass monstrosity any day!

The NYU dorm is on the site of the notorious Sahara Hotel, which was a haven of drug dealers and prostitutes. Via Jeremiah's Vanishing NY:

"In August 1973, the Times reported: "police charged the manager of the Sahara Hotel, at 201 East 14th Street, with homicide after finding his wife's body on the roof. They said Umberto Rivera, 34, the manager, said he shot Pedra, his wife, in their apartment Friday night when she threatened him with a knife. A hotel night clerk, Alfredo Medina, 32, was accused of aiding in the homicide by helping carry the body to the roof."

Not much changed over the years. A 1990 New York article cites suspicious fires, professional thugs driving out tenants, and crack dealers climbing through the windows where prostitutes did their business. The Sahara soon emptied of its occupants and stayed empty."

Having lived across from an NYU dorm, I can tell you some of the girls there "accidentally" forget to close their privacy drapes.

The developer did a poor job of maintaining the site while legal proceedings ensued. It got majorly trashed. A month ago, people broke through the plywood to frolic behind the wooden gate.

Now, will the MTA move the bus stop back below 14th Street? That's what it did when the site was active, then moved it back when activity ceased.

I know we all love to hate NYU, but I feel bad for the kids who will have to put up with constructions noise and dust, just like I feel bad for anyone else who does. They pay a lot to attend NYU and despite all the noise they make, I'm sure most of them like to study from time to time or get some rest. I would have hated it to be so close to a construction site when I was living in a college dorm and having to take exams, so I feel bad for these kids too.

My heart bleeds for the NYU kids.

It looks like they broke off a section of One Hyde Park in London and stuck it between two NYC buildings.
Just to illustrate the power of money and location, the Upper East Side had sliver buildings like this zoned out.