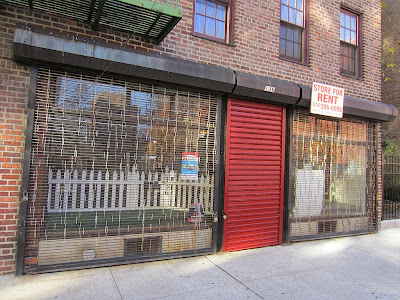 Back in November, Publishers Weekly reported that St. Mark's Bookshop had found a new retail space "in the East Village in a space near Avenue A and Third Street." The article didn't mention where, exactly, the rent-challenged new store will be.

We did a little guess-detective work and figured the space was likely 136 E. Third St., where Landmark Bicycles was housed before moving to the northwest corner of East Third and Avenue A.

Anyway, meant to mention this sooner! Jeremiah Moss got the scoop last week: St. Mark's Bookshop co-owner Terry McCoy confirmed that this was the space.

Per McCoy to Jeremiah:

We've been sent a proposed lease, and we have a lawyer who has gone through it and sent comments to the landlord, who is the city, or NYCHA. There's a long way to go to signing a lease, though."

Meanwhile, the store continues with its Indiegogo campaign to help raise funds for the move. You can find more details here if this is of interest.
Posted by Grieve at 5:00 AM