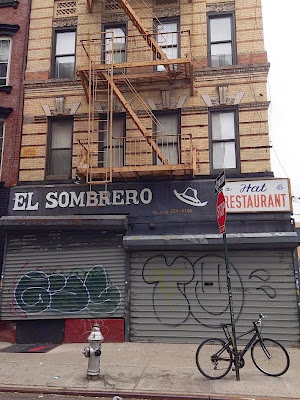 El Sombrero has served its last inexpensive meal and potent margarita on the Lower East Side. The family owned restaurant closed its doors for good after service last night.

Sad, but not surprising … the restaurant, which opened in 1984, had been struggling to stay open the past few years, as Jeremiah Moss first reported.

No official word on what will be taking over the space at Ludlow and Stanton. The deal for an Artichoke Pizza here fell through. An applicant named Two Almontes Corp. was on this month's CB3/SLA docket to take over the space, but they were scratched from the agenda. 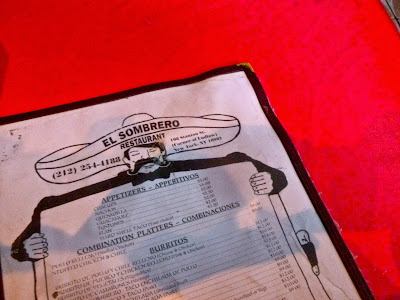 I just ate my last meal at The Hat last weekend, and you could feel this coming. The place was subdued, the food wasn't close to what it used to be. There were a couple of the old time regulars sipping beer at the bar, and only a few customers. The place was already dead, they just hadn't closed the casket.

The tourists at the next table over ordered the dreaded sizzling platter, which came out so hot that everyone in the restaurant started coughing on the fumes, even the waitress, and so the tourists apologized to the room for their mistake. We just laughed, since that mistake happened every time you went there.

Still it's sad to see an old friend go. Back in the 90s I knew one girl who worked in market research who would cab it all the way from our Midtown offices down to The Hat for lunch and then come back to work hours later very sloshed, but very happy. Even her boss knew but he let her get away with it.

Back then they had the takeout frozen margaritas in the blue wax paper soda cups with a straw in the summertime, they were so refreshing out in the heat. But after the cops shut down that little side business it was never the same.

Bye Hat, thanks for all the good times.

Their food was truly, remarkably awful.

@4:13 PM -- It wasn't always that way. You must have missed it before the mid aughts. When it was a thriving business and before the internet killed the to go margaritas the food was good and the crowd was fun and lively. Sometimes I would drop in with friends and find my mother and her boyfriend already there. We would push the tables together and it was a party. For many years it was the place for my family and friends to celebrate New Years Eve. The last time I was there it was rather sad but we will always have our memories.

There are some neighborhood type places where the quality of the food was not really that important. It was more about the vibe, the people you were with and a sense of general connection across all kinds of classes, races, ages, and so on. I know it sounds crazy these days to baldly state that the quality of the food at a restaurant was besides the point. It's not something to "discuss," you either get it or you don't. Had many good times at The Hat, many memories with memorable people. That's what endures, not a simple plate of XYZ. And that's what made the old school EV/LES what it was.

I agree that it's terribly sad that the Hat has closed, and that yes, the vibe was more important than the food. The margaritas were mediocre at best, but being able to take them out created a frisson of excitement. But anyone who defends the food at any point during the Hat's tenure must have a truly limited palate. I've eaten there since the early 90s and never once was it anything approaching good. Chipotle is definitely better. And don't label me as a chain-loving nobody, because I prefer to support local whenever possible. Just don't assume that local always tastes better.

The best Monday I ever had was spent at the Hat with their margaritas...great memories. Adios, old friend.

I never had any problems with the food or the Margaritas at The Hat.

I think I went there for the first time probably around 1990 at the ripe old age of 23 or 24 years old. To me going to that place at that time was yet another experience that I felt had the essence of what living in NYC and being in the LES was all about and I continued to go there over the years. I don't think it was exclusive to my generation to want a place like The Hat to always be around. There were several generations prior of similar people in New York. This is why for the life of me I can't understand where or why the transition was made from decades of young people that rejected materialism and all the trappings that came with it, to a generation of young people that now DEMAND a lifestyle of materialism and don't want to bother with places like That Hat and so many other businesses and cultural entities that really spoke the truth of New York.

We all love the idea of a neighborhood restaurant like the Hat, and everyone here is obviously a "REAL" New Yorker. Hey, we wouldn't be on this board if we weren't.

But paying for really bad "faux" Mexican food doesn't make you any more of a real New Yorker than the next, it just makes you a person that pays hard earned dollars for bad food.

Food there sucked (went my first time in the late 1980s). The take-out margaritas were funny i guess, but i'm not a fan of that cocktail so didn't indulge much. The "vibe" was more "blanquito afraid to eat in a Dominican rice&bean place" than anything edgy.

Frankly, i always thought Festival had much better Mexican anyway.

No loss as far as i'm concerned.

i can't really wrap my head around folks who say "no loss, really" just because they didn't like the place. obviously it meant a lot to a great deal of people. that in itself makes the loss lamentable.

These days, there are few places we would venture into, even once, due to Woo Bro Syndrome and/or off the wall high prices.

What's missing? Affordable, friendly places where the food is good enough and where we feel welcome, where there is mutual gratitude for an hour away from it all...

anon, 10:41 yes that's why i said "no loss as far as i'm concerned." Christ, i'm certain people were lamenting when the Gap on St Marks closed. Or when the fake "Alias" on Clinton recently closed. Me? Couldn't care less.

My opinon, the Hat had bland overpriced food, and likewise attracted a pretty bland crowd on most nights. You feel different, good for you.

Hey 11:06, i felt that way about the Hat in the 1980s. it was an overpriced restaurant for blanquitos who were afraid to even enter one of the many rice & beans joints.

Those places were what the Hat pretended to be, meaning cheap, welcoming and cozy with excellent food served by people who grew up in the neighborhood.

Oh, so now it's a blanquitos thing? We ate in the other local places too, from time to time, yes way back to the (early) 80s.

The Hat was welcoming... and I do not remember either our tables, or those around us, as being de un color o el otro.

I lived in the building above The Hat. The food was not great, but that wasn't the point of the place. However, it is the thing that killed the place. A restaurant serving mexican food on the LES should be PRINTING MONEY. I always felt bad that they couldn't figure out how to fight and stay.