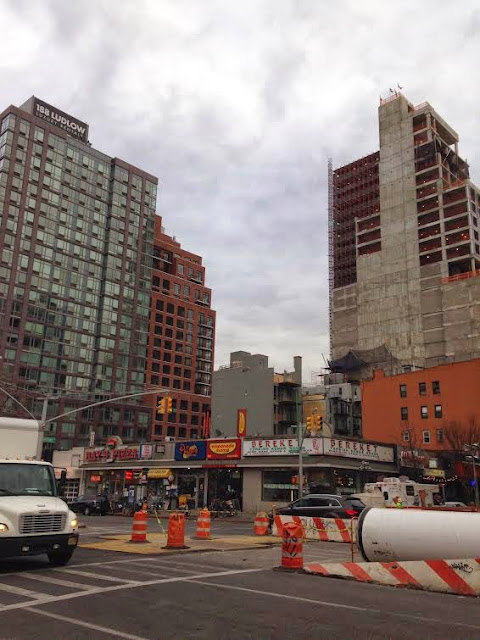 Ben Shaoul is reportedly close to buying that L-shaped parcel of single-level businesses on East Houston at Orchard Street.

BoweryBoogie had the scoop yesterday that Shaoul, the East Village-LES Developer-Landlord of the Year seven years running, was in (or close) to contract for 196-198 Orchard and 187 East Houston.

While the deal EXCLUDES Katz's, the rest of the businesses, including Bereket, Empanada Mama and Ray's Pizza, will need to vacate in the coming months. None of the restaurants that Gothamist's Christopher Robbins contacted were aware of the upcoming deal. "The man who answered the phone at Bereket said he believed the restaurant had another year on its lease."

"Their lentil soup is essentially a panacea for all the ailments that might plague a body, mind or spirit. (Of course, it must be eaten with hot sauce and with lemon.) And at $5, it's quite possibly the most bang for a buck to be had in all of Manhattan. Plus, all the guys that work there are incredibly warm and friendly. I'll be really sad to see it go. I only hope it'll move (not far away) and not close up shop for good."

As for what might be coming next, BoweryBoogie points out that developers are permitted to build up to 12 stories (or 120 feet) with inclusionary housing.

Per a BB tipster:

"It's hard to imagine a single block is being subjected to such a massive unwanted upheaval (with absolutely no benefit to the residents)."
Posted by Grieve at 5:20 AM

I frequent Bereket for their falafels and baba ganoush, I enjoy sitting at the window and people watch while dipping into my hot sauce. Now we can only expect another hideous foodie place like that gelato nuclear lab a few doors away.

Corpfood rules? What's next? Going after Katz's, Yonah Schimmel, Russ & Daughters. So soon you will not recognize the LES...

I already don't recognize the LES.

I know Empanada Mama is relatively new but I LOVE that place.
I grew up eating my mother's empanadas and these are sooooo good. They also let me bring my dog in.
Maybe I'm going to have to leave the country at some point, so sad.

The buildings around Bereket look like giant hulking vampires, ready to suck the blood out of another unsuspecting victim!

It's simple at this point, look around the neighborhood. Just assume that every single story structure in the East Village will be gone within the next three years...EV, just photograph all the single story structures remaining, write one article about the demise of the building and reprint it for every building...

Ben, better watch the spending. Need to keep some $ in the legal defense fund for, well, you know...
Love,
Mom & Dad

I'm buying this cute but otherwise useless little corner of Lower Midtown South as a gift to you to make up for all the really crummy things I have done to you over the past entirely of my most miserable and pathetic money grubbing life. On this site I am building a giant palace for the two of you to live in, complete with rooftop waterfalls and rain forests, where you can watch me bulldoze the rest of Midtown South straight back to hell. I plan to replace this neighborhood with a complete replica of the most boring elements of middle America and repackage them into the most exciting and overpriced development since Donald Trumps last brain fart.

Hope you like it and let me know when you will be sending me my allowance again,

Simcerely, Your Most Horrible Son,