Laying the Jefferson's new sidewalk, which made it through St. Patrick's Day weekend 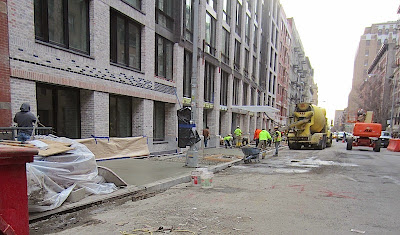 Over in the Northwest East Village on Saturday, workers were putting in the new sidewalk in front of the Jefferson at 211 E. 13th St. near Third Avenue … 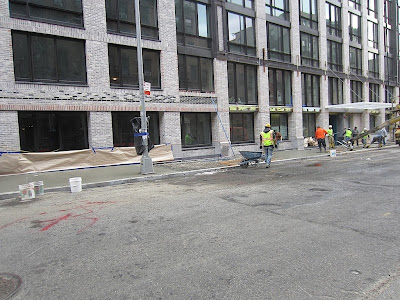 Given that it was DrunkPeopleinGreenShirtsCon all-day Saturday night, we wondered if that freshly laid sidewalk would become the target of mischief.

But! On Sunday morning, it was still in pristine new sidewalk condition without anyone's initials or concrete penises … 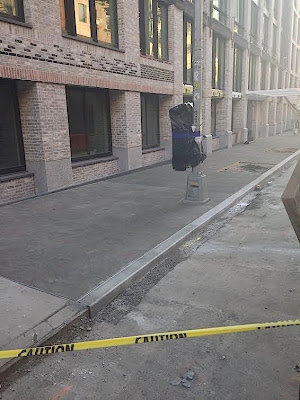 Under the careful watch of security guard … 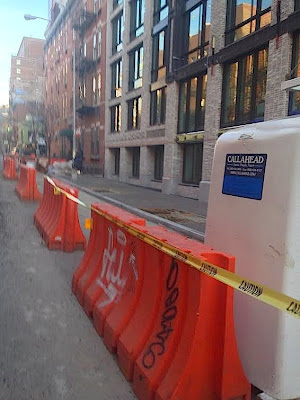 The Jefferson, the new 82-unit condo at the site of the former (sob) Mystery Lot in the North West East Village, is 100 percent in contract, The Real Deal reported last December.

Previously on EV Grieve:
The Jefferson reveals what '21st Century living in the heart of Olde New York' costs
Posted by Grieve at 4:59 AM

Email ThisBlogThis!Share to TwitterShare to FacebookShare to Pinterest
Labels: sidewalks, The Jefferson

I wish I had known about this; I would have left a big heart in the wet cement for that Mystery Lot!

Has anyone noticed the butchering of the building to the right of the "Jefferson" yuppie ghetto on East 14th, where photographer Itving Klaw took all of those wild shots of Betty Page in his second floor studio?