Whatever happened to those British call boxes outside The Telephone Bar on Second Avenue? 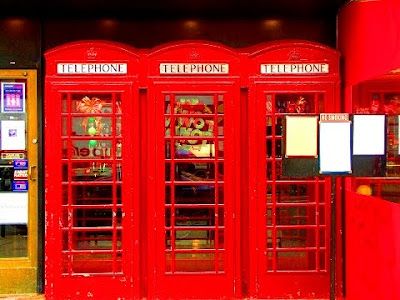 Hard to believe that The Telephone Bar & Grill on Second Avenue near East Ninth Street closed a little more than four years ago. The 22-year-old bar was later replaced by (glug! glug!) The 13th Step.

The front of bar was adorned with those old-timey phone booths (or, rather, British call boxes!).

In case you were a fan of the bar, this is for you.

An EVG Facebook friend came across a post yesterday on Messy Nessy Chic featuring a Harlem-based company called The Demolition Depot, which "makes it their business to go in and salvage the irreplaceable pieces of a building’s architectural heritage."

And at the Demolition Depot, you will find these booths for sale... 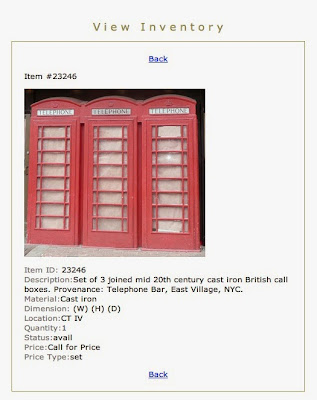 Now if we could only find some of those old Mars Bar stools...

Previously on EV Grieve:
The Telephone Bar and Grill closing after 22 years
Posted by Grieve at 4:59 AM

Email ThisBlogThis!Share to TwitterShare to FacebookShare to Pinterest
Labels: The Telephone Bar

The proliferation of cellphones killed that spot! As I remember, Abe Leibwohl of the Second Avenue Deli was a partner in the Telephone Bar & Grill at the outset. NYPD never did solve his murder.

Every cold winters night I walk by that location I crave their veggie Shepherds Pie and a pint of Fullers ESB (or 3). Can anyone think of a worse change of business than Telephone to 13th Step?

Funny you should mention telephone booths, just the other day a radio talkshow host did a whole riff on what ever became of all the phonebooths, he went on about how a couple of real sharp locals bought them all from the city for a song, shipped them to an unnamed third-world country where they are used as coffins for floating burial ceremonies, made a fortune on the deal.
Without naming the host will hint that he was raised working in his father's junk shop down on Ludlow, over 50 years go.

i have a pack of the old matches with the call boxes. i had it scanned and put on a tote bag. i love their shepherd's pie and bloody marys. i walked down the stiars to see the new place and just turned around.
glad to see the boxes were preserved.

13th Step has to be one of the top 5 worst places to open in the East Village. And I don't know if we can get rid of it either - or Hair of the Dog - all the idiots go there and spend their money :-(

Demolition Depot was previously "Irreplaceable Artifact" on 2nd Ave. & Houston (across from Mars Bar), until they took out a load bearing wall, and their building came crashing down... remember that?

Oh yeah - the idiot son of the owner of "Irreplaceable Artifacts" wanted to open an outdoor bar in the green space that abutted the building on the Houston Street side; he went in front of CB3 to get a license, but before it was even voted on he got a crew to carve a giant arch into the exterior wall that was going to be the entrance, but neglected to have them shore up the cut. I guess he forgot that the roof of the building had giant steel frames on which rested very large slabs of marble, ornate concrete, etc., but that weight, combined with the structural loss to a load-bearing wall was enough to bring the whole thing down. One of the store cats died in the collapse, but the other miraculously survived. There are still a few sculpture remnants visible in what was supposed to be his booze garden...

> Without naming the host will hint that

oh, just go ahead and name names. it's not like anyone will ever see them.

I used to conduct business (legal) in those booths. Sometimes it would get very fucking hot. Can't wait for the next emergency and no one's cell phones work and everyone realizes the payphones have been taken out. Much like the way all the streetcars were removed in the 30's, to force people to buy cars or use buses.

Plus I think you underestimate the power and readership of this blog, a mention here can make or break a career!

There's a scene in the Jonas Mekas Mars Bar movie where there is chaos on 2nd Avenue just after that building collapsed. He then shows the MB patrons, who never look up from their drinks.

Those call boxes would do well in Walter DeMaria's old studio...

nygrump - weren't you around for Sandy?

Meh. I still miss the Telephone Bar. Wouldn't set foot in the new place even if they promised Shepherd's Pie.