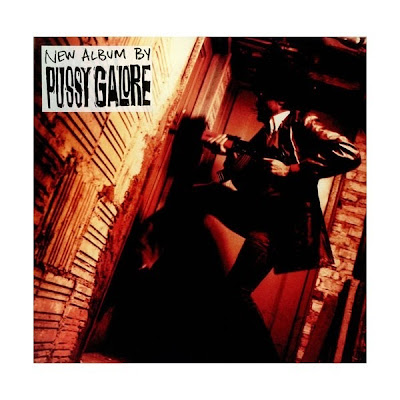 To mark the 25th anniversary of Pussy Galore's "Dial M for Motherfucker," Nick Hutchings at The Quietus tracks down the band members (Jon Spencer, Julia Cafritz, Bob Bert, Neil Hagerty and Kurt Wolf) to discuss the making of the record.

An excerpt from Mr. Spencer:

Pussy Galore, while we were working on familiar tropes and recognisable forms and genres was very much sort of anti-music or reacting to, kicking against something.

I think that confrontation was a big part of Pussy Galore.

It was an honest to goodness rock & roll band as well. I don't think you'd be doing this interview if there weren't some cool rock songs in there, if there wasn't some meat. If it was just a conceptual affair and it was just confrontation full stop then we wouldn't have mattered as much to people.

According to the always-reliable Wikipedia, a song from the record, "Kicked Out," is played in an episode of the Fox show "House" titled "Games" ... "when Gregory House plays it to annoy Wilson and induce a seizure in a patient."

Anyway, here's a live Pussy Galore performance from a few years earlier … 1987… if you want to annoy your neighbors… or just to enjoy!