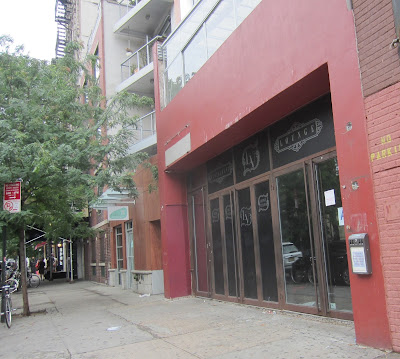 La Vie at 64 E. First St. finally closed last June following an ongoing battle with neighbors over a variety of quality-of-life issues... Neighbors had long complained that La Vie was operating as a club under the guise of a restaurant.

At the time of the closure, a tipster on the block told us: "They are moving all of the red velvet seating out to a Budget truck out front right now! The block is rejoicing."

Not sure if people will be rejoicing over what's coming next: Plans were filed with the city Monday to demolish the (rather ugly) one-story structure. Neighbors spotted a worker in a Hazmat suit on the building's roof yesterday here between First Avenue and Second Avenue. 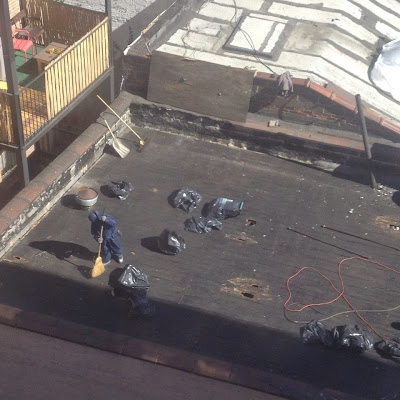 There's nothing on file yet to hint at what is next for this space... though you can likely expect some kind of new residential building.

DOB permits point to Ekstein Development — "a diversified and rapidly growing real estate investment firm with properties and businesses located throughout New York and New Jersey" — as the owner.

On March 4, the city served a full Stop Work Order for operating here without proper permits. 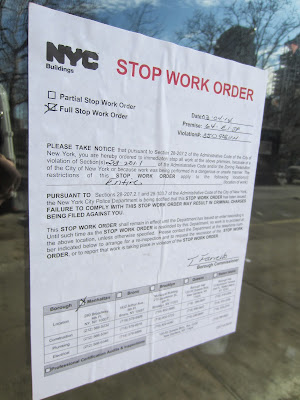 Also, given that one-level buildings are becoming extinct around the neighborhood… it's worth noting that the demolition permit is only for No. 64, and that there's nothing on file for No. 66, home to Abetta Boiler and Welding Service next door … so they appear safe for now… 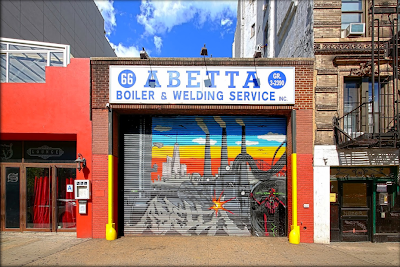 [Photo by Lucia Moore via Google]

La Vie has closed; neighbors rejoice
Posted by Grieve at 5:20 AM

See, this is a case where the city should make a developer hold out for the space next door too, and build a facility on both lots with ground-floor + basement retail, a community center on the 2nd floor with its own entrance, and then 8-12 apartments above that with four affordable units and a fancy penthouse unit with a sundeck to be the real moneymaker for the site.

Instead, you'll get two low-rise luxury condo buildings (one now, one in 10yrs or so) with diminutive (if any) retail space, no community center, and no affordable apartments. Good job everyone!

Yeah, Brian, let's just throw Abetta, one of the last of the old-time blue collar businesses still extant in a neighborhood that used to be full of them, under the bus, so we can satisfy your vision for what should go in that space. The hell with the fact that they are still a viable concern with employees who depend on the paychecks Abetta provides. Drones - who needs 'em?

Brian Van, why do you want a useful business out of the neighborhood? Abetta does installation, maintenance and repairs on lots of boilers around the neighborhood, as well as welding. You'd be surprised how often that's needed. Talk to a super. Sheesh. Next you'll think that all the locksmiths' storefronts would be better for the 'community' if they were restaurants.

Work on that space was stopped very abruptly, and I suspect the huge ASBESTOS ABATEMENT sign that I saw there yesterday had something to do with it.

Abetta has done a lot of work on my building. There is a definite need here for their business. Sending good vibes their way...

Abetta is pure old skool and great. For years they had the most absolute beatnik welding truck, so ratty but always on duty, though they did upgrade from that a few years back. Plus it is the kind of real local joint where, when my sissybar mounts on my motorcycle cracked, I just rolled in, pointed at the problem, and 5 minutes and 10 dollars later we were all welded up and good to go!
Would be so sad to see them go, but what else is new?

Man, I loved that old Abetta truck--it looked like a cartoon come to life.

Tho I'm a cranky almost-old person myself, I wonder at the schizophrenic comments on the site, EVG--half of the time, we're all longing for the good old days of Mars Bar and 8BC and King Tut's Wah Wah Hut, and the rest of the time, we sound like the Carrie Nation no-more-liquor-licenses cranks controlling Community Board 3. Which neighborhood is it that we want?