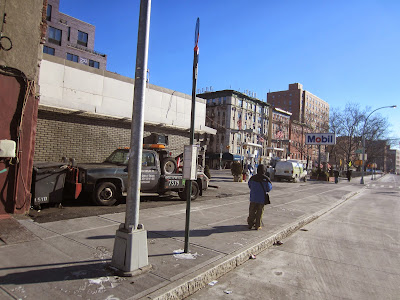 Hakimian Property has filed plans to erect a 9-story mixed-use building on the site of the Mobil station on East Houston and Avenue C.

This space has been destined for development for several years. But we thought there was still time left for Mobil. In an article last October in the Times titled Manhattan's Vanishing Gas Stations, the paper noted that construction would begin when Mobil's lease expires in two years. So roughly toward the end of 2015. Or so.

The site is currently occupied by a Mobil gas station, and its redevelopment will be beneficial to the surrounding neighborhood, reducing automobile traffic while eliminating a mostly-vacant lot.

Not sure we agree with that assessment. A new building won't reduce the amount of traffic on East Houston heading to and from the FDR… and people driving in the city need somewhere to buy gas. The BP station on East Houston and Lafayette will be home to this one day.

Gas stations also provide valuable billboard space for advertisers to show off some butt, like here on East Houston and Lafayette… 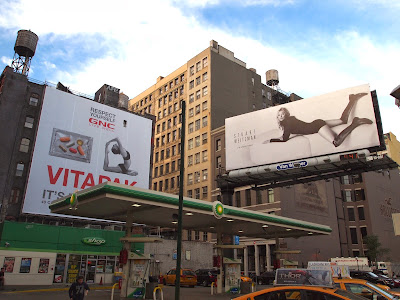 You have a little longer to get gas on Avenue C
Posted by Grieve at 5:05 AM

Is there a zoning / building code reason why the US can't have gas stations incorporated in the ground floor of buildings like in Italy, Japan, and Korea? Seems like that would be the best of both worlds - gas for car drivers, buildings for residence or commercial, huge profits for developers (and at the heart of it, that's why the city really exists, no?)

Serioulsy, though, there's no real reason why a gas station has to be a shabby single level cabin surrounded by a lot - unless the US building code enforces it. Can someone enlighten?

My guess would be safety reasons. Who wants a petrol-stinky, gas-filled potential bomb below their apartment? But I can't say for a fact that this is so.

They actually did this in DC for a building on M Street NW and 21st. There was a gas station there, they knocked down the station along with everything else on the triangular block and then built the building with the gas station as part of the ground floor. For the roof of the gas station, they put in grass so it became a deck.