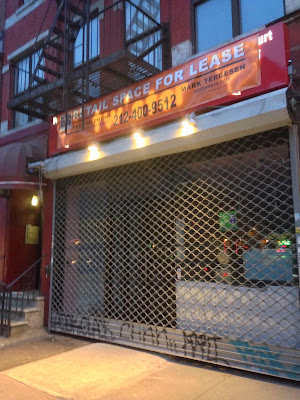 Twister has closed on Second Avenue near East Seventh Street. Which may not be too much of a surprise given that we never ever ever saw one person inside the place other than employees. (Somewhere we have a photo of an employee sitting by the front window playing a game on his smartphone ... next to a Help Wanted banner.)

The family owned and operated self-serve frozen yogurt shop opened back in August.

On this subject matter, several readers have noted that Twist on Avenue A appears to be dead. (What is the difference between Twist and Twister? Please don't answer.)

Still! Despite closures like this, the froyo craze doesn't show signs of ever slowing down... Red Mango opened earlier this year on Second Avenue... and then there's Funkiberry coming to Third Avenue. Per their website: "Funkiberry is the land of endless yogurt possibilities, where you rule the portions, the choices and the scene."
Posted by Grieve at 7:57 AM

Email ThisBlogThis!Share to TwitterShare to FacebookShare to Pinterest
Labels: FroYo, frozen yogurt, one yogurt shop for every two people who live in New York, Twister

I thought twist was definitely closed, but a couple of weeks ago I saw several people inside painting the walls a different color, and all the yogurt machines were still in place. Perhaps they have decided that their color scheme is what was holding them back.

My frozen food intake is ice cream bought at the bodega once in a while during the fall - spring months, ice cream and or frozen yogurt bought from a shop like this once per month in the summer. Maybe is global warming turns NYC into Miami next year this type of business would make some sense but until then???????

Duh! It wasn't served in a hoof. #HobokenHoof

I think they're gonna have to start spiking the frozen yogurt, and charge accordingly, in order to cover the skyrocketing rents in this neighborhood.

Back in my college days, I worked at a little cafe in Providence called Penguins - they sold a slew of different pita-bread sandwiches, had a full bar AND a frozen yogurt machine.

The shift manager always made us enormous fro-yo Mudslides at the end of the night to better motivate our clean up after closing.

I don't understand how people are still opening new FroYo places.. How man can the city possibly need? And this one opened at the end of the summer before the worst winter in decades.. they were doomed from the start.

Took my two little nieces there for dessert one night on the walk home after dinner. The yogurt was "liquidy" and tasted like chemicals. That may have had something to do with their short-lived tenure...

looks like frozen treats today are either "artisan" ice cream with potential customers spending 30 minutes sampling flavors as if they were judges at the damn country fair or some low fat, low flavor yogurt byproduct fabricate in Ohio.

They finish with their money laundering and now they out. Next gigs will be a food truck,
"start-up" gastropub restos, and condo flipping.

Twist on Avenue A was never "alive"!!

Something very fishy about that place....