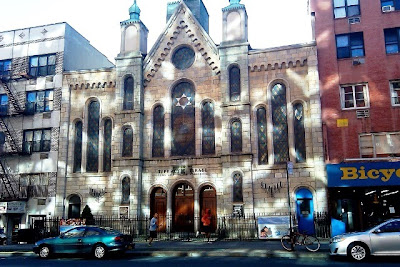 [Photo by Karen Loew via GVSHP]

The Tifereth Israel Town and Village Synagogue at 334 E. 14th St. is on the market for nearly $14 million, as we first noted last October.

Upon hearing of the potential sale, the Greenwich Village Society for Historic Preservation and a coalition of East Village, preservation, and Jewish history groups reached out to the Landmarks Preservation Commission (LPC) urging them to consider the building for landmark designation.

Now in response to the group's request, the LPC will hold a hearing on the potential landmark designation … scheduled now on Tuesday morning. (The LPC tabled the hearing back in October.)

Here's more about the building and the hearing from concerned neighbors …

As the building is currently for sale and new plans are being considered that could alter this historic structure forever or replace it, we think it is important that the Commission make a decision on its landmark-worthiness. Landmark designation would not prevent the current congregation from growing or even altering or adding to the building. But it would ensure that the key exterior historic elements and the connection to the building’s century and a half history remain.

The Landmark Preservation Committee hearing will be held on Tuesday, March 25 at 9:30 am at 1 Centre Street, 9th Floor.

If you are not able to testify, but want to show your support, please submit a sample letter of support created by the Greenwich Village Society for Historical Preservation. Find the sample letter here.

Previously on EV Grieve:
[Updated] East 14th St. synagogue on the market for conversion to residential, commercial use
Posted by Grieve at 8:11 AM

I predict a Saturday sale, and a demo bright and early on Monday morning.

Mr. Schwimmer, you got that crew's number?

It's doomed, sorry to say. Houses of worship and theaters are nearly impossible to use beyond their originally designed use. Saving the facade as NYU did with that ugly dorm on E 12th street only points out how compromises are usually worst than one side winning the battle.

anon @ 9:59 - in washington dc (around the mall area) old building facades are saved, with a skyscraper built behind the facade. it looks and feels weird, as you see this 3 story facade and 20 feet behind is a glass wall stretching up to the sky. sort of disneyland-ish, in a way?

As far as I am concerned the religious institutions and the not-for-profits are some of the biggest culprits in the destruction of the LES. There are numerous examples:
- The Educational Alliance selling a brownstone on 10th street to Ben Shaoul
- The Penetecostal Church on 12 and B selling the old Theater for luxury housing
- The Catholic Church selling Mary help of Christians and are beloved flea market to Douglas Steiner for the usual bs luxury dormitory style apartments with a roof-top deck etc

I agree that preserving components of these great old buildings is obscene - like NYU did with the Edgar Allen Poe House in the central village, but landmarking them is our best defense against that.

Support the landmarking of The Tifereth Israel Town and Village Synagogue.

anon @11:16
Agree, a big budget example is the Hearst Building in midtown (not to be confused with midtown south). In that case a beautiful 1920's building now looks like a spaceship used it as a landing pad. Architects seldom want to honor the existing building in materials or style their egos won't permit it so we get a building that is worst than its parts.

The faster we get rid of these religious building, the faster we fall to uber capitalism. Actually, Marx was wrong. Religion was the greatest obstacle to capital hegemony, and that's why they are not needed today.

"Houses of worship and theaters are nearly impossible to use beyond their originally designed use."

Is that really true or just an opinion? Washington Sq. Church is now condos, and the artist up on 125th St. turned a church. And plenty of churches have become theaters - no problem there. I'm no fan of churches, but not sure where you got this alleged fact.

@bowboy
It's not a fact but an observation from recent years regarding the real-estate market. Yes I am aware that Limelight was once a church and is now the bastard child of Bloomies perfumed 1st floor. I know of a small church on 13th that was converted to apartments near 7th ave. The timing and location is key with those conversions, with this building on 14th street in the EV in the year 2014 there is little chance it will become a thoughtful conversion to housing but a tear down and future luxury condo (in the artsy east village filled with shops, etc... blah blah blah. It is a shame that we are losing these pieces of our cultural and historic past but who has the money to win this battle?

You folks are commenting on this issue without any knowledge of the inner workings of the institution.

This congregation is fully self supporting. Funds for it's operation and maintenance come directly from its membership, and not from some endless source of benevolence. They have no intention of leaving the location or the community, and put the listing out to see if there was a beneficial partnership that would preserve the institution while allowing it to expand to serve the needs of the thriving community.

For the past 50 years, its members have worked tirelessly at their jobs, so that funds would be available to donate for the purchase, renovation and upkeep of the building and their contributions also represent thousands of hours in sweat equity. It is a constant struggle to maintain that cash flow, and it is feared that bringing landmark status to the building will bring financial hardship and saddle the congregation with the task of maintaining the building to the whim of the LPC.

There are many arguments to be made against landmark status, and I hope my fellow congregants will make their voices heard at the LPC meeting.

"put the listing out to see if there was a beneficial partnership that would preserve the institution while allowing it to expand to serve the needs of the thriving community."

This makes no sense to me, if the building is for sale the new owner will do what they wish with this building am I missing something here? If this temple was self supporting then why put it on the market? As with many of the smaller churches in the neighborhood as their congregations shrunk this building will most likely be sold to a developer with a long term agreement for space on the ground floor for the Synagogue's use going forward. This gives the new owner a tax break, the faith organization a home and the EV another luxury condo.

"Houses of worship and theaters are nearly impossible to use beyond their originally designed use."

I am a big supporter of saving our historical buildings however in this case I doubt there is little chance this building will stand for very long once it is sold. The congregation most likely will make a deal with the future landlord for a space on the ground level while above a glass and steel condo will stand. This is a valuable piece of land in the EV in the year 2014. The days of quaint church to housing conversions are over as the land grab in on and nothing that is not already landmarked is up for the highest bidder sad to say.