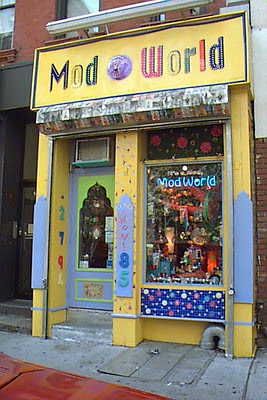 The store now lives on in a documentary of the same name. "Mod World" is the work of filmmaker-editor Jeff Turboff, an Upper East Side resident who lived for 11 years in the East Village.

"Mod World" made its debut on March 15 at the Producers Club on West 44th Street. Turboff is now hoping to screen the documentary at various film festivals. He answered a few questions for us via Facebook.

How did the documentary come to be? Did you start collecting footage at the time with a documentary in mind?

The first few years of the 2000s were a busy time for me on the independent filmmaking front. I was part of Quickflicks, a club where each member made a new short film each month. But I had also been on the lookout for something more ambitious than shorts. I was intrigued by the idea of making a documentary about artists, and at one point had started to make a film about Jonny Clockworks, the brilliant puppeteer, in his run-up to the year 2000 Henson Festival, but for various reasons the project was halted mid-production.

When I stumbled onto Mod World, a funky little East Village gift shop and art gallery; irreverent and snarky, but also upbeat and fun, I just thought I'd hang around for a few days, get people talking about their art, and maybe bang out a 5- or 10-minute docu short. But I really liked the people there, I got intrigued, and then I got patient.

What made Mod World a special place in your estimation?

My friend Laurie Turner in Texas, who I've known since I was a 14-year-old kid, owned some retail shops in Houston and then Austin, like Sheer Fantasy and Vertigo. I did a lot of hanging out in her stores, and she had cultivated that same kind of chaotic weird energy that eventually found its way to Mod World.

So when I stepped into Mod World, I think I must've felt a resonance there. Plus, Mod World had all this really cool, totally original, low-brow art. Modified Barbie Dolls, like Pinhead-from-Hellraiser Barbie, Giraffe-necked Barbie, stuff like that, and John Ross's really cool sculptures of cartoon characters in violent or adult situations… Ronald McDahmer, Drugs Bunny… I just thought, "This is so cool, I have to find out more about these people," and then it turned out that they were a really nice bunch. I immediately liked them and was intrigued.

The film's description includes this passage: "Lots of whacky East Village types pop into Mod World to share in the madness; the kind of people middle America might think of, if they were to think of the East Village." Do you think this East Village of just a few years ago still exists with the increased rents/upscale movement?

I think the East Village is changing. It has changed since then. But New York is a fluid place. Stuff comes and goes. Times Square ain't what it used to be. East Village ain't what it used to be. Everything loses its edge and adopts this sheen, slick with money and corporate infiltration, pushing out the cutting edge, until the cutting edge cuts back. I'm not talking about violent revolution, I'm talking about art and music.

Where the cradle for the next phase is, I don't know. It's not the East Village anymore, it won't be, probably, because the raw materials aren't there anymore. The raw materials are creatives with cheap rents. When the rents go up, the lifeblood of a creative community go with it… so "Mod World" the movie is a time capsule, yeah.

The film debuted on March 15. What is next for it?

What's next is, I'm rolling it out to festivals, if they'll have it, and interested in finding out if we can get it picked up for distribution. And if I have to do it D.I.Y.-style, I guess I'll find a way to do that. But I've got some faith that it's going to find legs, because the response so far has been fantastic. People love the characters, the music by Snuka, and John Ross's art, and it's a story that I think almost anyone can relate to, which is getting through hard times in the only way we know how; together, with love and a sense of humor.

Check out the trailer here...

One of the Mod World partners is behind It's A Mod Mod World, a bakery and gift stop retail store in Buffalo... 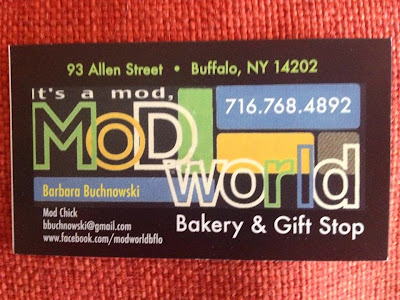 I have fond memories of Mod World but the trailer did not compel me to see the film.

I look forward to seeing this!

I still miss this wonderful store. What a fun, weird and happy place.

OMG. I was obsessed with Mod World when I was in elementary school and would go in about 3-4 times a week and just talk to all these guys. I was so inspired by their Barbies that I modified my own and they hung it up next to their own. I wonder how they're all doing now and where they are....

I loved that place and the people that worked in there. I still have a piece of art from there which is a monkey with a chainsaw and it's called, "Furious Little Monkey." I'd love to see this, is it online anywhere?

what a great store it was, they played really good music in there, and had those change purses with holograms on them, and a lot of crazy sculpture. i remember the owner and his dog, romeo i think? too bad those days are gone.