Last June, we noted that three retail spaces were available at 51 Astor Place… Meanwhile, earlier this year, several readers noted that the listings ("flagship opportunity!") for the spaces were no longer active on the RKF site … leading some folks (like us!) to figure a retail announcement was imminent.

Apparently not! An EVG reader pointed out that new "retail space available" signs went up the other day at the IBM Watson building (aka, 51 Astor Place, the Death Star). 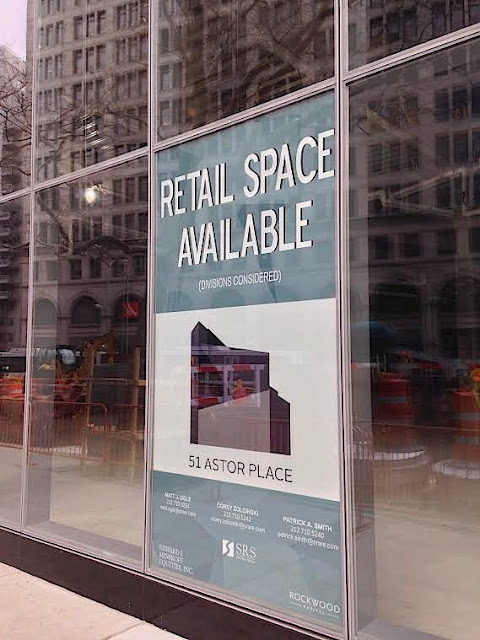 So while the building may be filling up with tenants, there aren't any takers yet for the retail portion… now being repped by SRS … 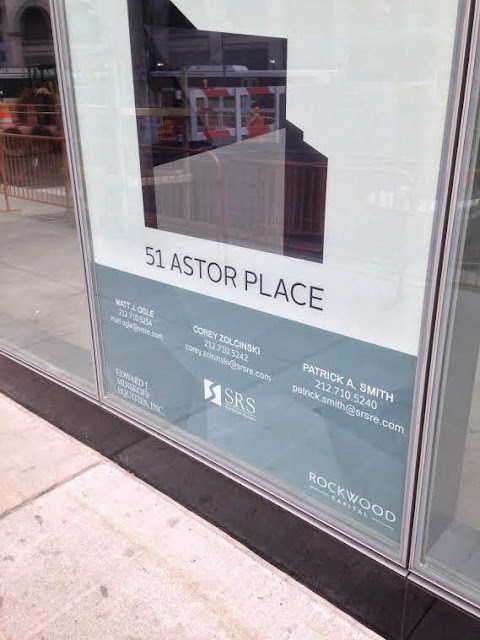 Here's part of their marketing materials… 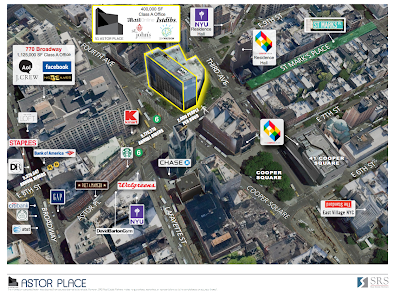 Hey, they left off the Grassroots!

Previously on EV Grieve:
3 retail spaces available at 51 Astor Place (22 comments)
Posted by Grieve at 5:00 AM

My son and I think a bumper cars place would be fantastic for that space.

I thought about the kind of business and the only answer I could come up with was "chain". Which of the invading chain stores is a tougher answer. Starbuck is over saturated which is not easy for Starbucks, Best Buy is 4 blocks away in Union Square so we can eliminate any corporation around the park. Trader Joes? No. 7-11, no way, Home Depot, Duane Reade, or Chipolte? No, no and no. Perhaps someone that has recently visited the suburbs can tell us which box store or chain is heating up the malls there, I can't figure it out.

Moods of Norway™ would bring an exciting international flavor to the neighborhood.

@Anonymous Ken from Ken's Kitchen
like we need more of those stretch work out pants that women wear all the time and everywhere, I hope not.

If it wasn't for the Death Fart, that's a map of any suburb in North America.

Anon @ 8:35 -- there's one store that only exists in the suburbs that I'd really like to see here: Play It Again Sports. http://www.playitagainsports.com/

That in half of the space with an arcade (with a mezzanine) in the other half...or aforementioned bumper cars...would make this building more of an asset to the neighborhood.

But, something tells me that this isn't the kind of suburban store you think would be attractive.

I second the bumper cars idea.

@OpenID olympiasepiriot
my goodness I have no idea what exist out in America besides but recently I saw a movie on 42nd street and there something called Buster and something which was some kind of fast food restaurant and amusement park jammed together... The tourists seem to feel right at home while I stood there scratching my head.

Cracker Barrel, anyone? Complete with rocking chairs on Third Ave?