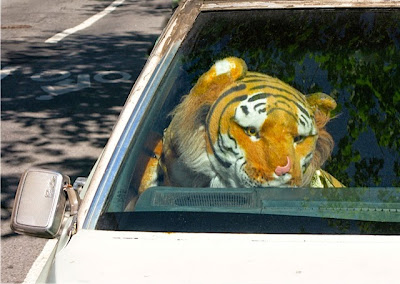 Stories from the Cadillac With the Tiger in it: Part 3: The End is Near

OK people — you have until tomorrow to say goodbye to me and the tiger.

It was too long of a winter. I'm tired. I'm done. But I'm going out on my own terms. After I smell the sweet fragrance of the black locust trees in the cemetery one last time.

I made it but other neighbors haven't been so lucky. Pete and Sandy used to keep an eye on me while they were living in their car. Pete is in his late 60s and he was born and raised on East 2nd Street. They were the supers in the building down the block for several decades until the new building owner kicked them out and had marshals confiscate their personal effects from the basement.

They lived in their car for a year after that turning down offers of housing in other boroughs. "Why are you doing that?" everyone asked Pete. "Because I live on this block" Pete would say "and I want to remind the new owner of my building of that fact."

You know what? That's the real reason I've stayed around as long as I have. It started when the newcomers started complaining about my presence and I was vandalized by the weekend partygoers. My owner and I decided I would be a reminder — a big middle finger to all that's gone on here. 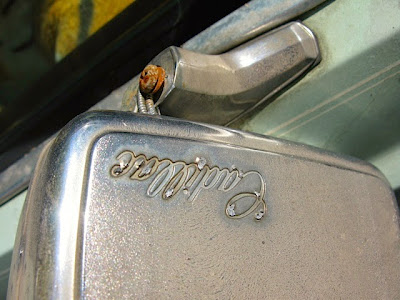 Twice a week in the morning my owner starts me up with a roar to move me for the street sweeper. On the few occasions he drives me to the gas station we pass everyone on their way to work — drawing smiles and "thumbs-up's" from the local old-timers and gasps and looks of disdain from most of the white collar professionals.

To the old-timers, I'm a relic and a connection to the old neighborhood — a survivor.

To the newcomers, I'm an eyesore and nuisance. I don't fit in with the new demographics and people are coming after me. I still can't figure out who called the four fire trucks and three cop cars who surrounded me late Easter Eve/early Easter morning.

Most little kids like me, especially since the tiger took up residence in my front seat. (Although some well-heeled moms will tug the arms of their kids and pull them away from me if they show too much interest.)

And I sure am popular with the tourists. (If I had a buck for each photo taken of me, I could be restored mechanically and cosmetically from top to bottom!)

My owner doesn't mind them taking photos as long as the tourists are not too obnoxious.

My owner put up a "for sale" sign in my window last year to gauge interest and, while he got a few responses, there were only three serious offers.

One guy from Bleecker Street who said he was a mechanic for years has no place to store me.

Another fellow from Avenue D said he's been walking past me the entire 22 years I've been on East 2nd Street. He said that he wants to park me on his block so he can look out his window every day and see me. He also wants me to accompany him every Wednesday when he picks up groceries from the supermarket with his meager extra cash to deliver to the homeless shelters on Bowery. (What's left of them anyway). He does this weekly run because he said a young priest helped him out at one of those missions in the 1960s when he was a former Gold Gloves boxer turned junkie. The priest helped him get clean and he never forgot that favor.

And then there's Ernest. He's been hounding my owner ever since he saw the "for sale" sign my owner put in my window. He's young and works as a custodian at the school on the corner. He claims he has a spot in a garage for me in either Brooklyn or the Bronx and wants to take his time and restore me. Ernest has been saving up each week so he can give my owner about $500 for me.

So who's it going to be? Well, my owner is going to surprise Ernest and give me to him for free. I'm OK with that. Ernest said he's going to take good care of me and the tiger. And who knows, if he follows through and does a good job on me, maybe someday I'll come back to my block.

So that's what's happening, folks! Hurry up and say your good-byes. My owner is having a little farewell gathering for me on the block tomorrow from noon until 3 p.m. between First Avenue and Second Avenue. All of my local admirers should stop by — maybe take a photo and drop a buck or two in the bucket for Ernest's restoration project of me.

Until then, I'm going to smell those black locust trees and get ready for my big farewell!

Also! The Cadillac with the Tiger in it now has its on website. Find that here.
Posted by Grieve at 5:20 AM

Hey, Uncle Bill, is that what you were talking about when I ran into you?

Your farewell made me a little teary eyed - you will be missed.

I think I bought some photographic flash units from the couple who own the car at a sidewalk sale a few years ago, they work perfectly.

I am so disillusioned with living in this neighborhood full of frat boys and fraternity girls ... sometimes I wonder if it's just me (getting older) ... I know NYC is about change, but this is personal.

But...but...what happens to Tony? Does he come with the car? And if so, will Ernest be good to him?