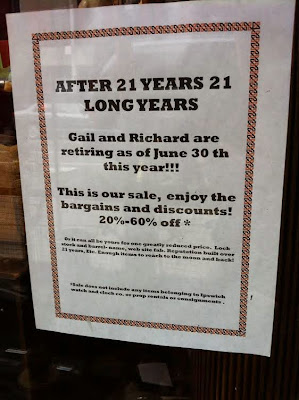 [Photo from March by William Klayer]

After nearly 21 years selling vintage cufflinks, eyeglasses and buttons at 334 E. Ninth St., Archangel Antiques is closing. It's officially a retirement. Today is their last day here between First Avenue and Second Avenue. Until 5 p.m.

There are sales. And there is stuff out front for free, as you can see in this photo by @peterfeld … 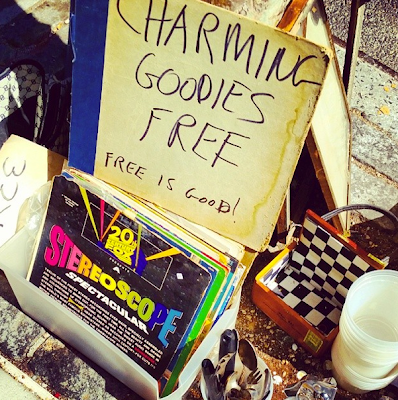 Blogger O That Sherry (via Jeremiah's Vanishing New York) recently wrote about the space. She has more on co-owners Gail and Richard.

Gail bemoans the situation. They cannot keep up with the increased rent. Besides competition with other vintage clothing stores in the area, East Village’s demographic is mostly students. Generally speaking, students do not have money or taste. Gail argues that to buy vintage, “you have to have a little sense of adventure, style, and be willing to stand out a bit.”

While there is nothing wrong with buying what everyone else is wearing from H&M or Urban Outfitters, she adds that “Young people just don’t have a sense of personal style.”

Ipswich Watch & Clock Shop, which had been subletting space here, has a new home at 434 E. 11th St. just west of Avenue A.

Previously on EV Grieve:
21 long years! Archangel Antiques announces retirement, store to close at the end of June
Posted by Grieve at 11:42 AM

“Young people just don’t have a sense of personal style.”

True indeed. Not only young people, either, but all ages. It's ironic that in our supposed land of individuality, and our times of unprecedented broad access to ideas and material goods, 99% wear the same mass-produced fake-working-class slovenly look of overpriced "distressed" jeans and t-shirts that look like they were picked out of a dumpster. One might say it's just an American thing, but it is spreading all over the world like a virus.

"We are all individuals!"

Archangel has only been there 21 years? It feels like they've always been there, at least since I moved here in 89. Sad to see them go. I love her quote about students not having money or personal style. She's right. In the past most people in the EV had amazing style- not so anymore.

Is there not another spot in the neighborhood to which they could move?

We've seen that lately with a few places that gave up previous spots and moved elsewhere due to higher rent.

Opening soon: The Secaucus Salmon! Fresh style every day including salmon pants, boat shoes and Ray Bans. And for all the Sarah Jessica Posers out there, we have a wide variety of old bed sheets re-purposed as shapeless togas and jumpers. Perfect for hiding the winter pot you never got around to losing! We guarantee you'll fit in SO much that you'll never be noticed again! You'll be slammin' in the Salmon!

Since the owners are in their 70s maybe its time to retire anyway. Of course she thinks kids have no style-if she had a house shed be telling them to stay off the lawn-maybe the students with money and taste shop elsewhere and maybe that competition is a bigger part of this than they care to admit - also she's awfully judge mental about clothes- she prob pays dirt cheap rent but a huge chunk of the population is severely economically stressed and maybe can't afford it - spending tons of dough to look 'stylish' is stupid anyway - dress how you like and be yourself

I picked up some gems earlier this month. Sad to see them go but happy for the money I have spent there.

Anon. 6:57 - let's see, where to start? "Students with money and taste" - ha ha ha haaa! Money they have, in spades, but taste? Strictly in their a**es. They all look like they've been stamped from the same boring cookie cutter. "A huge chunk of the population is severely economically stressed" - um, have you taken a good look around the neighborhood lately, with its $16 cocktails, $14 appetizers, $25 entrees, and boutiques filled with wildly-overpriced clothing? Where is this immense "severely economically distressed" group of whom you speak? No doubt here are some in the EV, but this is not 1980, so these days, they are in the distinct minority; you yourself reference all the "students with money". Finally - "dress how you like and be yourself" - yeah, that's what people USED to do; not anymore. Now they all don the same brand names and dress the way the magazines and shop windows tell them to; no one puts clothes of different eras together any more, or makes their own fashions; their bland sameness fits right in with the 7-11 mindset they all have, since chain stores all look the same, too. If you had any sense of history or the past you might have understood the point Gail was trying to make, however, from your reply, you seem to be one of those clones who probably considers individuality a disease to be shunned rather than a lifestyle to be celebrated.

Few people have style I would say, people that do get my attention and I often compliment someone that has it going on. I think kids these days think tatts make them unique and individual but I think it makes them look desperate to fit in and typical in the worst way.