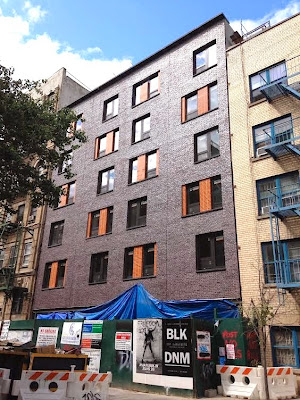 The scaffolding and construction gear recently came down at 535-537 E. 11th St. near Avenue B.

Subsidized by HPD's Supportive Housing Loan Program, the 8-floor Mary Spink Apartments will feature 46 units of affordable housing for formerly homeless and mentally disabled East Village residents. The studio apartments "will allow the residents to learn to live independently in a nurturing environment," according to a description of the building at the website of Edelman Sultan Knox Wood Architects.

In a response to the needs of the community, a connection between E. 11th Street and Joseph Sauer Park, located on E. 12th Street and abutting the rear yard, has been incorporated into the design. During the day, the public can access the park from 11th Street via a passageway running along the east side of the building. Additionally, a public toilet has been located at the rear of the first floor and can be accessed by both the building residents and community members visiting the adjacent park. 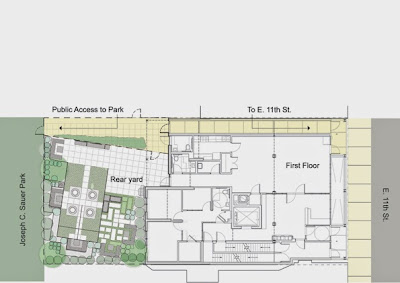 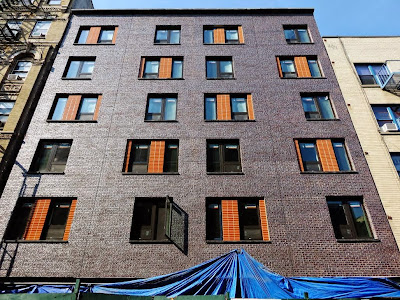 Your guide to construction hell on East 11th Street
Posted by Grieve at 5:09 AM

The idea of the 11th street entrance into Sauer Park which is officially a children's park / playground (there is a sign on the 12th street entrance stating adults must be with a child to stay) is a terrible. Everyday the parks department opens and locks the gates on 12th street at dusk sometimes a little later, and check the park for stragglers. The 11th street entrance will add an element of risk, will it be locked each evening, will the bathroom be monitored and by who? Will the parks rules which include "no dogs allowed" be posted on the 11th street entrance and will this second entrance provide an easy escape route for thieves? These decisions should not have been made without getting those that actually got Sauer Park turn from something of a shanty town to a children's playground it is today, the 12th Street block association.

seems like a strange place to have a park...oh hey kids go play near the crazy people...seems safe...oh and theres a bathroom too...

wont be long before something goes wrong here

Why assume mentally disabled people are a risk to children? If there's an adult with them, what's the problem? I'm disappointed by these NIMBY comments.

ugh. a park. we need more bars. that will make the neighborhood better.

Seriously, the narrow space or alley leading to the children's playground from 11th street is a terrible idea. I cannot believe nobody has tried to stop this from happening. If you have ever taken a kid to a playground you would know how quickly and easily they can disappear. I child leaving from the 11th street exit will not be noticed unlike the highly trafficked 12th street entrance. This new access has potential disaster written all over it.

I agree with Jill W. these comments are way off. FYI the mentally ill already live in the hood, they just don't have apts or supportive resources as they will in this complex. This is exactly what the East Village needs - housing for those who need it. Trust me, the residents of this bldg will be far less troublesome then the woo hoo plague we currently endure.

The building should not have been allowed to be 8 stories plus. It's hideous.

Hey anonymous with kids, before long, your kids will grow up and you will not care anymore about this park ( or any other). However for us that live in the neighborhood, this is something we have requested for years and glad we finally have it. Also, it is nice to see that that there is options for the less fortunate. The good news it that it will keep the yuppies, the all entitled families and hipsters away as, like you, they will be scared of the "mentally ill=criminals" that will be scouting the dark and creepy passageway for little children to eat.

Access from 11th Street is neither needed nor desirable. Once parents of the kids who attend the schools in the area get wind of this, that'll be the end of talk about an 11th Street entrance.

I agree with Anon. 11:30, this is a Godawfully ugly building. Who the hell thought that bricks the color of dried blood would really go with Halloween orange accents?!? I mean, come on, we have to LOOK at this every day!

Homeless people, mentally ill people, a park, a public bathroom with full access frm the park and adjacent building all in a building paid for and run by a NYC beauracracy. What could possibly go wrong?

HUMAN COMPASSION!!! THAT IS WHY!!!

Isn't anyone concerned that children may not want to share their park with mentally ill patients not to mention their school is on that black too and, due to condo construction they have no school playground and use sauer park for recess

Thus sounds like an onion article. Truth is stranger than fiction