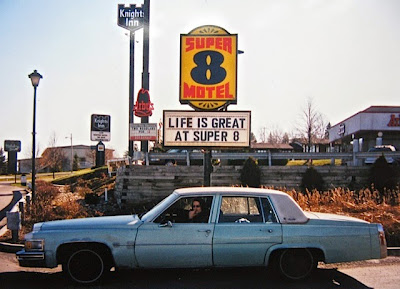 • Current owner is the 3rd owner

• Most memorable road trip moment: Crossing the state line into Alabama while my owner sang the line from Neil Young's song, "Alabama": "...Your Cadillac has got a wheel in the ditch and a wheel on the track..." until his cat pawed him in the face to get him to shut up

• Estimated number of photos taken of me by passersby each week: 350-650

• Most mysterious photographer: A woman who took one photo of me every day for a year and then she vanished

• The Tiger decided to get a gold leash when the Lorde song, “Royals,” was released.

• Vandalism damage since the tiger has been in the front seat: $0 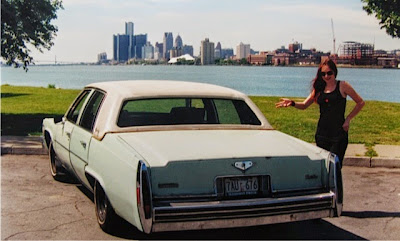 Also! The Cadillac with the Tiger in it now has its on website. Find that here. 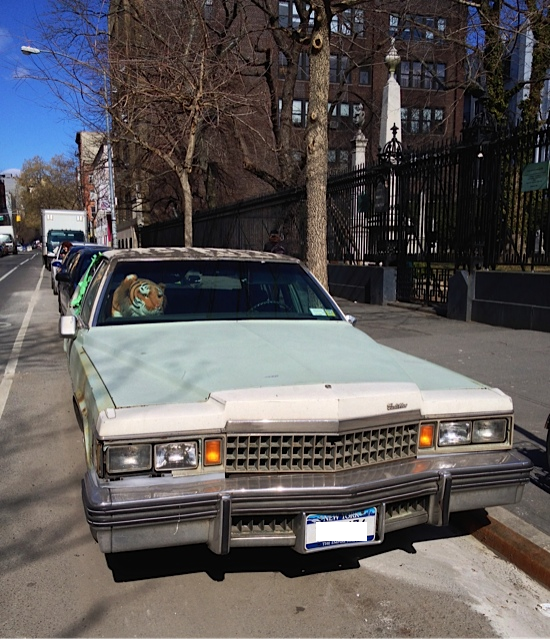 i have never met the cadillac with the tiger in it but i will miss him(?).
have a good trip.

Another fabulous piece of the EV moves on! Goodbye Tiger, Goodbye Cadillac! We who have love you from a far will miss you. Thank you for all the years of joyous existence. xxxxx

That's my block - I salute that Cadillac every day. I got to see it float away on a flatbed truck a few minutes ago. Sorry to see it go.

I once had a neighbor who collected various non-fuzzy creatures, like lizards and snakes. His car was so old that the door locks didn't work. Still, to make sure no one would steal the car when parked in a crime-ridden neighborhood, he would brink along one of the massive snakes (python? boa? don't recall), which would coil itself around the passenger seat and sleep. No one ever touched the car. Needless to say you could leave a $100 bill on the dashboard and it would still be there when you returned (unless the snake went on a bender).

Thank you for putting a smile on my face everytime I walk pass.

Why? Why? Why? Another loss, small but so indicative...I hope the blog continues so we can keep track of Tony and Caddy's whereabouts.

Aww, I'll miss Tiger Cadillac. I loved seeing it every time I walked past the cemetery. Happy trails!

Are there any reports/pix from the party this past weekend? I couldn't go. If anyone has anything please post.

the Cadillac with the Tiger in it said...

I thank all of you who have expressed interest in my stories. I made it safely to my new location and Ernest is taking good care of us. Soon I will update you all with photos and info about the farewell gathering which was wonderful. But the tiger and I need to rest a little first---we've had a long journey and a lot of excitement the past week!