Looking at The Fourth's sidewalk cafe 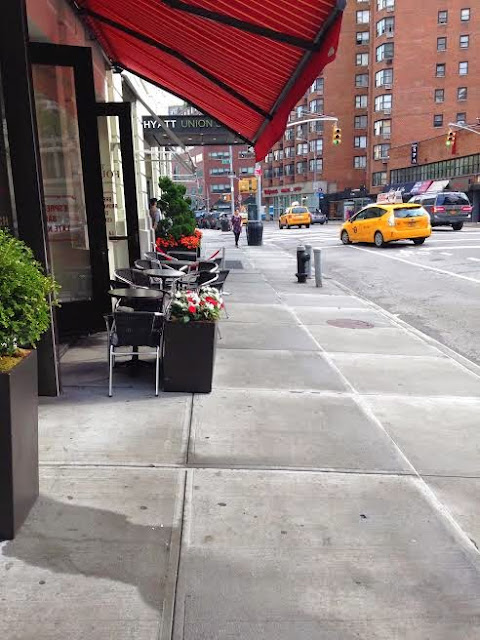 As you may recall back in April, several residents had concerns about the proposed sidewalk cafe at The Fourth, the ground-floor restaurant located in the Hyatt Union Square on Fourth Avenue and East 13th Street.

The matter eventually went to City Council, who OK'd a smaller, 12-seat cafe.

Anyway, the cafe made its debut the previous weekend… not really much to look at. From either vantage point. 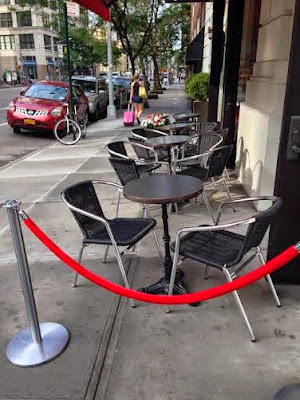 Previously on EV Grieve:
Concern over a proposed sidewalk cafe for The Fourth on 4th Avenue (20 comments)
Posted by Grieve at 4:55 AM

Email ThisBlogThis!Share to TwitterShare to FacebookShare to Pinterest
Labels: sidewalk cafes, The Fourth

I walked by this "cafe" seating and thought the people using it looked uncomfortable and caged in, sometimes there are limits to how fabulous you can make the EV.

After 4 or 5 cocktails, even Bushwick looks fabulous.

Fourth avenue as with many avenues in lower Manhattan are so congested with traffic that sitting at that outdoor sitting area must come with a complimentary side order of carbon monoxide! YUCK

Don't order soup if you are sitting at a sidewalk table. Check out the pitch on those table tops!

Seconding Olympia's point, those tables are giving me vertigo. If you order their sliders I bet they will literally slide all the way onto 4th Avenue.