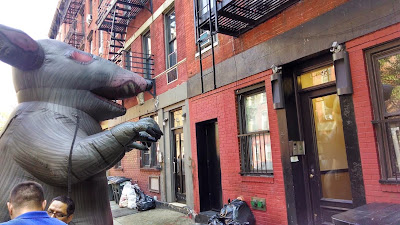 The inflatable union rat was back out this morning at 515 E. Fifth St., where landlord/developer Ben Shaoul continues to fight for a zoning variance that would make legal the illegal addition that he added in 2006.

An EVG reader sent along these photos ... and the flyer explains the presence of the rat ... 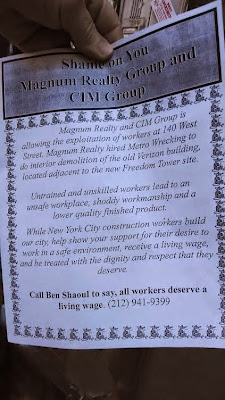 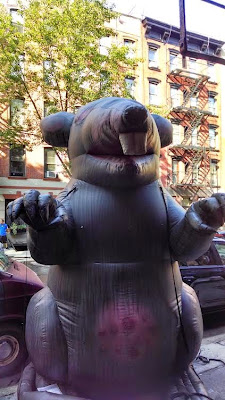 As for No. 515 here between Avenue A and Avenue B, they'll be another Board of Standards and Appeals hearing about the illegal addition on July 15.
Posted by Grieve at 11:27 AM

Magnum. You know that douche got the name from a Trojan condoms box. You know, because they are the x-tra large size. Or from the big champagne bottle size, because that is totally baller. Whichever, he didn't take it from his Latin studies, because anyone with Latin 101 knows that magnum is the neuter form of the word meaning "great". Magnus is the masculine.

Why, this just can't be the Ben Shaoul that we all know and love. He's such a great guy, a true humanitarian of the E.Vill. And his flunkie - sorry, assistant, Josh - what a nice, well-mannered young man.

So, apparently the Board of Standards and Appeals is harder for Shaoul to "influence" than the rank-and-file DOB inspectors?

Also, is this guy Shaoul still being sued by his parents over finances? Haven't heard anything about that in a while.

so. WHO is in charge of ok-ing this? WHO would allow this corruption to continue now?