A really good time to open a bar for Argentina fans 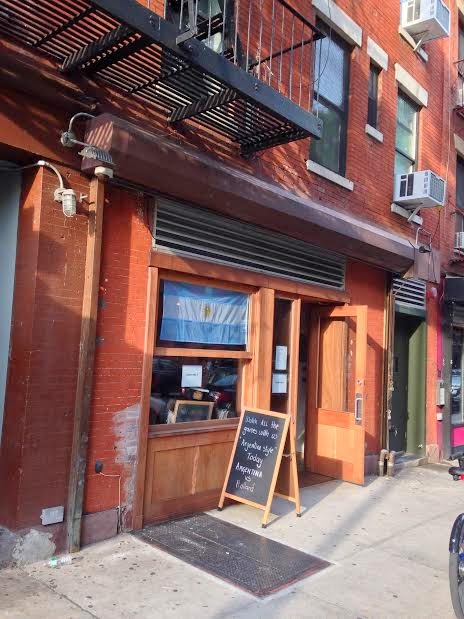 Several EVG readers pointed out that a new Argentine-based bar/restaurant has opened at 509 E. Sixth St. between Avenue A and Avenue B ... and fine timing given that Argentina and The Netherlands were playing for a shot at the World Cup finals vs. Germany yesterday. (Spoiler: Argentina won in penalty kicks.)

The new space is operated by the folks behind the Buenos Aires Restaurant at 513 E. Sixth St. For now, the new place has a limited food menu as well as wine and one brand of beer (Quilmes) ... and it is cash only.

EVG reader Riley McCormick, who first tipped us off about the place, stopped by and noted that the bar won't be open again until Sunday for the World Cup final.
Posted by Grieve at 4:59 AM

Just great. Buenos Aires is already a pain in the butt for us on this block. Often during lunch time, multiple (6-7) cars with diplomatic plates arrive and drivers wait double-parked on the block for an hour or so, until the guest they brought is finished eating. The issue of diplomat cars breaking NYC laws and paying no tickets is well known, but it hits particularly close to home when they do it repeatedly on your block with total impunity.

Start throwing things at the diplomatic cars - create an international incident by these diplomat fucks who abuse diplomatic privilege.

You can tell Anonymous is a REAL EV resident using any given chance to bitch about something in the neighborhood.

Having spoken several times with the owner, I seriously doubt that will be a permanently open bar. He'll most likely open it only for certain events, such as the soccer tournament.
And I'm glad Braz(s)il's collectivist, socialist ass got kicked by quasi-free market Germany. I'll be rooting for the Germans over state socialist Argentina.