The 76-year-old bowling alley at 110 University Place between East 12th Street and East 13th Street is leaving along with other businesses in the building to make way for a new, unspecified development from landlord Billy Macklowe.

"All we know is [Macklowe] did not want to extend our lease no matter what we did," Colie Edison, Bowlmor's vice president of marketing, told Danielle Tcholakian at DNAinfo.

The Times stopped by yesterday to find workers already ripping up some of the lanes.

And the Daily News recalls some of Bowlmor's less-glamorous times.

"I love this place," said Andres Restrepo, the Bowlmor district manager. "We've had families with four generations of bowlers coming here to hang out on a Sunday. Grandpa tells about times when Union Square wasn't the safest time, then his son talks about the 1980s.”

Indeed, in the bad old days, a manager was once murdered in the alley. But more recently, the lanes have been a glamorous haunt for A-listers such as the Strokes, Sarah Jessica Parker, Jimmy Fallon and Al Pacino.

And here is the official goodbye from Bowlmor via Twitter: 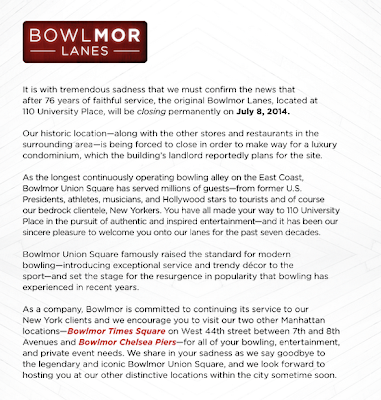 Like Bereket on Houston, this was one of those places that seemed ageless and would always be part of NYC. But the Manhattan heroin economy will not allow anything that does make heroin style profits. I used to use "heroin economy" as a metaphor but apparently much of the real estate churn here is being pushed by money laundering efforts from abroad.